His first season as a general manager in the Ontario Hockey League was full of learning experiences for Kyle Dubas
Nov 21, 2020 12:00 PM By: Brad Coccimiglio 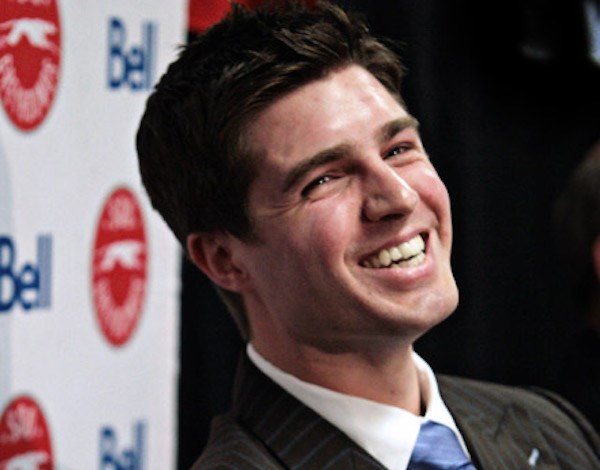 Kyle Dubas is pictured in this SooToday file photo.

Hired by the Ontario Hockey League’s Soo Greyhounds as general manager in April 2011, Kyle Dubas was a 25-year-old taking on a new role after spending time as a player agent following his graduation from Brock University.

It’s nine years later and Dubas is preparing for his second season as general manager of the NHL’s Toronto Maple Leafs and he’s certainly learned a lot along the way.

Now 34, Dubas said in a recent interview that his first season with the Greyhounds was one that taught him a lot.

After taking over as general manager of the Greyhounds, the team went through some struggles in that first season, one in which the team missed the playoffs with a 29-33-2-4 record.

Reflecting on the experience, Dubas said it taught him how to adapt.

“What I learned in that time is that things are not always going to go as you may plan right off the hop,” Dubas said.

“More than anything, what’s going to be tested is your conviction and your belief in your own philosophy and plan,” Dubas also said. “You have to adapt and you have to evolve, but what I learned in the Sault most in going from 2011-12, or even early in 2012-13 where we got off to a poor start again, was that you really have to block out the opinions of everybody else and stick with what you believe in and stand by your convictions.”

The struggles early on in the 2012-13 season led to a coaching change.

That coaching change saw Dubas replace Mike Stapleton with Sheldon Keefe and the hire saw some criticism at the time.

After Keefe led the team to a 54-12-0-2 record in his final season with the Greyhounds in 2014-15, Keefe was reconnected with Dubas in Toronto after being hired as head coach of the Maple Leafs American Hockey League affiliate.

The pair ultimately ended up in the NHL after Keefe was named the Maple Leafs head coach last season, replacing Mike Babcock behind the bench.

“At the time we were 24th or 25th in the league by winning percentage and from that point on to the end of the year, but especially early on, the difference that he made was massive,” Dubas said. “Sheldon, despite coming in with one pre-game skate in Arizona to get the group ready and having to kind of do things on the fly, really did a good job stabilizing the group.”

Dubas also said Keefe made good use of the time in between when the NHL regular season was paused due to COVID-19 in March and returning to playoff action in the summer,

“He did a great job during the pause in establishing the way he wanted the team to play in the long run,” Dubas said. “Not just for the return to play in the playoffs, but how we were going to transform ourselves in the long run and really maximize the talent in the group that we have here.”

“My favourite part about working with Sheldon is that he and I, more than anyone else that I’ve worked with, can have massive disagreements and we can really challenge and get at one another, but it never impacts our relationship the next day,” Dubas said.

“We can challenge one another or question one another, and it never becomes a personal or hostile situation,” Dubas added. “We can get into some pretty heated debates and arguments and the next day we know that we’re doing that because we both want the same thing. We want the team to be successful. We want the team to grow and the team to improve. That’s really where I realized that this was going to be a relationship and a partnership as a manager and a coach that was going to be successful early on in our time in the Sault together.”