North Stars within a win of league championship

The Soo North Stars find themselves just a single victory away from claiming a Great North Midget League championship.
Mar 14, 2004 12:40 AM By: Ken Hilderley 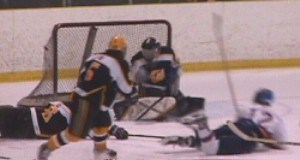 The Soo North Stars find themselves just a single victory away from claiming a Great North Midget League championship.

Playing in what is likely to be their last game on home ice this season, the North Stars once again flexed their offensive muscle and rolled past the New Liskeard Cubs 8-3 on Saturday night at the John Rhodes Community Centre.

"This is exactly what we were looking for," said North Stars head coach Mike Hall. "The last thing we wanted to do was go up there with a split. (New Liskeard) is playing better hockey than the last time we seen them."

The series shifts to New Liskeard for game three on Friday night. Game four, if necessary, will be played on Saturday. If a fifth game is required, the teams will return to the Sault for a 7 p.m. contest at Memorial Gardens on Tuesday, March 23.

The GNML champion will advance into the National Midget Hockey Championship Central Regional Playdowns beginning March 28 in Belleville. The national championship tournament will be held April 19-24 in Kenora.

Michael Sharp returned to the North Stars lineup for the game two on Saturday and led the offensive display with three goals. Sharp sat out the opener with a one-game suspension for a slashing incident in game three of the GNML semi-finals against Kirkland Lake.

Michael D'Agostini opened the scoring 6:52 into the game when he ripped a shot between the legs of New Liskeard goaltender Dominic Leveille.

New Liskeard tied the game with 1:06 left in the first period while short handed when Justin Maille stripped the North Stars defense and beat North Stars goaltender Michael Maulucci with a back hander on a breakaway.

But the North Stars quickly stuck a dagger in the Cubs efforts by scoring with 22 seconds remaining in the stanza to take a 2-1 lead as Sharp completed a two-on-on break with Tyler Gendron.

Zack Torquato increased the lead to 3-1 in the second frame after banking a shot off Leveille and into the net.

Paul Dupont added a power play marker later in the period after skating uncontested into the slot from behind the net and ripping a shot up high on Leveille.

Matt Caria scored a short handed goal with 5:01 remaining in the period to chase Leveille to the bench for the second consecutive game. Sharp added his second before the period was out to give the Soo a 6-1 lead.

"I think we showed them in the second period exactly what kind of explosiveness we have," said Hall. "When they want to turn it up they just go. We laid back in the third and trapped them and they had a difficult time with it."

"The big thing is that we were able to hold their top scorers in (Brandon) Christo and (Alain) Duguay without a point this weekend. We were also able to chase their starting goaltender in both games and think that might hurt their confidence."

Sharp's third goal of the game in the final period was a highlight reel performance as the speedy forward cut across the middle of the ice and fired a shot past Philip Hawken while falling to the ice.

"Michael Sharp showed what he means to this team. We missed him last game and other people filled his role but he is a big part of this team. I think he wanted to make up for the bad penalty he took in Kirkland and his last goal was a highlight one," said Hall.

"We came into the second period down to only seven forwards and five D after we lost our top defenseman. That hurt us and they were able to take advantage of it," said New Liskeard head coach Darrell Christo.

"We're not throwing in the towel by any means. We play well and home and we beat them at home so we're still hoping to win this in five."

Nathan Norton and Danny Loach scored for the Cubs in the third period.

Caria and Gendron recorded a pair of assists for the North Stars while Maulucci recorded the win in net. Travis O'Brien replaced Maulucci for the third period.

PHOTO: Michael Sharp (#12) watches his highlight reel goal dent the back of the twine behind goaltender Philip Hawken in the third period.