While the Soo North Stars should have been celebrating the fact that the team has grabbed a strangle hold on their Great North Midget League semi-final series, the focus was instead on how they were going to stay out of trouble.
Mar 1, 2004 1:21 AM By: Ken Hilderley 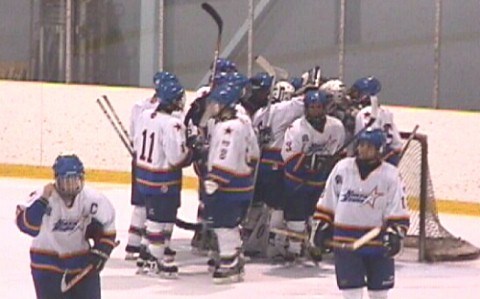 While the Soo North Stars should have been celebrating the fact that the team has grabbed a strangle hold on their Great North Midget League semi-final series, the focus was instead on how they were going to stay out of trouble.

With a pair of lopsided victories over the Kirkland Lake 87's by scores of 8-2 on Saturday and 7-1 on Sunday, the North Stars have a commanding 2-0 lead in the best-of-five semi-final.

On Sunday with the North Stars beginning to run away with the game in the third period, things became ugly.

Stick work, verbal assaults, scrums after the whistle, chirping between the benches and demonstration marred the final period of play as players on both sides became more concerned with personal scores than team scores.

In all, Kirkland Lake was assessed 48 minutes in penalties, with the vast majority coming in the third period, plus an additional three 10-minute misconducts. The North Stars took 32 penalty minutes plus three misconducts.

Before the melees, Kirkland Lake had managed to hold the North Stars in check through two periods.

"I didn't think we had a great first two periods out there and we weren't skating," said North Stars head coach Mike Hall. "We told the players before the start of the third period that we were two practises away from being out the playoffs going up there to play two games after a split."

"I don't think the series is going to change much going up there so we are going to have to be a lot more disciplined. It goes both ways and I'm not going to say that are team is a bunch of angels.

"That's not how you play hockey and we have too much talent on this team to play that way. They may be able to be us physically but they have to beat us on the scoreboard to win."

Adam Kauppi opened the scoring for the North Stars on the power play for the only goal of the first period. Kauppi's shot barely crossed the line and the officials needed to conference before finally deciding to count the goal.

Tyler Gendron put the locals ahead 2-0 in the second period as Shaun Siemers fed Tyler Gendron, who speeded into the zone and beat Kirkland Lake goaltender Brian Owen with a bad angle shot along the ice.

But the Soo exploded in the third period with five goals in the first 9:40.

Michael Sharp, who also added an assist in the game, scored on the power play 53 seconds into the frame before Kauppi notched his second on a breakaway 57 seconds later.

Sharp later added his second of the night on a breakaway, Michael D'Agostini, who also recorded an assist, scored one and Kauppi recorded the hat trick with another power play effort.

The final three minutes of the game saw both teams rag the puck in their own end. The North Stars began by cycling the puck behind their own net while on the power play.

Kirkland Lake responded by holding the puck behind their own net for much of the final minutes as the North Stars stood in the neutral zone.

"We weren't trying to embarrass them but I wasn't willing to risk anything at that point. We could have run up the score and kept coming at them but we just passed the puck around behind our net and I don't know if that frustrated them or not," said Hall.

"I didn't want a kid taking a two-hander or getting run because we are trying to push the puck up ice. We have lost two kids this year in that situation where the score is out of hand and we tried to push it up ice."

In Saturday's contest, the North Stars took a 2-1 first period lead and extended the margin to 6-1 after two periods.

Sharp led the offense with three goals and an assist while Matt Caria scored a pair. Matt D'Agostini scored once and added four assists, Gendron scored once and setup two others while Kauppi scored another.

Michael Maulucci, who went the distance in Sunday's contest, played the first two periods in goal for the North Stars before Travis O'Brien entered the game in the third period.

In the other GNML semi-final, the New Liskeard Cubs have taken a 2-0 lead over the Kapuskasing Flyers with a 4-2 win in the series opener on Friday before squeaking out a 4-3 victory on Sunday at home.

Game three is scheduled for next Saturday and game four, if necessary, on Sunday in Kapuskasing.