Greyhounds general manager Kyle Raftis also talked about the import player situation for the club on Thursday
May 13, 2021 10:21 PM By: Brad Coccimiglio 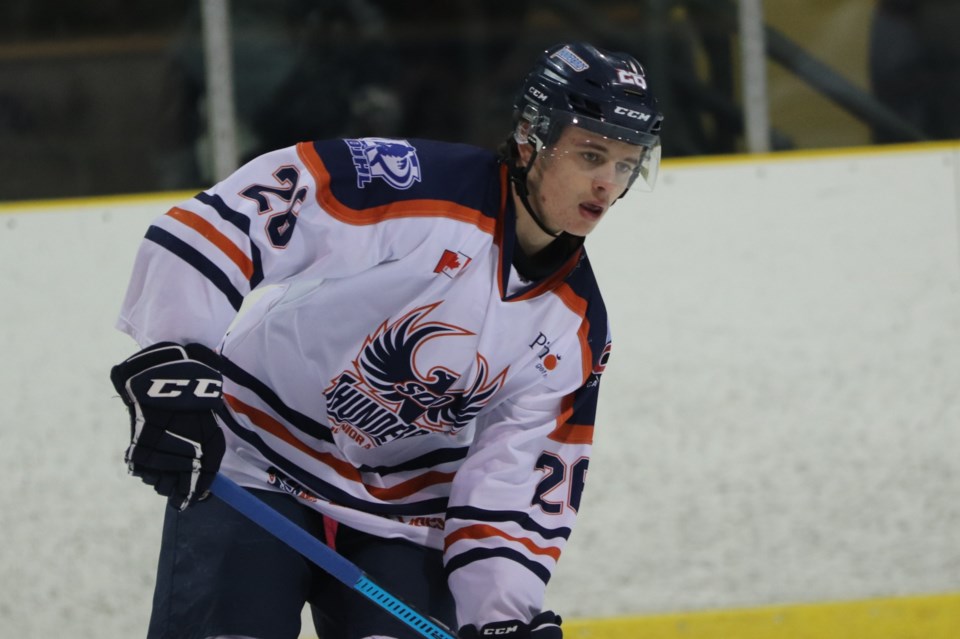 Tyler Savard as a member of the NOJHL's Soo Thunderbirds. Brad Coccimiglio/SooToday

As the team continues to prepare for a return to the ice, the Soo Greyhounds inked three players they hope will be important pieces when the 2021-22 Ontario Hockey League season begins.

On Thursday, the Greyhounds announced the signings of forwards Tyler Savard, Jordan D’Intino, and defenceman Luc Brzustowski, all members of the clubs 2019 draft class.

The signings were something that had been in the works for some time.

“We had worked toward signing them when we had thought we were going back and it got close throughout the year,” Greyhounds general manager Kyle Raftis said. “It wasn’t something that just got done.

“It’s important that we sign them based off what they did as a 16-year-old and their 17-year-old year has been tough, but at the same time, it’s important for us to bring in that next wave of players. They’re going to be a big part of it.”

All three players were regulars as part of the Greyhounds meetings as the team waited to begin the 2020-21 OHL season that never was.

“They were on all of our Zoom calls all year,” Raftis said. “They were part of anything that we were discussing. We were hoping they could get some more familiarity with the organization.”

“As much as we can bring everybody up to speed as quick as possible,” Raftis said. “There’s going to be lots of video and lots of stuff going on. It’s easier to make adjustments when you’re on the ice and comfortable with everybody. That’s going to be the way for any first-year player, whether you’re coming in through a trade or whatever it might be. There’s always an adjustment period, but you’re hoping you can skip some of that other side of it.

“As we go through the summer, you’re going to look at a rookie class that’s going to have ’03-born players, ’04, and ’05 players. It’s kind of a weird term. There’s a lot of new faces there. It’s about building up the confidence of those players, so when they come, they can step in and make an impact as soon as possible. That’s something that you’re trying to lay the groundwork for. An extended training camp at the start of next season is going to be a bonus for us to get everybody on the same page and pulling in the same direction.

Savard, the son of former NHL forward Marc Savard, was an 11th round pick by the Greyhounds and joined the Northern Ontario Junior Hockey League’s Soo Thunderbirds after being selected.

“With Tyler, he’s always been a very creative player,” Raftis said. “He’s got great skill. He’s somebody that can make plays constantly, whether it’s through traffic, along the wall or setting up around the net. He’s got a real nose for getting to those dirty areas. He adds that bit of grit that’s very hard to teach in a player.

“He’s very competitive,” Raftis added. “When you get to know him more, anytime he’s talking about any other sport or whatever it might be, he’s a competitive kid and those kinds of traits are going to benefit him. We’re really excited to add him. He’s been putting a ton of work into his skating. That was something that he wanted to work on in this last year and he’s done a lot to it.”

Selected in the fourth round of the 2019 draft, D’Intino said in a prepared statement that he’s “looking forward to being part of such a good, up-and-coming team.”

D’Intino spent the 2019-20 season in the Greater Ontario League with the Strathroy Rockets where he scored 16 goals and 32 points in 39 games.

“Jordan’s a good-sized forward,” Raftis said. “He can play centre and play the wing. He’s got really good offensive instincts. He controls the puck really well. He’s got a good shot. He’s got a really good head for the game and when you see that sense, we like the skilled package in terms of what that size brings.”

“We were hoping that he was going to step in at 17 and open up some eyes and be an NHL draft pick and unfortunately that didn’t happen (because of the cancellation of the season),” Raftis added. “We’re hoping he can take that next step as an 18-year-old and help us fill the void of some of the older players that are graduating.”

A sixth round pick, Brzustowski also made the jump to the GOJHL after his minor midget season, playing in 48 games with the Kitchener Dutchmen where he scored five times and assisted on three others.

Prior to joining the Dutchmen, Brzustowski impressed the Greyhounds brass during his first major junior training camp.

“He was really good in his first training camp with us,” Raftis said of the blueliner. “It’s a situation of the way he skates, and his mobility alone is something that is going to be a great tool to work with (associate coach Jordan Smith) on the back end. He’s somebody that can fill holes very quickly. We’ll see once he gets up to speed where he fits in, but it’s that ability to make good puck decisions at a real fast speed.”

“When you skate like he does and have some skill on the back end, he can really fill the gaps,” Raftis added. “For us, he’s somebody that can walk the line really well, help us through transition, and he can become that fourth member of the attack.”

All three players are expected to be in camp when it opens in early September after the OHL announced a planned start date for camps of Sept. 4.

The Greyhounds learned earlier this week that Czech-born forward Jaromir Pytlik signed with a team in the Finnish pro league.

Because Pytlik is a 2001-birth year player who would be an overage player next season, the Greyhounds will be able to protect the New Jersey Devils prospect and still use one of their two picks in the annual Canadian Hockey League Import Draft, which is slated to be held on June 30.

Raftis said Pytlik and his father reached out prior to the announcement to let the Greyhounds know of his decision.

“His dad reached out, he reached out, which is a real sign of maturity because sometimes players hide behind an agent and that’s not the kind of kid he is,” Raftis said, adding that the Greyhounds were supportive of the decision.

The Greyhounds hold the sixth overall pick in the two-round draft.

Prior to the draft, the team will have to make a decision on whether to protect goaltender Nick Malik and make just one selection in the draft.

“We’ll have to make a decision on what we’re going to do closer to the Import Draft,” Raftis said. “With a lot of the imports this year, even chatting with some agents, everybody wants to have a plan with the uncertainty.”

Raftis said Thursday the team would have to make a decision on whether to protect Malik on the Monday before the draft, which would be June 28.