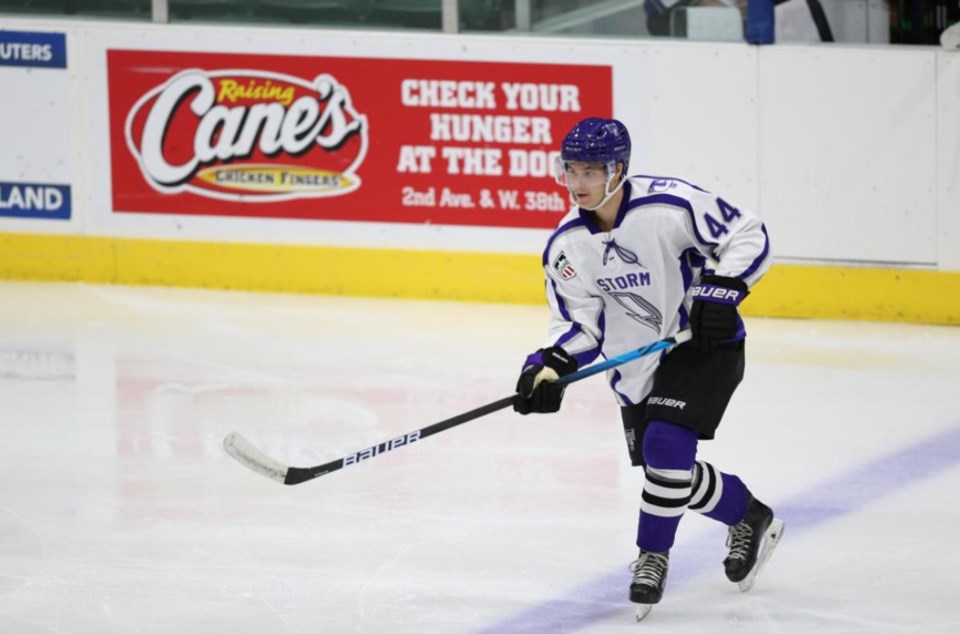 The opportunity was one that he felt would be good for him in the long run.

Sault Ste. Marie native Steven Bellini is currently in his first season in the United States Hockey League as a defenceman with the Tri-City Storm.

The move came after the 20-year-old spent last season playing in the British Columbia Hockey League with the Coquitlam Express.

The jump to the USHL this season has meant another opportunity to develop his game as he prepares for college hockey.

“People say the USHL is a little faster and more physical and a more consistent league,” Bellini said. “I feel like I wanted to develop myself more to be ready for college next year.”

“It’s definitely been a much quicker pace,” Bellini also said. “You have to be more consistent every night and play stronger and more physical all around.”

Moving to Tri-City has allowed Bellini to develop his game further. Bellini spent two seasons in the Northern Ontario Junior Hockey League locally with the Soo Thunderbirds before making the move to B.C.

With his new club in Tri-City, Bellini feels there are parts of his defensive game that have taken another step forward.

“I feel like my defensive game has gotten a lot better,” Bellini said. “I feel like I’m defending quicker, defending faster, and it helps me play on the offensive side of the rink.”

In is fourth season of junior hockey, Bellini noted the development of his two-way game.

Bellini’s defensive game is something that has continually developed over the past two seasons.

“His overall game just improved,” said former Coquitlam coach Jason Fortier, a Sault native who coached Bellini last season out west. “He was able to become a much more physical defenceman, which is something he’s going to continue to grow and develop. He’s a puck-possession defenceman, but his ability to defend really improved.”

“For him, the biggest development that we recognized was the ability to defend,” Fortier added. “All of the other attributes, they also developed, but that side of his game, he was good offensive when he came, but he needed to learn how to defend and play more physical. That’s generally the biggest thing that kids don’t understand is, they think because they have these set of tools and maybe they’re really fantastic if they’re offensive players, but if they can’t defend at the next level, they become irrelevant. They just become toxic for themselves because they just have to understand what the concept is of defenceman first.”

Bellini had nothing but praise for Fortier after playing for him last season.

“He’s a great guy on and off the ice,” Bellini said. “He’s a really hard-working coach. He’ll push you to your limits and definitely hold you accountable for your mistakes.”

“So far, it’s been great (playing for Noreen),” Bellini said. “He’s definitely a coach that will push you to your limits as well and hold you accountable.”

In five games with Tri-City this season as USHL regular season action got underway in early November, Bellini has been held scoreless but it’s something that Noreen said will come.

“I’m sure he’d like to have more numbers offensively and be contributing with some more production, but I think that’s something that will come,” Noreen said. “That’s something that will come as he continues to develop and continues to get used to the league. It’s not something we’re overly concerned with because we feel he’s been so effective as a two-way, veteran defenceman. He’s got a real special opportunity with us. It’s a unique program where our guys are on the ice two times minimum per day. If they want to be on the ice ten hours a day, they can. There aren’t many places where you can do that. We own the rink and we do a skills session every morning. They’re in the weight room every morning. They’re doing a video session in the morning.

“It’s a hockey factory, and for someone like Steven and guys that take advantage of that, we really seem them grown and develop over the course of the year,” Noreen added.

In addition to his offensive ability, Bellini has been a steady presence everywhere he’s played.

“He’s brought stability and a veteran presence to our back end,” Noreen said. “I don’t care what junior leagues guys come from maybe outside of major junior, typically when guys come to the USHL, it’s no different than coming to the Ontario League or the Western League, there’s an adjustment period, even if they have played junior hockey in the past.

“What I would say it most impressive about Stevie is that he’s come in and he’s just been a solid, veteran, two-way, effective defenceman for us right from day one,” Noreen added. “We’re a team that we’ve got some younger guys, especially on the back end. That was the reason we drafted him where we did was that we needed a guy that we knew could come in and eat minutes and just plug him in anywhere. He can kill penalties. He can play on the power play. He can play against other teams top lines. He can break pucks out. All of the things that we value in a defenceman, he’s been able to do right from day one.”

For Noreen, Bellini’s ability to move the puck stands out in his game.

“He’s a guy that, it’s a really good feeling as a coach when you’ve got a defenceman that when the puck is on their stick, you know something good is going to happen,” Noreen said. “The best thing I could say about Stevie is when the puck is on his stick, the puck gets advanced. The puck gets broken out. The puck gets dumped in if it needs to be. He’s just a really solid, effective puck-moving defenceman. That’s the modern-day defenceman. He’s the guy that can skate, can join in on the offence and at the end of the day, he’s the guy that gets the puck up the ice and allows you to play fast and get transition going north.”

“He’s a cerebral defenceman,” Fortier said. “He plays with his head up. He’s got a good skating stride and he plays with a good pace and he can play at various speeds. When he first came to us, he wanted to play a slower game, a little bit more poised game, but then he had to raise the pace just because the league was faster. He was able to adapt quickly. It’s one thing to have a good stride and it’s another thing to have a guy that can blast the puck, but he’s got a pretty good shot and his IQ really does help him. He can assess situations quickly and more times than not, he’s making the right decision.”

Next season, Bellini is set to make the jump to college hockey where he will play at Minnesota State and the excitement is mounting for the Sault product.

“Their hockey program is amazing and on top of that, they have really good academics which made it an easy decision for me,” Bellini said.

The Sault product said he hasn’t decided on his major at Minnesota State yet, but said he’s “looking toward an engineering program, maybe electrical engineering.”

As he prepares for the jump to college hockey, Bellini said he’ll look to continue his defensive development this season as well as maintaining his offensive abilities.

Noreen credited Bellini for looking to challenge himself further prior to making the jump to college.

“To move down to the States, take the next step, and challenge himself before going into school and play in the USHL for a year, if you look at it historically, typically guys that do a year or two years in our league, they usually hit the ground running walking into college hockey,” Noreen said. “I give him credit for challenging himself and coming down here and playing in the league. He’s going to a first-tier program with an unbelievable coaching staff that’s going to continue to develop him. They’re going to get someone that they know they can count on from day one in whatever that role might be.”

Fortier echoed the sentiment, noting that Bellini moved west without the guarantee of a roster spot in Coquitlam last season.

“He came with no guarantees,” Fortier said. “He came on a tryout. It was all because of Marc Disano and John Parco. They were willing to help him. He had won player of the year in the NOJHL and they wanted him to have a bigger challenge.”

And challenging himself is something Steven Bellini is continuing to do.