Nerves, excitement for locals on eve of OHL draft

Devin Mauro, Mason Chitaroni, and Connor Toms of the Soo Jr. Greyhounds are all expected to be selected on Saturday
0
Apr 3, 2020 10:44 PM By: Brad Coccimiglio 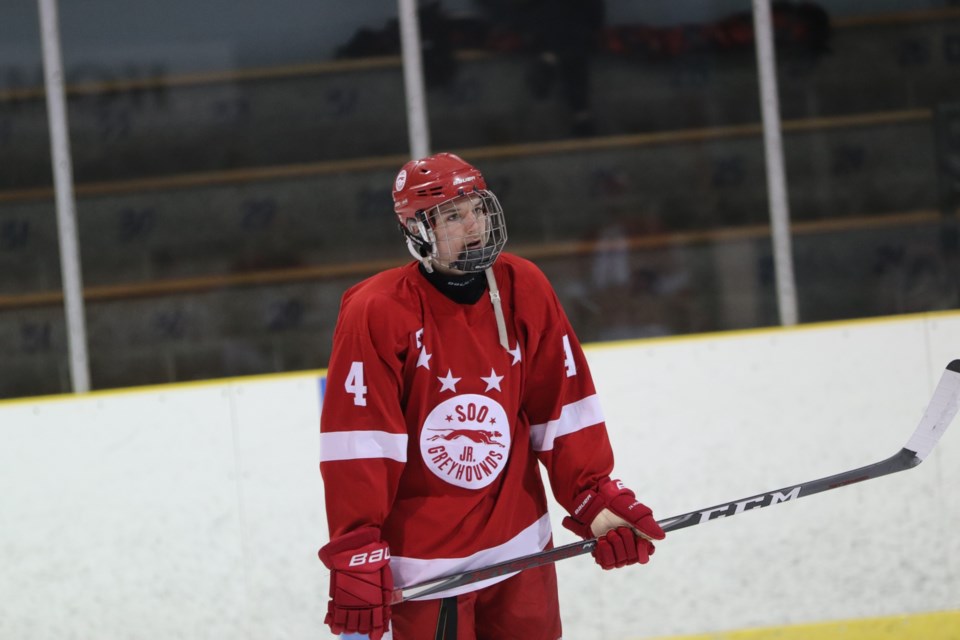 On the eve of the Ontario Hockey League Priority Selection, it’s a combination of nerves and excitement for a number of Sault Ste. Marie products who are expected to be selected in the 15-round draft.

The Great North Midget League’s Soo Jr. Greyhounds could see three members selected relatively early in the annual event, but it’s not making the situation any easier for the players.

“I’m so nervous,” forward Devin Mauro said Friday evening. “I’ve been thinking about it all day, which I probably shouldn’t be doing but I’m so nervous.”

Meanwhile, a pair of Jr. Greyhounds defencemen have drawn plenty of interest as well.

“I’m a little nervous but it’s a really exciting time and I’m looking forward to it,” Connor Toms said.

“It’s all excitement,” Mason Chitaroni said. “There are no expectations at all. It’s just watching the draft and seeing where I go and where my teammates go as well.”

For Mauro, his skill set had drawn interest from OHL teams and the young forward calls it his biggest asset.

“My ability to score and my speed and ability to beat defenders really stood out,” Mauro said.

“Devin has the ability to be a game-changer,” added Jr. Greyhounds coach Jamie Henderson. “When he decides to really be engaged, he’s got really high-end offensive instincts and some really gifted feet and he’s got a really good shot, which should be able to lead to some success at the next level.”

With the sport placing an importance on defencemen who can skate and move the puck, Toms fits the mold.

“Connor is one of those kids that loves coming to the rink,” Henderson said. “The offensive game comes naturally to him. He’s really poised with the puck and willing to join the rush or lead the rush at any point during the game. He’s pretty calm there on the back end and definitely will be a quarterback of a power play at the next level. His game grew quite a bit throughout the year.”

For Toms, the opportunity to play major midget helped develop his game, which revolves around three things, including his compete level.

“I love to go out there and compete,” Toms said. “My skating and playmaking really help me a lot.”

“It would definitely have to be my skating,” Chitaroni said of his strength. “I’ve been working on it a lot and it’s really improved, especially as my confidence grew as a player throughout the year.”

“Mason’s game has grown leaps and bounds,” Henderson said. “His confidence really grew in the second half of the season and you could see that trend on the ice. He really makes some good decisions with the puck and is pretty willing to engage physically in the defensive zone. His skating is world class and it really helps him get out of some trouble and get back to get the puck to the forwards. That’s his strength is getting back and getting pucks to forwards.”

Henderson added that Chitaroni “is probably one of the biggest risers in Ontario the last two or three months.”

Chitaroni said “a lot has developed” in his game this season.

“It was moreso gaining my confidence as a player, especially playing in a new league against new people and older guys as well,” Chitaroni added. “It was gaining that confidence and everything I could to be able to play at that level.”

Toms and Mauro agreed with the sentiment.

“It was really different to start,” Mauro said of playing in major midget. “I was playing against kids that were a lot bigger and stronger. They looked like men compared to the kids I played against before. After the first couple of games, I got used to it and I fit in.”

“It definitely helped me because they’re stronger and sometimes more skilled,” Toms said. “It was nice to play against older players because even on my own team there were older players and I could learn from them.”

For Henderson, the group of minor midget-aged players with the Jr. Greyhounds left a good mark on the program.

“We proud,” Henderson said. “It goes to show how committed that group of ‘04’s was this year, right from the summer camp and it also shows how committed they’ve been as hockey players the last few years. The credit goes to the kids because they put in all of the work.”

The draft, held via the OHL’s official website, is set to begin at 9 a.m. Saturday.