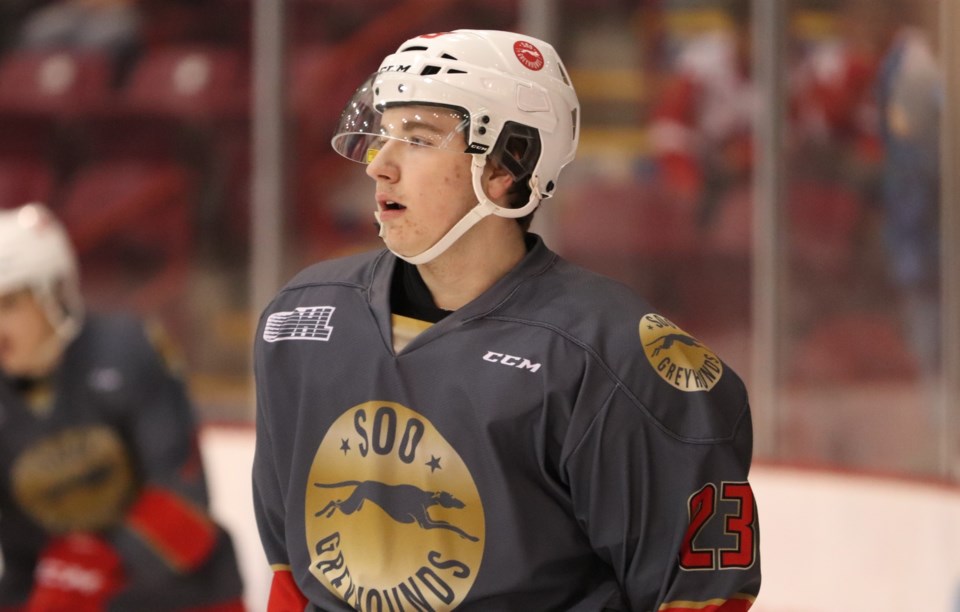 While they planned to honour their award winners at a banquet on the final weekend of the Ontario Hockey League regular season before COVID-19 put an end to that, the Soo Greyhounds announced their team award winners on Wednesday night.

Forward Rory Kerins was named the team MVP after scoring 30 goals and 59 points in 64 games in 2019-20, his second season as a Greyhound.

The 30-goal season was a 21-goal improvement from his rookie year.

“He’s very confident in his skill set,” Dean said. “What I liked about him this year was, we all know what a great playmaker he is and how smart he is positionally and his high hockey I.Q., but he started really demanding the puck in the second half of the season and he chose to shoot pucks a lot more.”

A new award was presented this season, the Dr. Lou Lukenda Memorial Award, which is presented to the player “that best exemplifies perseverance and dedication to hockey while overcoming obstacles to excel on and off the ice.”

Kerins was also named the Greyhounds Most Gentlemanly Player.

Overage goaltender Bailey Brkin is the first recipient of the award.

Acquired in mid-November via a trade with the Kingston Frontenacs, Brkin made the move to Ontario after starting his junior career in the Western Hockey League.

“Over the short amount of time that he was a Greyhound, he really brought some stability to the team when we really needed it coming out of that tough losing streak and put a lot of confidence in the guys in front of him that they could play a certain style and not worry about mistakes,” Dean said of Brkin. “There were some times when we challenged him and challenged him to make sure that he was the guy and he responded exceptionally well, even when we didn’t go to him a couple of times. That says a lot about his character and a lot about his confidence in himself. He would come back and put in a really good performance.”

Signed as a free agent prior to the season, Dickinson scored nine goals and 40 points to lead all Greyhound rookies in scoring and was named the Rookie of the Year.

Trott led the Greyhounds with 25 goals and 66 points in 62 games.

In his second season with the team, O’Rourke scored seven goals and 37 points in 54 games.

After scoring 18 goals and 50 points in 2019-20, defenceman Robert Calisti was named the Most Improved Player.