The Windsor Spitfires tied a Memorial Cup record originally set in Sault Ste. Marie during the 1978 tournament
0
May 21, 2017 11:15 PM By: Brad Coccimiglio 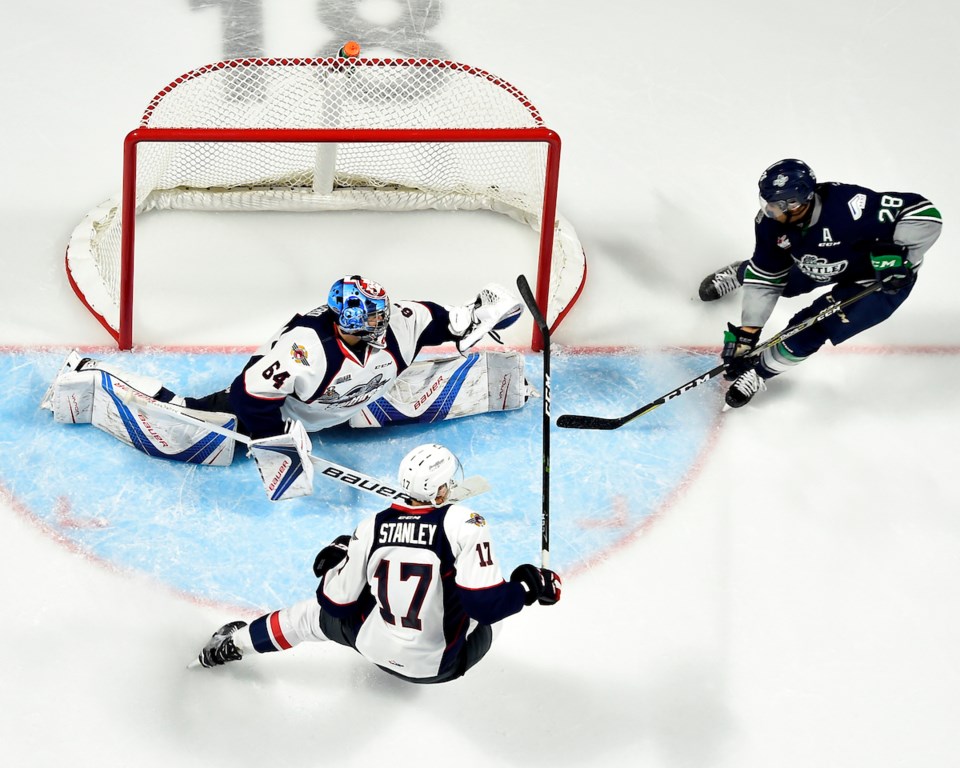 Action from Game 3 of the 2017 MasterCard Memorial Cup between the Windsor Spitfires and Seattle Thunderbirds on Sunday May 21, 2017 at the WFCU Centre in Windsor, ON. Photo by Aaron Bell/CHL Images

WINDSOR, Ont. -- Tying a tournament record put the Windsor Spitfires in the drivers’ seat at the 2017 MasterCard Memorial Cup on Sunday night at the WFCU Centre.

The Spitfires scored three times in 38 seconds in the opening period en route to a 7-1 win over the Western Hockey League’s Seattle Thunderbirds to move to 2-0 at the 10-day event.

“We were able to capitalize on some momentum tonight on those three shifts in a row where we were able to score those goals and I was able to come back with our first and second lines,” said Windsor Coach Rocky Thompson. “We had to get a big save early, right off the hop from Mike DiPietro. That was huge and it allowed our momentum to carry forth.”

The outburst tied a tournament record for the quickest three goals by a team, previously set by the New Westminster Bruins in 1978 in a 6-3 win over Trois Rivieres, a game that was held in Sault Ste. Marie at the old Memorial Gardens.

With the lead, the Spitfires were forced to kill off a lengthy 5-on-3 after penalties to Julius Nattinen and Adam Laishram.

Seattle would not capitalize on the two-man advantage, which saw the Spitfires get a key shot block from defenceman Jalen Chatfield followed by a sliding stop by Michael DiPietro on Ryan Gropp.

Windsor Coach Rocky Thompson called the blocked shot by Chatfield as a difference in the contest.

“Jalen Chatfield made an unreal save on the back door, which to me changed the game in our favour,” Thompson said. “We were in control but if that goal goes in, it’s a huge shift in momentum. You could see how dangerous Seattle can be in the offensive zone. That was a key there.”

Seattle would score later in the frame only to see Windsor score four unanswered goals to seal the victory.

Graham Knott paced the Spitfires with a pair of goals and an assist while Logan Brown also had three points with a goal and two assists.

“We knew they were going to come out flying after losing their first game so we wanted to jump on them early,” Brown said of Seattle.

Julius Nattinen also had a pair of goals for the Spitfires. Jeremy Bracco and Jeremiah Addison chipped in with a goal and an assist each for Windsor.

DiPietro made 24 saves for Windsor.

Keegan Kolesar had the lone goal for Seattle, who falls to 0-2 after losing to the Ontario Hockey League’s Erie Otters on Saturday night.

“Through the second period we were moving and skating and moving the puck the way we needed to to give ourselves a chance,” Konowalchuk said. “We were at a point where we were back in the game then we made a couple of mistakes but at times we were better than (Saturday night).”

Rookie goaltender Carl Stankowski got the start for Seattle but was pulled after Windsor's three-goal outburst. The 16-year-old made three saves before making way for veteran Rylan Toth, who stopped 18 of 22 shots the rest of the way.

Konowalchuk said he wouldn't commit to his starting goaltender for Seattle's round robin finale though.

The Spitfires now enjoy two days off before wrapping up the round robin on Wednesday night against the Erie Otters on the final day of round robin action.