Newly-signed prospect Bryce McConnell-Barker has been working out five times a week as he gets ready to join the Soo Greyhounds in the fall
0
May 17, 2020 7:00 PM By: Brad Coccimiglio 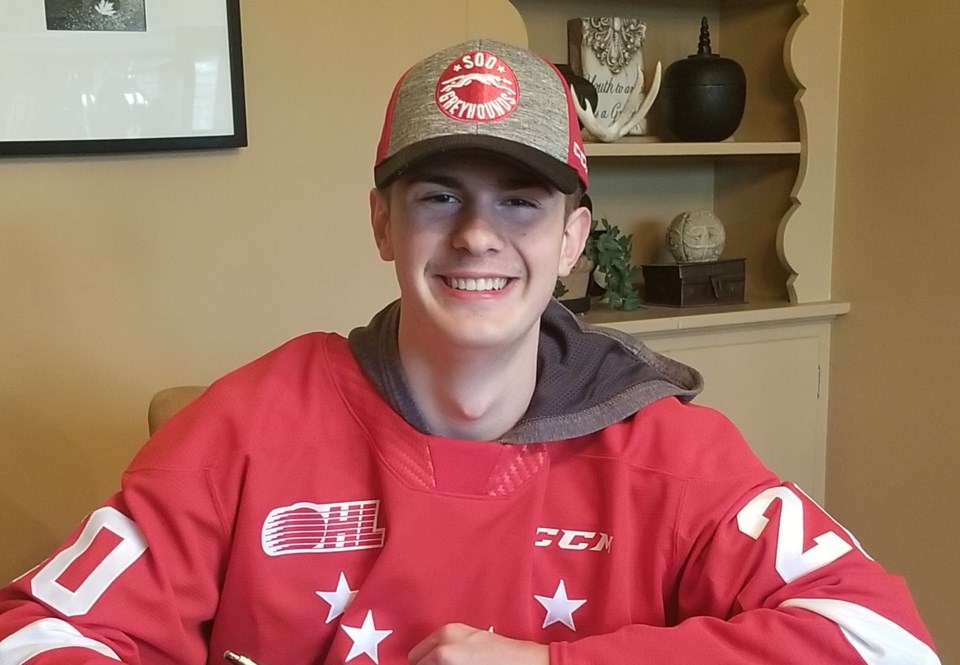 For Soo Greyhounds prospect Bryce McConnell-Barker, the off-season has remained busy as he prepares for his first Ontario Hockey League training camp.

The 15-year-old centre, selected by the Greyhounds fourth overall in the OHL Priority Selection in April, hasn’t let the COVID-19 pandemic slow his workout routine.

“I’ve stayed pretty busy,” McConnell-Barker said. “I’m working out five times a week, three times with my trainer. He brought all of his stuff home to his garage so me and my older brother Blake go and work out there three times a week. Then we have some dumbbells and a bench at home so we can do one workout at home a week. Then we do a speed/agility workout.

“I’m gaining some muscle and gaining some weight and getting my body ready for next year,” McConnell-Barker added.

Coming off a 30-goal season in minor midget with the London Jr. Knights, McConnell-Barker spoke of becoming a more consistent player this season.

“I was very consistent throughout the year,” McConnell-Barker said when asked of what developments he saw in his game in 2019-20. “Previous years, I had my ups and downs and wasn’t very consistent, but I worked very hard in the off season and was on the ice a lot in training last summer. I put in a lot of work to get to where I was throughout the season. My consistency changed and that’s what helped me bring my best every night.”

In 33 games with the Jr. Knights, McConnell-Barker finished the season with 49 points and added three goals and six points in six games with the Greater Ontario Junior Hockey League’s Komoka Kings.

“He’s smart. He’s got great speed and great skill,” said Greyhounds general manager Kyle Raftis. “He’s got an engine on him and as a centreman, he puts a lot of pressure on opposing defenders. He can really create space for himself.

“He’s someone that can create offence for himself and his teammates,” Raftis added.

Independent scouting service HockeyProspect called McConnell-Barker “an electric centre with a well-rounded game who pushes the pace and drives the offence for the London Jr. Knights.”

“His first step and jump are among the best in this draft class and you notice his effort with every stride he takes,” McConnell-Barker’s scouting report also said. “He can burn opponents to the outside but can also turn them inside out with the combination of his speed and puck control. He shows great acceleration and anticipation moving to the right areas at the right time and does not stop moving his feet even when he is being double shifted. With the puck he drives all lanes hard and confidently uses his body and puck protection skills to maneuver through high pressure. His edge work and balance are solid as he eludes and holds off defenders in the offensive zone while looking for options. Constantly creates opportunities by using his speed and agility, displaying excellent mobility moving from one spot to the next very quickly.”

The youngster called his skating and smarts the best parts of his game.

“The best part of my game is either my skating ability, I’m a dynamic skater with good agility and I’m a pretty fast player, and I have a pretty good hockey I.Q. so I can read the plays before they happen,” McConnell-Barker said.

Adding to his skill, McConnell-Barker’s 6-foot-1 frame is something to build on as well.

“The height is there and like of a lot of these guys, he’s going to continue to build on strength. The weight is going to come,” Raftis said. “When you see his speed already, if he can continue to gain strength and add to that, it can give him another gear, which can make him even more of a special player.”

McConnell-Barker is looking to improve on his game as well prior to his first training camp.

“I’m trying to get a better shot,” McConnell-Barker said. “A lethal shot is key. My skating is really good but it can always get better and more explosive so I’m working out my legs a decent amount and I feel like once I get back on the ice, I’m going to be that much more explosive and that much better. Overall, you can always work on all parts of your game but shot for me is the key one.”

McConnell-Barker is looking forward to being part of what stands to be a veteran Greyhounds roster next season.

“They can teach me how to grow as a hockey player and mature as a player,” McConnell-Barker said. “It’s going to be a great experience. The older guys will be there to help me learn and when it’s my turn to be the older guy, I can do that for the younger guys.”

On Friday, the Greyhounds signed McConnell-Barker and the young forward is excited to join the team.

“Getting drafted was great enough but signing and being officially with the organization is a pretty good feeling,” McConnell-Barker said. “I’m pretty pumped. I’ve heard a lot of good things about the Sault. The fan base is great. The community is awesome and I’m there to help out and do what I can for the community and the fans.”

Looking back on the draft, McConnell-Barker said when he got the call from about joining the team, he responded with, “I’d love to play for the Greyhounds.”

“I got a call from Kyle when the third pick was being made asking me if I’d like to be part of the Soo Greyhounds and I responded ‘I’d love to play for the Greyhounds,’” McConnell-Barker said. “My whole family was in the room and they all started screaming because it’s not up on the board yet, but they know I’m going to get picked there. Hearing that, all of the nerves went away. I was just really pumped. It was a special day.”

McConnell-Barker added how special it was sharing the moment with his family, including his two brothers and parents along with his grandparents on facetime.

“They’ve all helped me along the way to get to where I am,” McConnell-Barker said. “It meant a lot to have them there to enjoy the moment with them.”