Lots to learn from in 2019-20 for Greyhounds defencemen

Teaching the Greyhounds style to a 'relatively new group' of defencemen, coach John Dean hopes the OHL season provides some takeaways heading into next season
May 9, 2020 1:30 PM By: Brad Coccimiglio 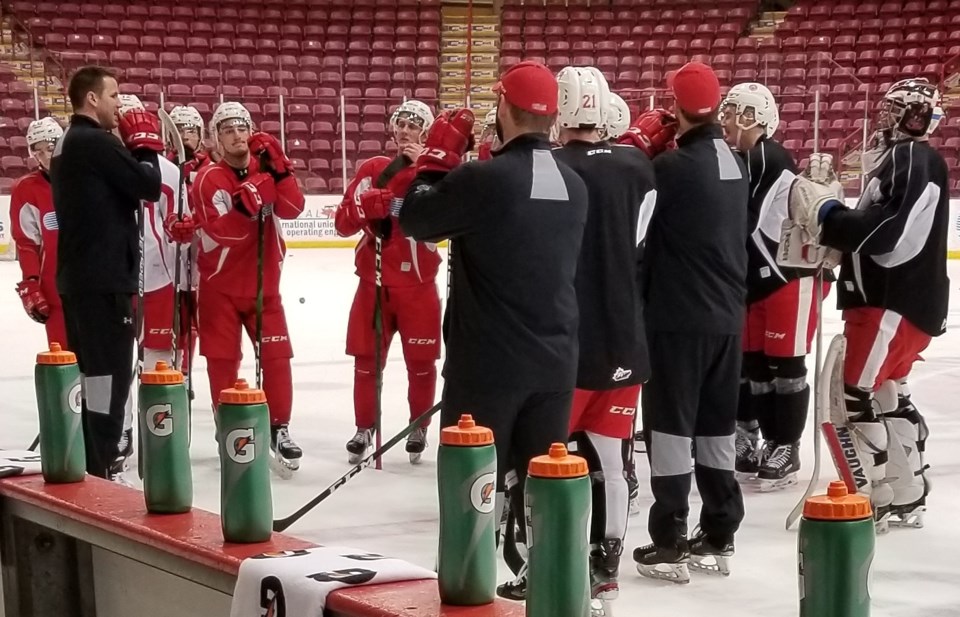 Chalk the season up to one of learning.

When it comes to the group of defencemen on the Soo Greyhounds roster during the 2019-20 Ontario Hockey League season, it was a year that coach John Dean hopes will allow them to understand what it takes for the team system to be successful.

“We teach our style of play, which is a lot about decision-making,” Dean said. “We really give them a lot of flexibility. We’re not a team where there’s only one way to do things. When you give a team that much flexibility and room, there’s a lot of room for error and there’s a lot of room to learn. That group as a whole, they’ve got a really good path moving forward.”

After graduating Mac Hollowell and Jordan Sambrook last summer, the Greyhounds blueline featured a relatively inexperienced group that got a little younger with the trade of veteran Holden Wale prior to the OHL’s trade deadline in January

“We’re so interesting back there,” Dean said. “What is the formula that’s going to make this team win games on a consistent basis? When you’re trying to teach a relatively new group, there’s a lot of talk about the Greyhounds style of play and puck possession but we still have to put stock into when and when not to make those decisions. How often should we make these styles of plays? That was a learning process for these guys this season. When we were on, we were a special group back there.

“It starts with Jacob LeGuerrier. He’s been around for a long time with this style of play,” Dean added. “He’s a guy who didn’t get a lot of special teams on the power play and his five-on-five points (were solid). That’s from him being really solid in his decision-making, when and when not to jump into the rush five-on-five. When to make the safe play. When to make the creative play. He’s the guy that we want to follow.”

LeGuerrier, who finished the season with six goals and 31 points in 61 games, was a player Dean used against the top players around the league on a regular basis.

“Jacob plays against other teams best players every single night,” Dean said. “He led our defencemen in points five-on-five. When you put those two things together, to watch a kid go against other teams’ best players and also put up the most points five-on-five, we didn’t give him a lot of opportunity on special teams so credit to him to take advantage of the ice time.”

In talking about learning how to be successful in the Greyhounds style, Dean referenced a pair of smooth-skating blueliners in figuring out how to proceed.

“What a season Rob Calisti had,” Dean said. “Especially considering his limited opportunity last year. Good for him for making me look not-so-smart the year before. He really learned his formula over the course of the year. What he can do and when he should be doing it. Over the course of the season, the way he competed away from the puck, he can walk into our office next year and say, ‘I know exactly how I need to play to be successful and I’m going to try to do it as consistently as possible.’”

“Billy Constantinou is the same thing,” Dean added. “With the puck, he’s exceptional. Credit to Jordan Smith with this entire group. He spent a lot of time on each individual player. Billy can also come back and say ‘I know exactly what’s expected. I know what formula works. I know what’s too much and what’s too little.’”

“To come in after not getting a lot of opportunity (in 2018-19) is pretty impressive, especially mentally,” Dean said.

Dean also credited Constantinou’s game after being acquired by the team from the Kingston Frontenacs.

“He has a skill set with the puck that you just can’t teach,” Dean said. “He does things I wish I could teach to everybody. They come by him naturally. His patience and poise with the puck is pretty incredible and his production was big for us, both five-on-five and on the power play. I’m looking forward to him taking another step on the other side of the puck but continuing to be really dominant with the puck on his stick.”

Eligible for the 2020 NHL draft, Ryan O’Rourke drew the attention of a lot of scouts during the season.

“We named a 17-year-old our captain, which speaks to the testament of his character,” Dean said. “A big thing for me this year with Ryan was when our team faced so much adversity over that tough streak (in the first half), we consistently looked at each other as a staff and asked, ‘Who got it last night?’ It was always Ryan O’Rourke. Whether it was a big goal or physicality or sticking up for his teammates. That’s tough to find these days is such a well-rounded player. I hear a lot of scouts coming up to me and say he just doesn’t make a lot of mistakes. That’s the best way to describe Ryan. He’s consistent. He doesn’t make a lot of mistakes and a real underrated offensive player as well. He’s got a heavy shot. He worked our power play. He’s an interesting guy. He does everything really well.”

“(Early in the season) we challenged him to control his emotions and play on the edge but don’t go over it,” Dean added. “He did a really good job of that, especially in the second half of the year, making sure he curtailed his emotions and use them to his benefit as opposed to the teams detriment. That’s a testament to his character and what he’s capable of.”

Giving the team some depth, Drew Wawrow filled in a number of different roles for the Greyhounds during the season and moved up and down the depth chart as the season rolled on.

“Drew has a skill set where he’s capable to move up and down the group of D,” Dean said. “He can play the power play if you need him to. He has very underrated hockey intelligence. He sees the play in front of him very well. The big thing for Drew is that he asserts himself every night. He’s in a tough spot because he has a skill set where he sees a lot of things that other guys don’t see, but we also want him to make the quick, simple play and move the puck up ice. Sometimes he gets caught in between. For him to be really successful is he needs to assert himself into exactly who he is every night. His ability to go up and down the lineup and eat big minutes and play the PK and power play when we need him to, having a guy like that is an asset.”

The Greyhounds first round pick in the 2019 OHL Priority Selection, Holmes “is a good example of a first-year defenceman who really started to gain confidence after the Under-17 tournament and getting a feel just for what the Ontario Hockey League is like.”

Dean spoke of defence being a tough adjustment for rookie players in the league.

“At the beginning of the year, like most young guys, he was starting to figure out just how hard it is at this level and how tough you have to compete and be in that mental state for a consistent 60 minutes and in practice,” Dean said. “As the year went on, you could start to see that edge to his game. He was competing really hard away from the puck. With the puck, you can’t teach what he has. He has very high confidence in himself to make the play under stressful situations, which is what everyone is looking for these days.

“His play without the puck, he realizes now exactly what it takes and just how hard you have to compete to take ice away from some of the special players in our league,” Dean added. “As the year went on, we started testing him more in different situations and that’s a testament to his development over the year.”

Halushak found himself earning more ice time in the second half of the season following the trade of Wale to Kitchener.

“Matty did a good job of starting to force our hand in the second half and a few times we were forced to go eleven (forwards) and seven (defencemen) to make sure that Shak got some minutes because he was starting to have an impact on the game,” Dean said. “What he brings is a nice look for us. He’s a big, strong kid with a good, long stick. He still needs to learn how to use some of the assets he has but credit to him. This is a guy that comes to work every day and puts the boots on. He doesn’t know if he’s going to play on any given night, but I really thought he took a good step in the second half of the season. He’s got an underrated hockey I.Q. He’s very good at making the first pass and can slip a puck to guys on exits and jump up into the rush. With more ice time and more opportunity, you’re going to see a more confident player. I like what he brings. He brings some physicality and some toughness. I do think his potential to make good plays with the puck is often overlooked.”

For Holmes and Halushak, much like their partners on the Greyhounds blueline, the 2019-20 season was one that turned into a major learning experience.