Looking ahead as the OHL season opens up

The Ontario Hockey League regular season is upon us and we take a team-by-team look at the Eastern Conference
0
Sep 19, 2019 6:00 PM By: Brad Coccimiglio 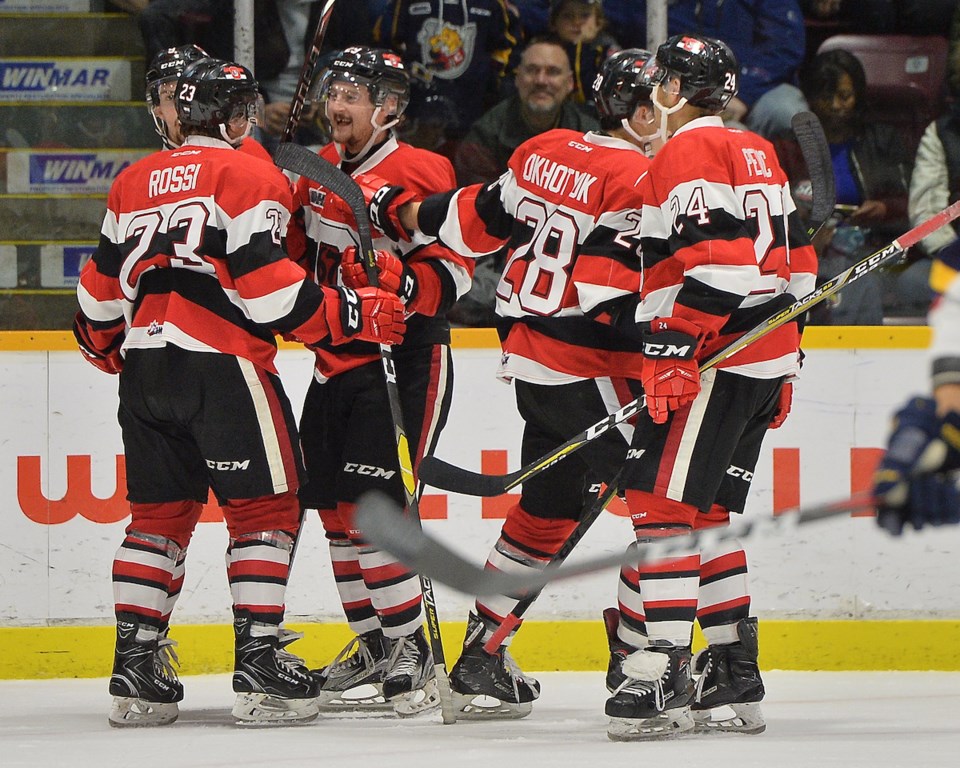 With 43 preseason games in the books, the games get a little more meaningful tonight as the 2019-20 Ontario Hockey League regular season opens with the Niagara IceDogs hosting the Sudbury Wolves.

The new season brings with it some interesting storylines across the league, as it does every year.

In the first of a two-part series, we take a look at the OHL’s Eastern Conference and some of the players and storylines to look out for in the conference.

Teams are listed by division in alphabetical order.

On Friday, we’ll take a look at the Western Conference.

Barrie Colts: The Colts enter the season with questions surrounding their goaltending but look to be solid on the blueline and offensively-gifted on the top two lines with Carolina Hurricanes prospect Ryan Suzuki and Buffalo Sabres Matej Pekar leading the way.

Goaltender Jet Greaves was solid in the preseason and will look to carry that over as he shares the goaltending duties with import Arturs Silovs. If the duo comes through in the regular season, the Colts could be tough in the Eastern Conference.

Rookie defenceman Brandt Clarke was outstanding in the preseason with 10 points, including a hat trick.

Mississauga Steelheads: Much like their counterparts around the division, Mississauga’s goaltending is going to be the key question mark, particularly the lack of experience.

The team is set to begin the season with Kai Edmonds, acquired from the Barrie Colts, and holdover Joe Ranger in goal.

After dealing Ryan McLeod and Owen Tippett ahead of the trade deadline last season, the Steelheads had some quality young players to work with and the group should take a step forward in development this season.

Dallas Stars prospect Thomas Harley had a big season on the Steelheads blueline last year with 11 goals and 58 points in 68 games.

Niagara IceDogs: After loading up in hopes of an OHL title last season, the IceDogs roster will have a new look this season as the team rebuilds.

Los Angeles Kings prospect Akil Thomas and Nashville Predators prospect Philip Tomasino head the offensive attack though Thomas could be on the trade market as a 19-year-old.

Thomas is coming off a 38-goal, 100-point season last year and will draw plenty of interest from contending teams.

Overage Elijah Roberts and 19-year-old Mason Howard lead a young and relatively inexperienced group of defencemen on the Niagara roster.

North Bay Battalion: Like many of the teams in the division, the Battalion start the season with questions in goal.

After dealing overage goaltender Christian Propp to the Soo Greyhounds, the team proceeded to send 19-year-old Christian Purboo to the Sudbury Wolves.

North Bay will start the year with Joe Vrbetic and Christian Cicigoi between the pipes. The pair have a combined one game of OHL experience as Vrbetic got a start with the team last season.

Sudbury Wolves: The eyes of many scouts will be on Wolves forward Quinton Byfield this season.

After losing Buffalo Sabres prospect Ukko-Pekka Luukkonen to graduation, Christian Purboo was acquired from North Bay to take over between the pipes in Sudbury.

Purboo, 19, saw action in 23 games last season for the Battalion.

Hamilton Bulldogs: Coming off a 51-goal season in 2018-19, Arthur Kaliyev will see game-by-game dose of top defencemen and assignments against tough line matchups this season as he continues to be the offensive leader for the Bulldogs.

Zachary Roy posted 20 wins in 44 games last season in goal for the Bulldogs and will look to improve on a goals against average of 3.58 and a save percentage of 0.884 last season.

The coaching staff has a bit of a new look this season as Vince Laise takes over as head coach from David Matsos. Matsos is still on the staff as he serves as an associate coach.

Kingston Frontenacs: Much of the focus in Kingston this season will be on rookie forward Shane Wright, and for good reason.

Wright, born in 2004, is entering the league a year early after being granted exceptional status and being declared eligible for the OHL draft in the spring.

Wright is joining a Frontenacs team that won just 14 games last season and looks to be in a position to struggle again this season.

Oshawa Generals: The Generals enter the season with some key holdovers from a team that finished third in the Eastern Conference last season.

Overage forward Brett Neumann is coming off a career year that saw him score 45 goals, including 20 in 29 games after being acquired from Kingston.

The team also has high hopes for young defenceman Lleyton Moore, who was acquired by the team in a deal with Niagara last season but missed a major chunk of time after the deal but had three assists in six gamers with the Generals and did play in 15 playoff games with the club.

Ottawa 67’s: After making it to the OHL final last year, the 67’s stand to be a title contender again this season.

Losing some veterans up front, the Ottawa offence remains a strong point with the likes of overage forward Austen Keating and NHL draft eligible import Marco Rossi set to lead the way.

The team is also very experienced on the blueline with six defencemen returning, including overage Noel Hoefenmayer, Arizona Coyotes prospect Kevin Bahl, and New Jersey Devils prospect Nikita Okhotyuk. Sault Ste. Marie’s Jack Matier joins the group as a rookie after being selected by the team in the first round of the OHL draft in April.

Peterborough Petes: With Toronto Maple Leafs prospect Nick Robertson in the mix in addition to Arizona Coyotes prospect Liam Kirk and San Jose Sharks prospect Zach Gallant, the Petes will look to get added scoring from the likes of Michael Little and Semyon Der-Arguchintsev this season.

The Petes stand to be in good shape in goal with Minnesota Wild prospect Hunter Jones leading the way. Set to turn 19 this weekend, Jones won 28 games last season and played in 57 games.

Nerves, excitement for locals on eve of OHL draft
Apr 3, 2020 10:44 PM
Comments
We welcome your feedback and encourage you to share your thoughts on this story. We ask that you be respectful of others and their points of view, refrain from personal attacks and stay on topic. To learn about our commenting policies and how we moderate, please read our Community Guidelines.