Junior hockey isn't just about the results on the ice

Denny Lambert is looking forward to getting back behind the bench for a number of reasons
Jun 8, 2020 9:00 AM By: Brad Coccimiglio 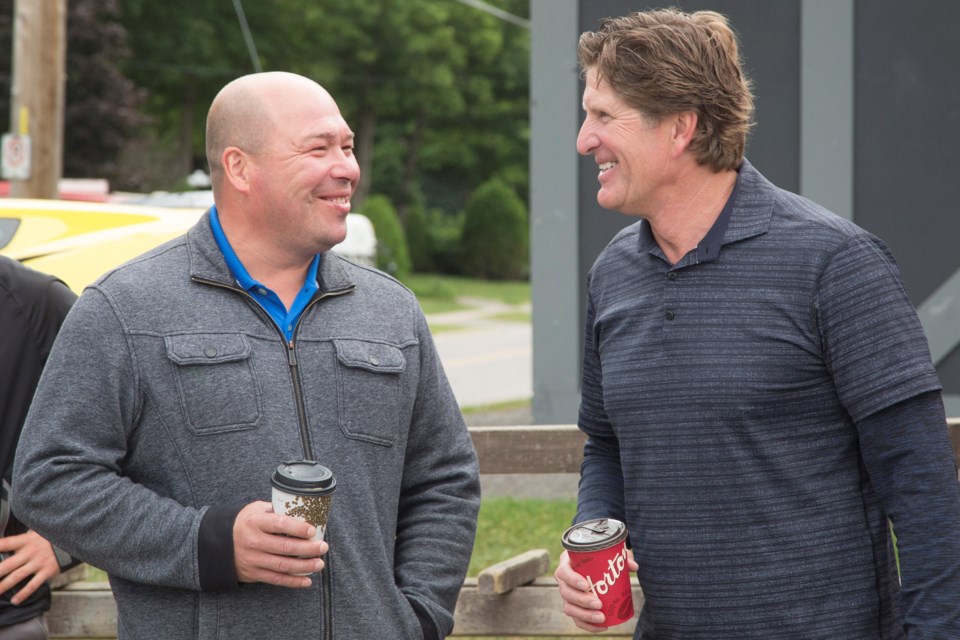 Coaching junior hockey is something Denny Lambert has always enjoyed.

And when it comes to running a bench at the junior level, there’s more that goes into it than just the X’s and O’s.

“I think it’s that fact that these guys are 16 to 20 years old and on the verge of going on to the higher levels,” Lambert said. “And they’re just looking for that guidance; somebody that has experienced that to help them get to that next step. That’s what the appeal is. They’re at that age where it’s really critical for the next stages of life and what they want to do, not only on the ice but as men. They’re going through interesting stages at (this age) in becoming men and it’s nice to be a part of it.”

“It’s not just the hockey part of it,” Lambert added. “Even if they don’t succeed in hockey, it’s have they reached their goals outside of hockey too. A lot of guys from when I first started coaching, most of them are married with kids and it’s really interesting to see them as parents now.”

The coaching staff is one that includes different experiences both on and off the ice.

With a staff that includes the pro hockey experience of Lambert, associate coach Jeremy Stevenson, as well as Gary Roach, who Lambert said Sunday is also joining the coaching staff.

The staff also included assistant coaches Micky Sartoretto, who played with the Thunderbirds before moving on to the Ontario Hockey League with the Kitchener Rangers and Saginaw Spirit, and Aidan Wright, who played college hockey at Lake Superior State for four seasons.

“That’s what excites me about this level,” Lambert said. “Everyone on this staff can relate to what these kids are going through because every single one of us played there.”

What style can fans expect from the Thunderbirds under the guidance of the new staff?

As the sport has evolved into puck possession, Lambert said the team will also expect players to be responsible away from it as well.

“There still has to be a part of the game where you can’t turn over the puck or you have to get back into good defensive position because, come playoff time, I find that if you’re not able to play both styles, there are some games that can get very tough,” Lambert said. “If your scoring dries up for two or three games, that could be the difference in a series. In those low-scoring games, you have to get through with your defence and playing a tight defensive game.”

In his time as a coach, Lambert has learned a lot, but he said the biggest thing he’s learned is how to mix the fun and professionalism at a high level.

“Professional meaning on the ice and off,” Lambert said. “I want to have as much fun as we can. Fun and professional because we need to know when to turn the fun off and when to work. You want to come in light-hearted but at the same time you know what it’s going to take and you have to know that it’s your work commitment to the team and that’s being a professional every day.”

“In the next level of live, whether you turn pro, NCAA or OHL, that’s what they’re going to be expecting from you anyway so you might as well learn those habits now,” Lambert added.

“It’s a great opportunity for me to get back into it,” Lambert said. “Part of the reason I left coaching was that I didn’t want to leave Sault Ste. Marie.

“This opportunity popped up and it was something that I absolutely wanted to do and gives me a good chance to coach at a high level and stay at home and get back into the game that I love,” Lambert added.

The position opened up when the Thunderbirds announced in mid-May that John Parco, who had been with the team for three seasons, wouldn’t be returning, a decision the team said was a mutual one.