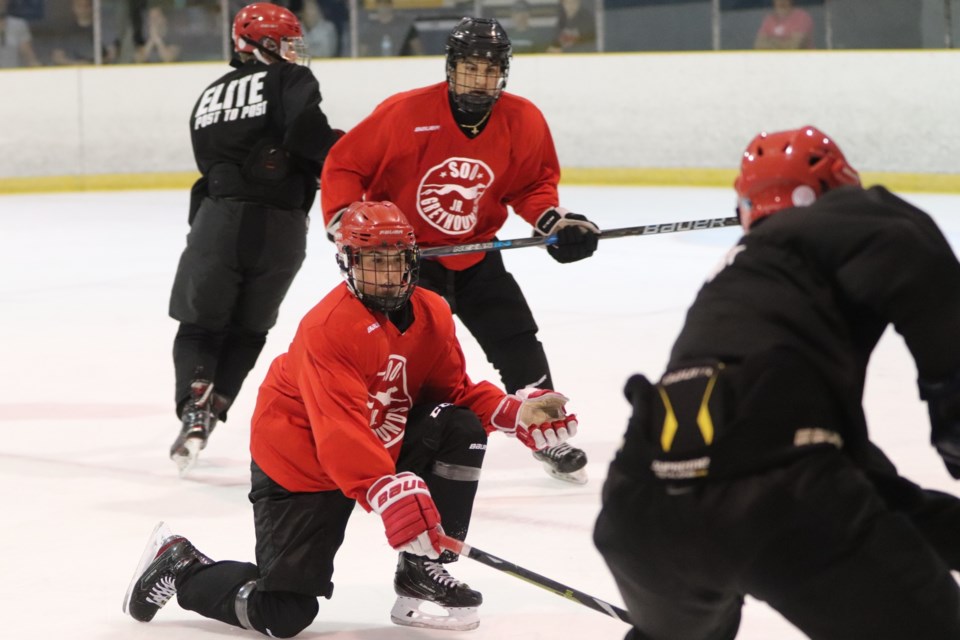 Sault Ste. Marie’s U18 AAA team has been on the ice for a stretch in the fall, but things are about to get a little more meaningful for the Soo Jr. Greyhounds.

The team found out this weekend that the Great North U18 AAA league, formerly known as the Great North Midget League, has received approval to take part in modified game action.

The league has gone to a cohort model that will see the Jr. Greyhounds face the Sudbury Nickel Capital Wolves while the other six markets will also pair up to start play.

Games will be held in each market and expected to begin in early December.

The return required approval for the teams to play in markets that have different local health units as well.

“There are factors right now that made it tough to social distance in terms of the dressing rooms and the benches,” Jr. Greyhounds coach Jamie Henderson said Saturday afternoon. “They looked at this as an opportunity to get the kids back playing hockey. It’s certainly not going to look like what we’re used to seeing, but it certainly beats what happened in March when we had to stop play. It’s a step in the right direction.”

Henderson said the team will be comprised of 22 players to start and teams will be split into two groups of 11 players each for games, which will be shorter than the traditional 60-minute contests and will be played 5-on-5.

“That’s important,” Henderson said. “That’s definitely one of the pluses to the plan that we are able to play five-on-five.

“I’ve watched some of the CCHL stuff and when you start watching it, it doesn’t look that different than regular hockey,” Henderson added. “If anything, the coaches there have told me that the game is maybe even a little bit faster without the body checking. We’re just happy to be out there being able to practice and play some games and at least compete.”

The plan is to run the current model until around Christmas and see how things progress before making a decision on whether to open things up further.

The return brings an added level of excitement for the team, who began practicing in September.

“It’s 2020 so you have to be ready for anything and it’s all about your attitude,” Henderson said. “It’s easy to feel sorry for yourself or to get down and say, ‘They’re doing this there’ or ‘They’re playing hockey here and there.’ At the end of the day, we’re fortunate where we live that it’s a little bit safer. The important thing is that the kids can get back to play.”

“We were excited to get back on the ice in September just to be able to practice and go through skill sessions,” Henderson added. “The kids have been super excited. We played an inter-squad game amongst our bubble. The kids were excited to play. They were prepared like it was a normal game. Afterwards, they were excited that they had a chance to play.”

Henderson also spoke of the mental aspect of being able to be around the rink regularly for the players.

“For these kids, it’s a chance to get back to feeling a little bit normal and that’s what’s most important, especially with mental health being so important,” Henderson said. “There are so many other things that the kids can get distracted by. Being at the rink four times a week right now is a great opportunity for them.”

With assist from Ron Francis, Bayview rink proposal gets forwarded to budget talks
May 10, 2021 10:00 PM