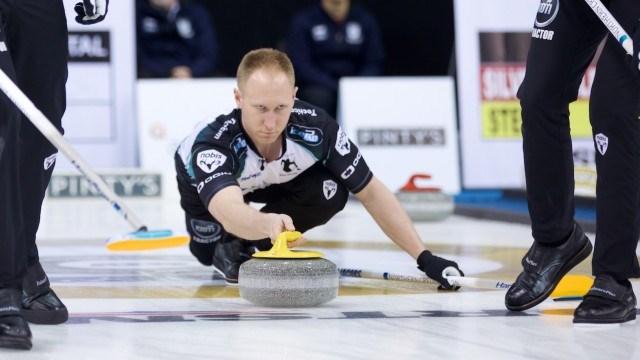 Next up is the playoff round for Brad Jacobs at the latest Grand Slam of Curling event.

Competing in the Players’ Championship this week in Toronto, the Jacobs rink, which includes third Ryan Fry, second E.J. Harnden, and lead Ryan Harnden, wrapped up round robin action at the six-day event on Friday.

Jacobs concluded the round robin with a 7-6 loss to Switzerland’s Peter De Cruz and will take a 4-1 record into the playoff round, which opens on Saturday.

The tournament features 12 men’s and 12 women’s teams that are split into six-team pools with the top eight teams advancing to the playoffs.

The remainder of the playoff field on the men’s side will be determined following the outcome of three games in the evening draw on Friday.

De Cruz remains on the bubble after finishing the round robin with a 2-3 record, as does Toronto’s John Epping, also 2-3.

Pending the evening results, a tiebreaker on Saturday morning could come into play to help determine the final playoff participants.

Quarterfinal action on the men’s side is set for 4 p.m. Saturday with the semifinals at 8 p.m.

Jacobs opens Players' Championship with victory
Apr 10, 2019 8:00 AM
Comments
We welcome your feedback and encourage you to share your thoughts. We ask that you be respectful of others and their points of view, refrain from personal attacks and stay on topic. To learn about our commenting policies and how we moderate, please read our Community Guidelines.