Jacobs picked up wins over John Epping and Brad Gushue on Thursday
Apr 12, 2019 8:00 AM By: Brad Coccimiglio 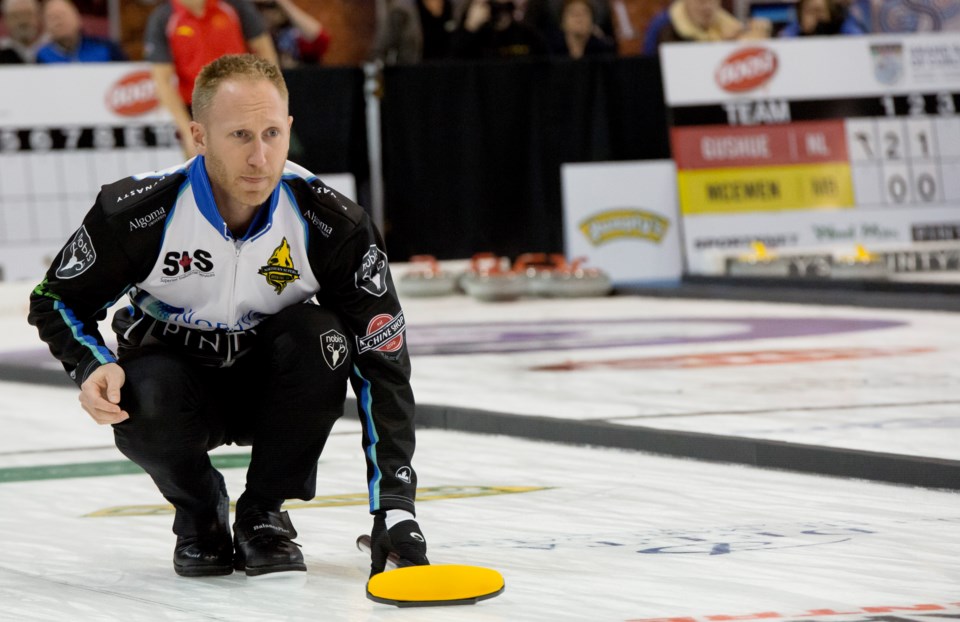 Brad Jacobs is assured of a playoff spot at the latest Grand Slam of Curling event, the Players’ Championship.

The Jacobs rink, which includes third Ryan Fry, second E.J. Harnden, and lead Ryan Harnden, picked up a pair of victories on Thursday to improve to 4-0 heading into their final round robin game on Friday.

Jacobs picked up an 8-6 win over Brad Gushue of St. John’s, Nfld. to wrap up action on Thursday.

Jacobs fell behind through four ends after Gushue scored a pair in the fourth to take a 3-2 lead.

Looking at a draw for two in the fifth end, Jacobs attempted a runback and caught a break as the raised rock redirected off another Jacobs rock to remove the Gushue stone in play and give the Jacobs rink the four they were looking for.

“That shot was lined up kind of nicely,” Jacobs the TheGrandSlamOfCurling.com. “It suited everyone’s eye, I think, and that spot in the ice with my out-turn is a comfortable spot. Once again, we got a little lucky, but you’ve got to take those opportunities on when they’re presented to you. We did, we got fortunate.”

Gushue tied the game with three of his own in the seventh but Jacobs sealed the win with a pair in eight with the hammer.

In the morning draw, Jacobs picked up a 6-0 win over John Epping of Toronto in four ends.

After blanking the first two ends with the hammer, Jacobs scored three in the third end and stole three more in the fourth end for the win.

Jacobs wraps up the round robin in draw 11 against Switzerland’s Peter De Cruz at noon.

Playoff action begins on Saturday with semifinal action set for Saturday night and the championship on both the men’s and women’s sides set for Sunday.

VIDEO: Top female high school athletes honoured
Jun 25, 2020 9:32 PM
Comments
We welcome your feedback and encourage you to share your thoughts. We ask that you be respectful of others and their points of view, refrain from personal attacks and stay on topic. To learn about our commenting policies and how we moderate, please read our Community Guidelines.