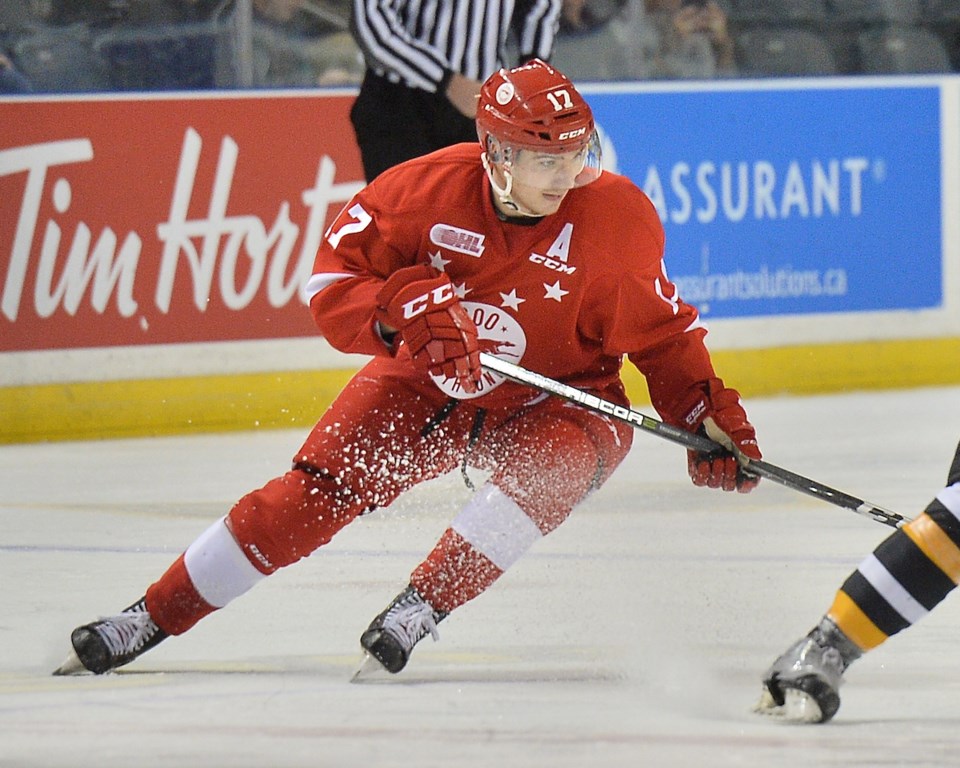 What is potentially the hottest stretch of his Ontario Hockey League career, Keeghan Howdeshell continued to roll along on Sunday.

The overage forward scored three times on Sunday afternoon, including a shorthanded goal marker in the final minute of the second period, as the Soo Greyhounds skated to a 5-3 Ontario Hockey League win over the Flint Firebirds at the Dort Federal Event Center in Flint.

“(Jacob) LeGuerrier made a huge pass to (Morgan) Frost and Frost did his thing and put the puck in a spot for me and I went in, backhanded it and it went in,” Howdeshell said.

“It definitely was a momentum change,” Howdeshell said of the goal.

“Shorthanded goals can really pick your bench up and deflate the other bench,” said Greyhounds Coach John Dean. “It was such a pretty goal too. He put the team on his back again. When he’s got the puck, he’s pretty hard to stop.”

“Back-to-back hattricks is a pretty impressive feat,” Dean said. “He’s also a kid that, when challenged and pushed to be his best, rises to the occasion.”

Dean added that Howdeshell is well-liked by the coaching staff as well.

“You can talk to him peer-to-peer,” Dean said. “He responds extremely well to coaching and he’s also not shy to come in and talk to the staff.”

Dean called the overage forward “the pulse of the team.”

“He’s a fun guy to be around,” Dean added. “He enjoys life and he loves playing the game.”

Frost called Howdeshell “one of the most underrated guys in the league.”

Frost chipped in with a goal and two assists for the Greyhounds, giving him seven points in his last two games.

Alex Johnston had the other goal for the Greyhounds, giving the rookie forward goals in back-to-back games.

Ty Dellandrea had a goal and an assist for Flint. Evan Vierling assisted on three goals.

The Firebirds played the game with 16 skaters due to injuries and lost Jack Phibbs Sunday due to injury as well.

“You can see that the fatigue really set in,” Flint Coach Eric Wellwood told the Firebirds television broadcast.

The team was already without veterans Connor Roberts, Dennis Busby, and Marcus Gretz due to injury prior to losing Phibbs in Sunday’s game.

“It’s adversity,” Wellwood said about Flint’s injury situation. “It’s something you’re going to learn and grow from. We might have to change our style and try to contain a little more instead of being aggressive (offensively).”

Greyhounds captain Barrett Hayton missed Sunday’s contest due to injury. The veteran forward was injured during the Greyhounds morning skate on Saturday and remains day-to-day.

Dean didn’t rule out the possibility of Hayton playing on Wednesday when the Greyhounds open up a three-game homestand that begins with a return meeting against the Firebirds.

In other action around the OHL on Sunday, in Guelph, Cam Hillis had two goals and an assist as the Guelph Storm beat the Kitchener Rangers 8-1. Barret Kirwin and Daniil Chayka added a goal and two assists each for the Storm. Ryan Merkley assisted on three Storm goals. Sault product Keegan Stevenson also scored a pair of goals.

In Hamilton, Kirill Maksimov scored a pair of goals as the Niagara IceDogs beat the Hamilton Bulldogs 5-1. Ivan Lodnia and Jason Robertson chipped in with a goal and an assist each for Niagara.

In London, three unanswered goals in the third period helped the London Knights to a 6-3 win over the Sarnia Sting. Adam Boqvist and Josh Nelson had a goal and an assist each for London while Matvey Guskov assisted on a pair of goals. Franco Sproviero scored a pair of goals for Sarnia.

In Ottawa, Tye Felhaber scored three times as the Ottawa 67’s beat the North Bay Battalion 6-3. Mitchell Hoelscher chipped in with a goal and two assists for Ottawa. After blowing a 3-0 lead, the 67’s scored three times in the third period for the win.

In Sudbury, Blake Murray had two goals and an assist as the Sudbury Wolves blanked the Mississauga Steelheads 7-0. David Levin and Quinton Byfield chipped in with a goal and two assists each. Ukko-Pekka Luukkonen stopped 28 shots for the shutout.