Howdeshell comes through for Greyhounds, again

It wasn't easy and it might not have been pretty at times but the Soo Greyhounds came out of Sarnia with a win on Thursday night
0
Jan 3, 2019 10:56 PM By: Brad Coccimiglio 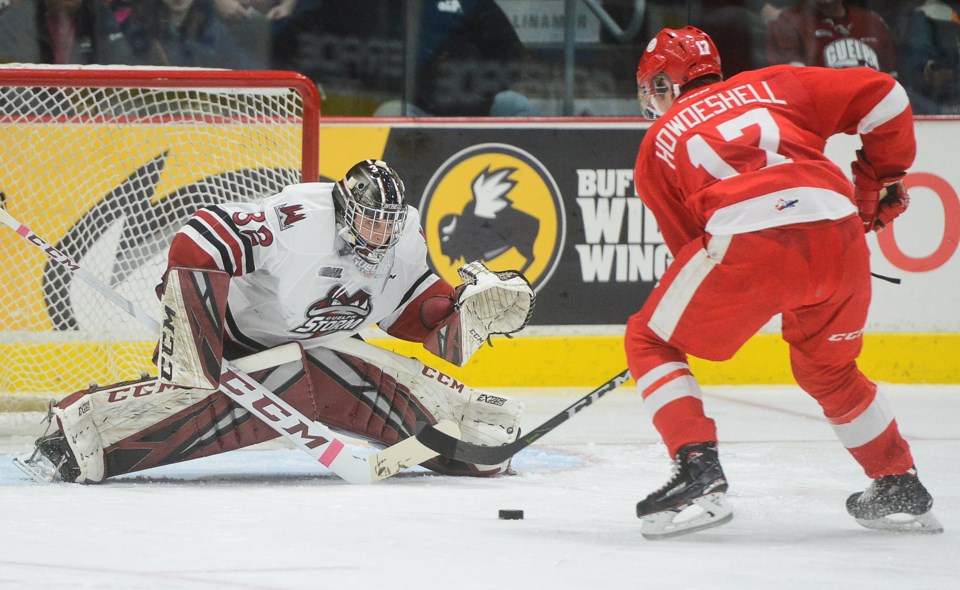 In the midst of a battle for top spot divisionally, the Greyhounds scored twice in the final eight minutes of regulation time before Keeghan Howdeshell scored just under three minutes into overtime to beat the Sarnia Sting 5-4 at Progressive Auto Sales Arena in Sarnia on Thursday night.

“We have some pretty good swagger in that room and the guys really believe in themselves,” Greyhounds Coach John Dean said. “Down two in the third period, most teams would have shut it down right there but it’s pretty night.”

Tied at two through 40 minutes, Sarnia scored a pair of goals in the final period to take the lead, including a goal by defenceman Colton Kammerer to make it 4-2 with 8:17 to go in regulation time.

Roman Pucek would pull the Greyhounds to within one just 41 seconds after Kammerer’s goal.

Just over three minutes later, Joe Carroll would beat a Sarnia defenceman to the goal and slide the puck past Sting netminder Ethan Langevin to tie the game at four and force the extra frame and se the stage for Howdeshell’s game-winner.

The overage forward found himself in the left faceoff circle and beat Langevin glove side to give him 29 goals on the season and the Greyhounds the victory.

“It was a frustrating game for me,” Howdeshell said. “I couldn’t get any bounces and I hit some posts. I had a chance to put it on net and had my head down. I had a step (on the defenceman) I couldn’t beat him, but I had an angle on him.”

Goaltender Matthew Villalta made 27 saves for the Greyhounds.

The Sting made life difficult for the Greyhounds, especially in the first 40 minutes of the game. Dean said, “They play a different style of game which is difficult to adjust to.”

“They did a very good job of slowing us down in the neutral zone,” Dean also said. “They played a disciplined 1-3-1 and through the course of the game, we started to break through, which was good.”

Sambrook felt the Greyhounds using their speed is part of the key to breaking Sarnia’s ability to clog things up in the neutral zone.

“When we’re not moving, it’s easy for a passive neutral zone to break us down,” Sambrook said. “Using our speed and chipping pucks deep is the key to breaking that.”

Ryan McGregor and Hugo Leufvenius had a goal and an assist each for Sarnia.

Franco Sproviero and Sean Josling also had two-point nights with a pair of assists each for the Sting.

Curtis Egert had the other Sarnia goal while Langevin stopped 33 shots.

The Greyhounds will take a 23-9-4-1 record into London on Friday night against the Knights. The win moves the Greyhounds three points ahead of the Saginaw Spirit for top spot in the OHL’s West Division. Saginaw has eight wins and an overtime loss in its last nine games to climb back into the race atop the division.

Saginaw is off on Friday before returning to action on Saturday night at home against the Kitchener Rangers.

Sarnia falls to 18-16-3-2 and sits third in the West Division, 11 points behind the Greyhounds.

In other action around the league on Thursday, in St. Catharines, Nathan Dunkley scored at 4:20 of overtime to give the London Knights a 5-4 win over the Niagara IceDogs. Dunkley had a pair of goals for London. Niagara goaltender Stephen Dhillon made 43 saves.

In North Bay, Brad Chenier had two goals and an assist as the North Bay Battalion beat the Oshawa Generals 4-2. Christian Propp made 38 saves for the Battalion.

In Peterborough, Cole Carter had the shootout winner as the Mississauga Steelheads beat the Peterborough Petes 6-5. Alan Lyszczarczyk had two goals and two assists while Keean Washkurak also had a pair of goals for Mississauga.

In Windsor, Daniel D’Amico scored at 1:16 of overtime to give the Windsor Spitfires a 5-4 win over the Sudbury Wolves. Will Cuylle scored three times for Windsor.

In Barrie, Ryan Suzuki’s goal at 6:-2 of the third period was the game-winner as the Barrie Colts beat the Erie Otters 3-2. Suzuki finished the day with a goal and an assist. Barrie defenceman Tyler Tucker assisted on all three goals.

In other league news on Thursday, the Saginaw Spirit acquired forward Ryan McLeod from the Mississauga Steelheads in exchange for Duncan Penman, a third round pick in 2019 (originally London's), a second in 2020, a third in 2022, a third in 2024, and a conditional second in 2024.

The OHL trade deadline for overage players is Jan. 9 and Jan. 10 for all other players.

Sault College women's curling team wins silver
Feb 17, 2020 10:00 PM
Comments
We welcome your feedback and encourage you to share your thoughts on this story. We ask that you be respectful of others and their points of view, refrain from personal attacks and stay on topic. To learn about our commenting policies and how we moderate, please read our Community Guidelines.