The Ontario Hockey League's road warriors are off to a winning start. Playing their first of eight straight games away from home to open the regular season, the Soo Greyhounds spoiled the Kitchener Rangers' home opening party with a 3-2 victory.
Sep 22, 2006 11:50 PM By: Ken Hilderley 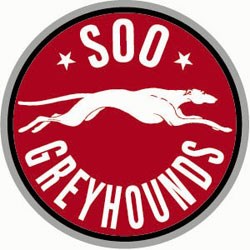 The Ontario Hockey League's road warriors are off to a winning start.

Playing their first of eight straight games away from home to open the regular season, the Soo Greyhounds spoiled the Kitchener Rangers' home opening party with a 3-2 victory.

Josh Godfrey notched the game winner with 6:52 remaining in the third period to break a 2-2 tie.

The two teams traded goals in each of the first two periods as Mike Duco opened the scoring on the power play for the Rangers before Brandon MacLean tied the score with a shorthanded marker.

In the second period, Matt Lyall put the Hounds ahead 2-1 with a power play goal while Duco's second of the game shorthanded evened the score once again.

The game's first star, Kyle Gajewski, was solid between the pipes for the Hounds and stopped 45 of 47 shots to take the victory. The Greyhounds fired 25 shots at Rangers goaltender Mark Packwood.

Godfrey and MacLean added assists for two point nights. Nick Spaling, who was also stopped by Gajewski on a penalty shot, had a pair of helpers for Kitchener.

The Greyhounds conclude their two game road trip on Saturday in Owen Sound against the Attack beginning at 7:30 p.m.

At Brampton, P.K. Subban's goal midway through the third period stood as the winner in a 5-3 Belleville Bulls win over the Battalion.

In Guelph, Jamie Arniel scored the winner to break a 3-3 tie and lift the Storm to a 4-3 win over Owen Sound.

At Kingston, Nathan Moon recorded a hat trick as the Frontenacs whipped the Ottawa 67's 10-5.

In London, Robbie Drummond scored a pair of goals as the Knights doubled up the Saginaw Spirit 6-3.

At Sudbury, the Mississauga IceDogs walked into the Sudbury Arena and smacked the Wolves 10-4. Former Greyhound Chris Lawrence scored three goals for the IceDogs.

In Toronto, Michael Haley's second period goal stood as the winner as the St. Michael's Majors edged the Oshawa Generals 4-3.

At Windsor, Josh Vatri's shorthanded goal was the winner in a 5-2 win for the Erie Otters over the Spitfires.

In Sarnia, Trevor Kell scored three times and Steven Stamkos twice in a 7-3 Sting win over the Plymouth Whalers.

In Barrie, Brian Little and Richard Clune scored two goals each to pace the Colts past Toronto 8-4.