Greyhounds look to learn from struggles

'When we were good, we were really good. That’s the benchmark for us moving forward' - Soo Greyhounds coach John Dean
Mar 29, 2020 9:00 AM By: Brad Coccimiglio 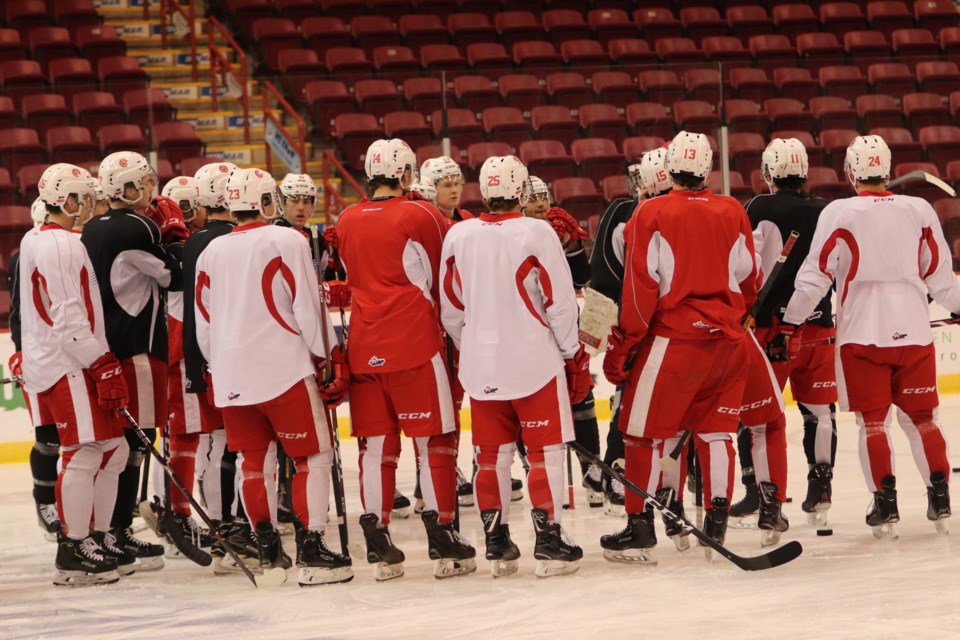 Chalk it up to a lesson learned.

That’s the hope for the Soo Greyhounds on the heels of the 2019-20 Ontario Hockey League season.

Jumping out of the gate with four straight wins before struggling in October and November, the Greyhounds would eventually end the shortened regular season out of the playoffs.

For second-year coach John Dean, the inconsistency of the season means the team has a lot to learn heading into next season.

“It was a roller coaster of a season,” Dean said. “Coming out with such a hot start, even though it was just four games, it set some expectations for people, including staff and players. We had a really tough stretch there that humbled us quite frankly. It made us realize how much we had to work on.”

“The positive part of the season moving forward was there were so many bright spots where we responded well to adversity and where we clearly showed that we were understanding the Soo Greyhounds style of play and just what this young group was capable of,” Dean said. “Roller coaster really means inconsistent. Unfortunately, that was still a trend into the second half of the season. When we were good, we were really good. That’s the benchmark for us moving forward.”

For Dean, who was hired by the team in July 2018 to take over for Drew Bannister, it wasn’t just a learning experience for the players.

Dean took over for Bannister after the latter was hired by the NHL’s St. Louis Blues to coach their American Hockey League farm team, the San Antonio Rampage.

Taking over a team that had gone to the OHL final the previous season, Dean led the Greyhounds to a 44-16-7-1 record last season, good for second in the OHL’s West Division.

This season, the Greyhounds finished the regular season with a 29-31-3-1 record.

“It was one of my tougher years coaching,” Dean said. “I talked to (Jordan Smith and Jamie Tardif) a couple of days ago and said, ‘We’re so much better for going through this together as a staff and going through some adversity.’”

“When you do have winning seasons, it’s important that you know how to deal with adversity and you don’t just have success because come playoff time, there are going to be those moments where the team that battled well through adversity will win,” Dean added. “That’s no different for a coaching staff.”

Dean would add that the struggles can be used as a building block going forward for the team.

“First and foremost, simplifying this for your players is critical,” Dean said. “And also, when things are tough, focusing on the positive with your players is critical. Those are two big things that I learned. It sounds cliché but when we went through tough times, we always got out of it when we put our nose to the grindstone as a staff and as a group and decided to just bear down and put 110 per cent in.”

With the opportunity to return 21 players for the 2020-21 season, Dean looks to the players to build on what they learned from the struggles of the 2019-20 season.

“One of the toughest parts about junior hockey is a lot of times, the lessons you learn, in the next year, the guys that have learned them have already moved on to their next level or their next opportunity,” Dean said. “With us, we were fortunate enough to go through it as a team this season and pretty much have everybody coming back with the exception of Bailey (Brkin) and Jaden (Peca).”

“That’s a big positive for our group,” Dean added. “We never want to get ahead of ourselves, but it’s exciting to see what these guys can do, and everyone saw what we can do when we’re focused and have attention to detail. It’s exciting when you go through a season like that and so many guys are coming back with the benefit of learning those lessons as opposed to turning over half of your team and having to teach a whole new group of guys.”

After seven consecutive playoff appearances, the 29 wins posted by the team was the fewest posted by the team since 2011-12. The two seasons have a pair of things in common as the Greyhounds also won 29 games that season, and it was the last time the team finished out of the playoffs.

“I don’t think the Soo Greyhound organization is used to saying this, but you have to learn how to win,” Dean said. “Winning is something that’s learned and becomes a habit. For a young team like we had, it’s so clear what the formula for winning was and what the formula for losing was.”

“By the end of the season, the guys knew exactly what a winning formula looked like and exactly what corners they couldn’t cut,” Dean added. “And moving into next year, we’d like to think that we’re ahead of the game. We have a map; we have a path for what it looks like for a Soo Greyhounds victory and how hard you have to work and the little things that you need to do. We learned our lesson on more than one occasion. They were lessons well learned.”