The team addressed some recent slow starts in an off-day meeting on Saturday
Nov 24, 2019 8:23 PM By: Brad Coccimiglio 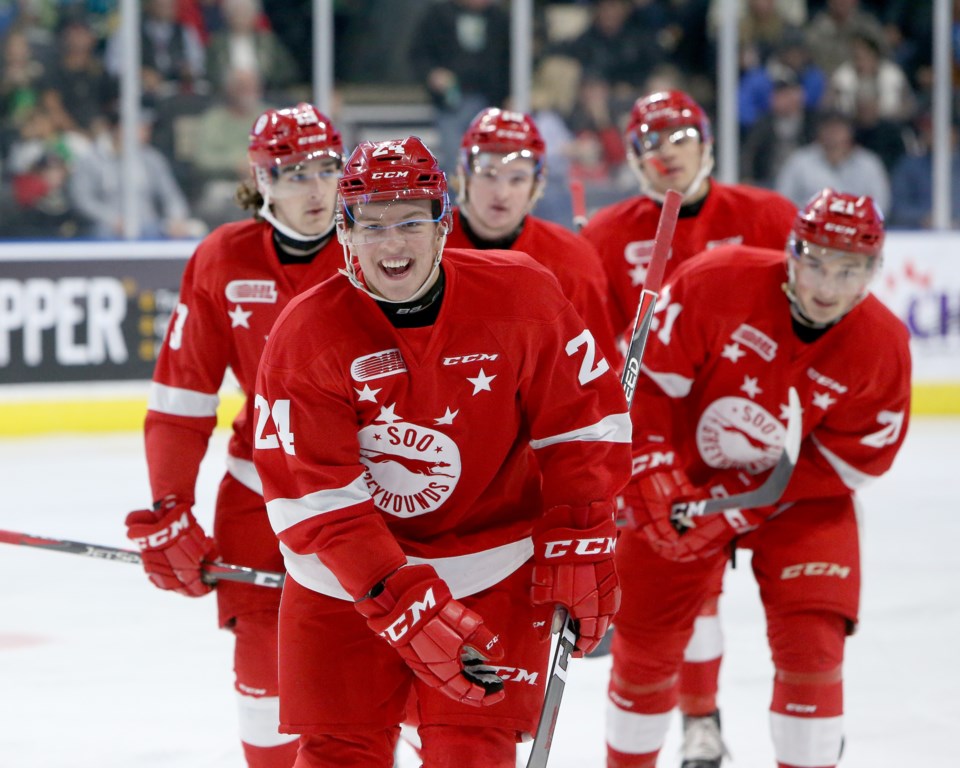 Starting well has been an issue at times for the Soo Greyhounds of late.

After a pair of tough starts led to losses in the opening two games of the Greyhounds three-game weekend road trip, a team meeting on Saturday and some changes to preparation led to a much better start on Sunday in the trip finale in Sarnia.

A 3-1 lead through 20 minutes helped the team to a 5-2 Ontario Hockey League win over the Sarnia Sting on Sunday at Progressive Auto Sales Arena in Sarnia and snapped a two-game losing skid in the process.

“We took pride today (in starting well) and (coach John Dean) let us have the ropes and we came out with a better start,” said Greyhounds overage forward Jaden Peca, who assisted on a pair of goals in the win.

“We had more of a team initiative that we were going to keep everyone accountable for what they were doing before the game and that everyone was focused,” Peca also said.

“We also addressed the intensity of our warmup,” Dean said. “You can’t just turn a switch on after warmups. You need to get dialed in a bit. You don’t need to go a million miles an hour but it’s important that you get your legs going.”

Veteran forward Cole MacKay, who paced the Greyhounds with two goals and an assist in the game, said the meeting “helped a bunch.”

“We knew that the starts in Windsor and Flint weren’t our greatest and that contributed to the losses,” MacKay said. “It was something we focused on. On a day off you really don’t meet like that as a team but we thought it was appropriate to.”

There was a lot to like from the first period for the Greyhounds.

“That’s a heck of a start that we had tonight,” Peca added. “We had four guys available at all times exiting our zone and made sure we weren’t turning pucks over at their blueline.”

The Greyhounds finished the night 2-for-7 on the power play, which included a key goal by Tye Kartye 1:50 into the game.

“We switched our power play units around a little bit and Tye goes out there, the run a set play and he puts the puck in the back of the net, and you could just see the confidence in the bench,” Dean said.

Peca said the game as a whole was one the team is pleased with overall.

“We had a couple of hiccups here and there (in the first two periods) but we got right back to our game and in the third period we lost our swagger a little bit but we got back to is toward the final 10 minutes,” Peca said.

Tanner Dickinson and Joe Carroll also scored for the Greyhounds while Billy Constantinou chipped in with a pair of assists as well.

Ryan McGregor and Jacob Perreault had a goal and an assist each for Sarnia.

The win improves the Greyhounds record to 10-14-1-0 as the team now has some time off before returning to game action. The team doesn’t play again until Nov. 30 at home. The team will host Sarnia in one of two games next weekend. Puck drop at the GFL Memorial Gardens is set for 7:07 p.m.

The team will then host the London Knights the following afternoon in a 2:07 p.m. start at the Gardens.

In other action around the OHL on Sunday, in Erie, Dylan Myskiw made 26 saves as the London Knights blanked the Erie Otters 4-0. Liam Foudy had a goal and an assist for the Knights while Ryan Merkley set up a pair of goals.

In Kingston, Shane Wright’s goal at 14:12 of the third period was the game winner as the Kingston Frontenacs beat the Mississauga Steelheads 3-2. Wright had a pair of goals for the Frontenacs. Christian Propp made 35 saves.

In North Bay, Luke Moncada’s goal at 10:23 of the third period held up as the game-winning goal as the North Bay Battalion beat the Niagara IceDogs 4-3.

In Oshawa, Zachary Paputsakis stopped 27 shots as the Oshawa Generals blanked the Sudbury Wolves 7-0. Danil Antropov, Ryan Gagnier, Kyle MacLean, and Lleyton Moore had a goal and an assist each for the Generals.

In Windsor, Jean-Luc Foudy scored at 3:56 of overtime to give the Windsor Spitfires a 4-3 win over the Owen Sound Attack. Connor Corcoran chipped in with a goal and an assist for the Spitfires.

Slow start burns Greyhounds in road loss
Nov 21, 2019 11:35 PM
Comments
We welcome your feedback and encourage you to share your thoughts. We ask that you be respectful of others and their points of view, refrain from personal attacks and stay on topic. To learn about our commenting policies and how we moderate, please read our Community Guidelines.