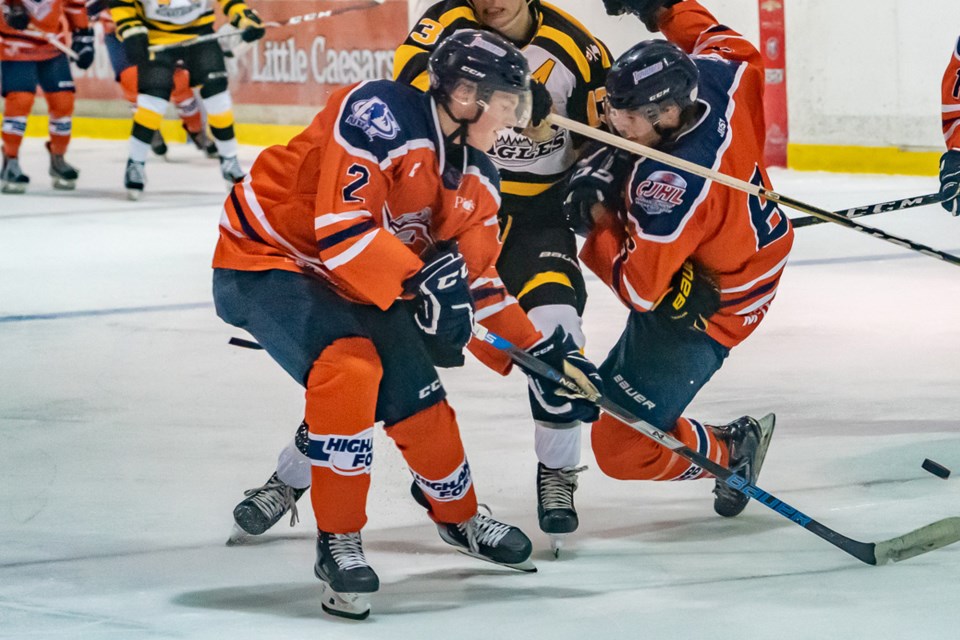 On the ice, sometimes it’s easy to forget that he’s still one of the youngest players out there.

Sault Ste. Marie, Mich. product Tyler Dunbar has turned a lot of heads early on in his young hockey career.

Currently in his first full season with the United States Hockey League’s Muskegon Lumberjacks, Dunbar has settled in nicely.

The 16-year-old joined the team midway through last season after starting the year in the Northern Ontario Junior Hockey League with the Soo Thunderbirds and stepped in well.

“It was definitely an adjustment coming from the NOJHL, but I think I handled it pretty well,” Dunbar said. “Things definitely started getting easier as the weeks progressed, and my confidence started to go up a little bit and that definitely made things easier.”

The young defenceman has earned the praises of his coach in his short time with the hockey club.

“He’s a phenomenal skater and he’s got an unbelievable shot,” said Muskegon coach Mike Hamilton. “Those are really the two things that have separated him and allowed him to have success early in this league. From our side, we see how well he skates and how well he can shoot. We’ve been trying to put him in those offensive positions. Areas of opportunity for him (to improve) are continuing to read the game a little bit better and developing on the defensive side of the game more. A lot of that is an ’03 (birth year) playing against men. Even last year compared to this year, he’s still young in this league. When you’re playing against 19 and 20 year olds and you’re going into the corner with a guy who is 200-plus pounds, you have to make sure you go at it with a plan of attack. That’s the area that he’s continuing to improve upon.

“He knows that to have success at the college and pro levels, those are the areas that he’s going to have to clean his game up in,” Hamilton added. “He put on a lot of weight this summer. He got a lot stronger and it’s really showed.”

While the speed of the league was “so much faster than anything I had played in,” Dunbar said he enjoyed the push of playing at a higher level.

Committed to play college hockey at North Dakota, Dunbar said speed is one thing he’s looking at improving ahead of joining the hockey program there in September 2022.

“Speed is going to be something that needs to improve along with edge work and just overall skating,” Dunbar said. “Every league you go up to, that improves and it’s something that I’m making sure to work on this year.”

Dunbar’s skating ability is what has allowed him to make the adjustment to playing in the USHL, long considered a breeding ground for potential college hockey players.

“It’s not an easy league to play in,” Hamilton said. “What I go back to that got him out of a lot of trouble (in games) is that he’s just a pure skater. When he did make a mistake, he had the ability to recover from it in most situations. That was really what helped him get through as such a young person.”

“We had a need on the blueline, and he came in and was getting big minutes from day one,” Hamilton added. “He took complete advantage of it. He was in our lineup pretty much every game and was logging almost 20 minutes a night.”

Hamilton went as far as calling Dunbar “one of our top defencemen” at such a young age.

When he rejoined the team this season, Hamilton said he noticed a difference in Dunbar’s strength from last season and, after a lengthy time away from game action due to COVID-19, his game is settling back in as well.

“He’s gotten a lot stronger,” Hamilton said. “His bottom-half is a lot thicker and for him, he’s a guy that comes in and knows the game. That’s the big thing is to be able to make those reads at high speeds.

Dunbar’s work ethic has also stood out for Hamilton.

“His work ethic is unbelievable. He’s a guy that, I’m usually the last guy to leave the rink and it’s like every other night where I’m telling him to shut the door behind him,” Hamilton joked. “He puts in the time and he puts in the effort.”

There was a lot to like when it came to committing to play his college hockey at North Dakota. Dunbar said he “fell in love with the program” during the recruiting process.

“All of the amazing guys (that have gone there), you see what they’ve done as players,” Dunbar said. “The coaching staff is really great. They’re really focused on you and developing you and making you the best player you can be. They have everything that a player needs to develop, and they have the means to get that done. It has such a storied history of success. It was really an easy decision for me.”

Drafted by the Ontario Hockey League’s Flint Firebirds, Dunbar said college hockey was also something he had interest in.

“The development there is unmatched,” Dunbar said, adding that the shorter schedule means more practice time.

Growing up in the Michigan Sault, Dunbar also spent time watching Lake Superior State Lakers games as his mother Kris served as athletic director at LSSU and he added that being around the Lakers program growing up also played a role in choosing college hockey over major junior.

As he prepares for the next step in his hockey career at North Dakota, Dunbar is looking to continue developing his overall game.

“My decision-making has developed the most (since minor midget),” Dunbar said. “Everything gets faster as you move up, but just trying to make sure that every day I develop is what got me here from minor midget. I’ve had great coaches and teammates all the way through pushing me to be the best I can be and letting me develop.”

As college coaches began asking about Dunbar, Hamilton said it was an easy sell.

“Everyone came down to our office excited and wanting to speak with him,” Hamilton said. “Everybody loved what they saw. From our side, there wasn’t much of a sale that had to go on. Everyone’s question always was ‘How much better can he get? How much further can he take his game?’ We’re sitting here watching, on a daily basis, his improvement and how he is starting to read and understand the game. As you do that, it just slows down out there for you and you’re able to make higher-quality plays.”

As his game continues to develop, it’s safe to say the excitement surrounding Tyler Dunbar’s game will continue to do the same.