Big play is the difference at home for Steelers

The result wasn’t ideal but there were some positives for the Sault Steelers on Saturday night.
Jun 9, 2019 12:00 AM By: Brad Coccimiglio 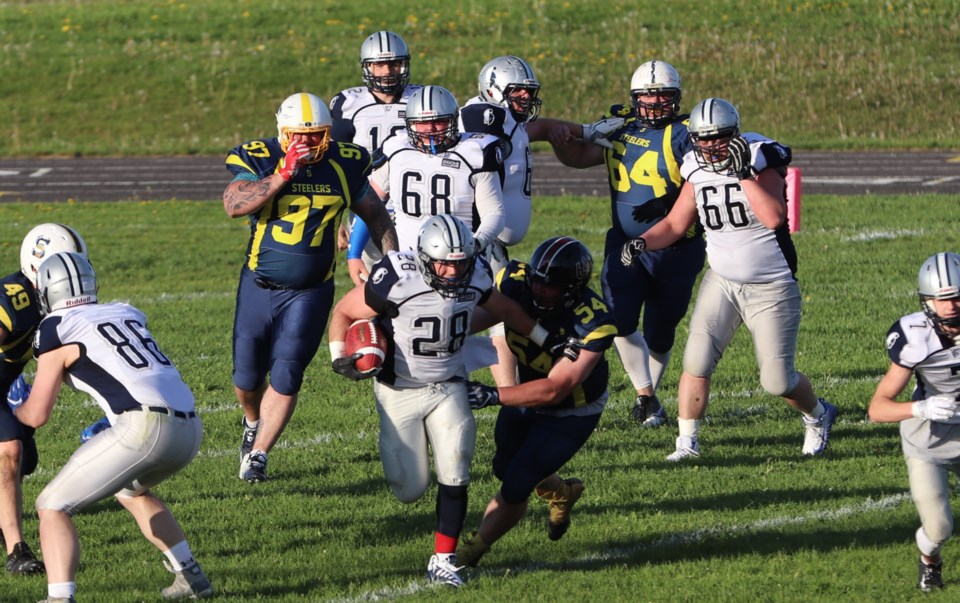 The result wasn’t ideal but there were some positives for the Sault Steelers on Saturday night.

One big play was the difference as the Steelers dropped an 8-6 decision to the Sudbury Spartans at Rocky DiPietro Field in Northern Football Conference action.

Moments after taking a 6-0 lead, the Steelers surrendered a touchdown on the subsequent kickoff and that proved to be the difference in what was a defensive contest.

For the Steelers, the defensive side of the ball was a positive.

The Steelers opened the scoring late in the third quarter as Forrest Jones ran the ball in from 15 yards out, giving the Steelers a 6-0 lead with 2:50 to go in the quarter.

On the kickoff, Nicholas Rideout returned the ball 100 yards for a touchdown. A convert gave the Spartans a 7-6 lead.

“That was the dagger,” Lewis said of the kick return.

Sudbury took an 8-6 lead thanks to a rouge with 6:42 to go in the fourth quarter.

“Our offence, we’ve got a lot of great athletes and we’re trying to work everything in system-wise,” Lewis said. “We’re so close to clicking. We’re a block away from blowing it up on the running game. A catch or two away. It’s just stuff that need more reps.”

At halftime, the Steelers honoured former players Matti Tucker and Scott Booth, who were inducted into the NFC hall of fame.

The Steelers fall to 1-2 with the loss while the Spartans remain unbeaten with a 3-0 record.

The Steelers return to action on June 15 at home against the North Bay Bulldogs. Kickoff at Rocky DiPietro Field is set for 7 p.m.