The Soo Greyhounds coach is also talking contract with the team as his current deal expires this summer
May 26, 2018 5:00 PM By: Brad Coccimiglio 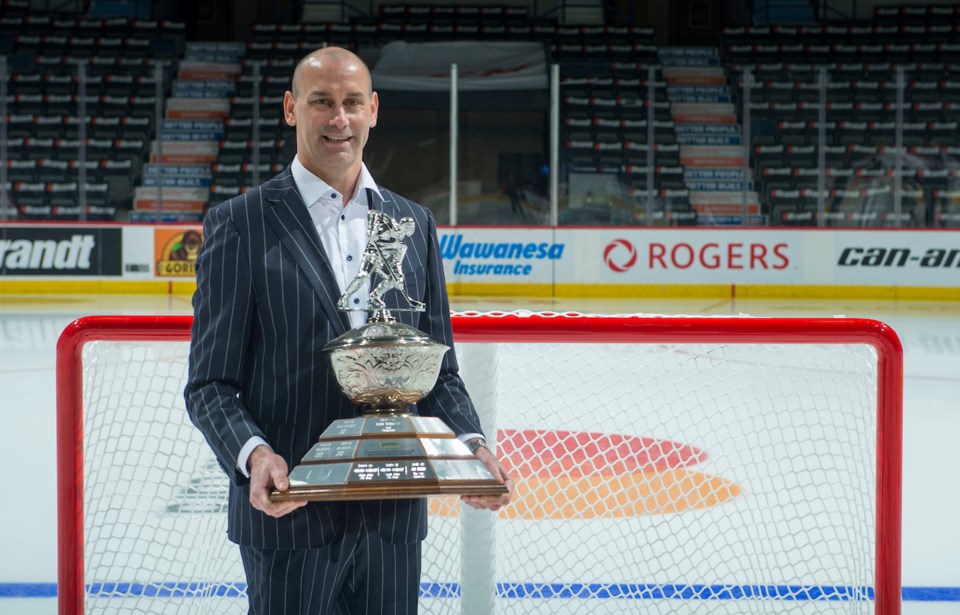 REGINA, Sask. – He called it “a little bittersweet.”

Soo Greyhounds Coach Drew Bannister was hoping to be in Regina, Sask. this week competing in the 2018 MasterCard Memorial Cup.

Instead, on Saturday Bannister was named the recipient of the Brian Kilrea Coach of the year award following a banner year with the Greyhounds.

“This is a little bit bittersweet,” Bannister said. “I’d like to be here with a group of kids that were very committed throughout the year but in the same sense I’m very proud of the accomplishments of our team. This is an outstanding award for our organization to have.”

“To me, this is an organizational award. It starts with our players that I’ve had over the last three years,” Bannister said while also crediting Associate Coach Joe Cirella, Assistant Coach Ryan Ward, the late Dr. Lou Lukenda and current team president Tim Lukenda.

Bannister spoke on Saturday as well regarding his contract situation. Signed to a three-year contract when he joined the team three seasons ago, Bannister’s contract is set to expire this summer.

“We’ve talked,” Bannister said. “Tim, myself and (General Manager) Kyle (Raftis) have had an opportunity. We didn’t want it to become a distraction during the playoffs, so we held off. We had an understanding that we were going to speak. In the next few weeks we’ll probably see what my future path holds.”

“The last three years, I’ve been extremely lucky to be a part of this organization,” Bannister added.

Bannister spoke of how much he felt he has developed as a coach in his time with the team.

“You’re always having to adapt to different circumstances and different individuals within your team,” Bannister said. “The communication factor, I’ve been building on that over my three years and understanding the body language of the players. Every year you’re learning something new about yourself in a positive way and a negative way.”

Bannister called the working relationship he has with Cirella and Ward one that sees them challenge each other.

“It’s extremely important to have good synergy between the staff,” Bannister said. “The one thing with Joe and Ryan, they’ve done an outstanding job of challenging myself to think outside the box and make sure we’re looking at every avenue to make ourselves better and our hockey team better.”

The season was filled with many proud moments for Bannister.

“We did a lot of amazing things,” Bannister said. “There were a lot of individual accomplishments by our players, the unbeaten streak we had and the season overall that we had. When you look back at that, you look at the work that each individual kid put in.”

Bannister called the Greyhounds 23-game winning streak and the way the team found ways to win games as one of the most memorable things from this season.

“The way we were able to win under difficult circumstances during the streak,” Bannister said. “Having some pretty important players out of our lineup and seeing some of our younger players step up and take a different role. When you look back at it, a lot of people overlook the target that was on our back on a daily basis and how difficult it is to come to the rink and compete and not let yourself become complacent with where you are. For teenagers, that’s really easy for them to do. Our group was a special group. They pushed themselves and held themselves accountable. They understood what they were going into on a nightly basis.”