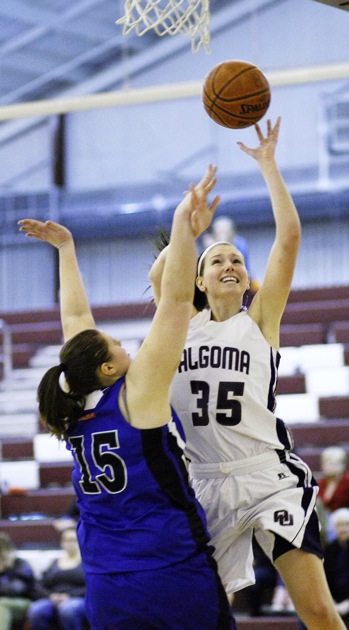 The Algoma women earned a bye into the championships by finishing in a tie for first place in the OCAA west division with a record of 16 wins and two losses.

Algoma has been consistently ranked in the top 10 in Canada for much of the season.

The Thunderbirds will open the tournament with a quarter-final match up against Seneca College Thursday, February 28 at 1 pm.

Algoma's head coach, Ryan Vetrie, says his team has been working all season for this opportunity.

"Our team has been working hard since training camp for the chance to represent Algoma University at the OCAA championships. We will carry the same mentality as we had during the regular season - one game at a time."

Although the team has improved a great deal from last year's squad, Vetrie states that the standards have not changed, and he attributes the success of the team to the closeness of the players.

Of the 10 players, four are returning veterans, including Amanda Orr, Corina Bruni, Brianna Mandolesi (pictured), and Meagan Delfre, who had taken the previous year off from playing.

The experience of this core group helped the rookie players mentally.

These veteran players took on an active leadership role from the beginning of training camp, through the opening of the season, and continue to do so today as they prepare for the OCAA Championships.

In addition to veteran players, there is a wealth of OCAA experience behind the bench.

Vetrie was a member of the Men's Silver Medal team in 2007, as was Assistant Coach Pat Murray.

Team Manager Lauren Wozny, who played for the Thunderbirds from 2008-2012, has been to the OCAA Championships as recently as last season.

Mandolesi, who acts as a leader to the rookie players, is optimistic about the team's chances at the OCAA Championships.

"As a team we are all very excited for Provincials. We have high hopes but are still entering with the mindset that we have to play the full 40 minutes. Nothing will be given to us. We just have to focus on 'our game' and play the way we have all year."

Seven of the 10 Lady Thunderbirds have their roots in Sault Ste. Marie, having played high school basketball here.

Current Coach and Athletic Director of St. Mary's College, Dave Zagordo, had the privilege to coach two of the current players, Delfre and Kathleen Thorburn. Zagordo takes great pride in both girls' past history as Knights players.

"I have seen great improvement from them off the bench over the course of the past few years."

Zagordo, who has attended and refereed a few of this season's games, added that both Delfre and Thorburn have done very well this season, and are also excelling academically, making them a dynamic pair.

He keeps in contact with Thorburn, who is an Assistant Coach for the Knight's Junior Women's Basketball team.

Vetrie adds that playing for a familiar audience at the GLC has had a significant impact on the girls this season.

"It must be a great honour and instill great pride in the girls to be able to play for family and close friends as the home team and fan favourite. It helps being able to play for and represent such supportive communities, as Algoma University and Sault Ste. Marie."

While the Lady Thunderbirds are not playing on their home court on Thursday, they will have strong support back home amongst students, staff, and the greater community.

Their pursuit of an OCAA Championships medal begins at 1 p.m. on Thursday against Seneca.

For more information about the tournament, please visit here

All games will be streamed live here