Yes, Pointe Estates is back on the table

The Sault Ste. Marie Region Conservation Authority has re-opened a doorway to development of the controversial Pointe Estates.
0
Dec 13, 2011 9:58 PM By: Brad Coccimiglio 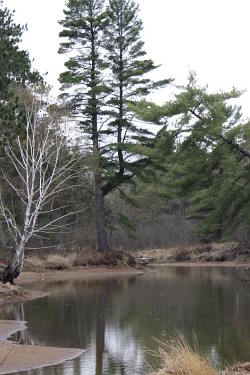 The Sault Ste. Marie Region Conservation Authority has re-opened a doorway to development of the controversial Pointe Estates.

At a meeting late Tuesday afternoon the Conservation Authority decided to allow developers to go forward with a hydro-geological study provided the study adhears to Ontario Ministry of the Environment guidelines.

Jeffrey Avery, manager of Avery Construction and one of the primary proponents of the Pointe Estates proposed development, was not in attendance on Tuesday night but is a contact point for the Conservation Authority.

The proposed Pointe Estates development would be built in two phases and include 91 rural estate lots and would destroy more than 150 acres of wetland on the shore of the St. Mary's River.

Neighbours in the area have vigorously opposed the development based on numerous concerns since the potential development first came to light in 2007.

Some of the concerns include:

He reminded authority members of the passing of a regulation in 2005 that protects wetlands, meaning the land cannot be built on, and of a board resolution that was seconded at the time by current Chair Ken Lamming.

Lamming said the area is classified as a ‘minor wetland’.

The area doesn’t not meet some of the criteria for provincial designation as a significant wetland, he said.

This means some development can be allowed on it under some circumstances, said Lamming.

One of the reasons the conservation authority denied approval to develop Pointe Estates some time ago is because the initial proposal from Avery did not sufficiently answer some concerns that were raised, one of which was water quality and another was well service in the area.

The proposal to complete a hydrogeological study approved on Tuesday would give Pointe Estate developers an opportunity to address these two concerns.

The study proposed by developers would have seen three wells but the authority granted a conditional approval to conduct the test which stipulates the test conform to ministry standards.

According to ministry guidelines, a hyrdrogeological study would need up to six wells to be used for analysis.

The conservation authority is planning to contact Avery regarding the development with some new requests, specifically to increase the previous proposal to meet ministry guidelines in order to perform the hydrogeological study in the area.

Initially, the development was thought to be a no-go, but the Conservation Authority has again decided to entertain the possibility of allowing further study of the wetland under its protection which could lead to the development going ahead.