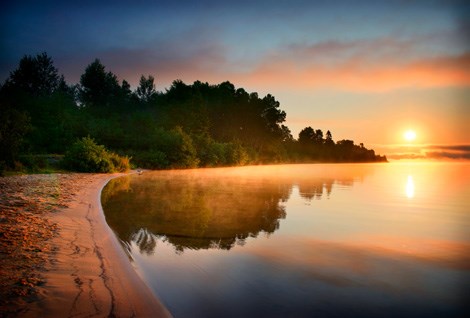 Over 600 contestants and more than 1000 eligible photos from across Ontario competed for the 1st prize of a new Canon Rebel digital camera with accessories.

Early January 2010, a staff member from the SSMRCA contacted Favretto.

Marlene McKinnon, GIS specialist for the SSMRCA had come across some of Favretto’s photos on the internet and encouraged him to enter the contest.

Favretto, a GIS technician at the Sault Ste. Marie Innovation Centre, says he has been taking photos since about 2004. “We were thrilled that Mr. Favretto’s picture took top honours”, said Linda Whalen, general manager of the SSMRCA. “His picture depicts perfectly the natural beauty of Mark’s Bay. "We hope everyone, residents and tourists alike enjoy their time in our conservation areas."

In addition to Mark’s Bay, the SSMRCA owns and manages the Hiawatha Highlands, Fort Creek, and Shore Ridges Conservation Areas.

Full details on the results of the 2009 Ontario Conservation Areas Photo Contest can be found at www.ontarioconservationareas.ca.