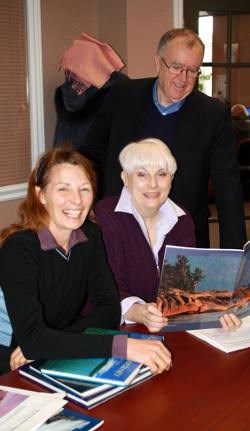 The group is organizing another public information session for early March at Alexander Henry High School to do just that.

Gillian Richards, a member of SOAR, told reporters that even though the deadline for comments at the environmental registry website has passed, it is not too late to stop the projects.

"They haven't started building them," Richards said. "Our goal is to stop them."

Richards and SOAR member Joanie McGuffin joined Sault MP Tony Martin at his office to give an update on the group's progress and plans.

The environmental registry contains public notices about proposals for development that may affect the environment.

It's supposed to be a mechanism for people to participate in decisions about the areas they live and work in.

Decisions - like when and were to build industrial wind complexes.

It's difficult to get any specific information about them, she said.

Most people haven't even heard of the environmental registry - even people that Richards thought should know something about it, like the person she spoke to in Ontario Energy Minister Brad Duguid's office when she called to find out what the ministry definition of end of the day was.

Apparently some of the people using the site thought they had until midnight to submit a comment when it was, in fact, closed at 5 p.m.

"Did you know that, if you want to send a written comment instead of using the site, you have to use the site to get the address?" she said.

So members of SOAR have banded together to gather and distribute as much information as they can find, said McGuffin.

Martin and SOAR members are planning another public information session for March to inform people about developments SOAR says will devastate local resources.

This coming weekend, they will also be hosting Western Arctic MP Dennis Bevington for a two-day tour of what stands to be lost if the planned industrial wind projects go forward.

The problems all to back to the Green Energy and Green Economy Act, a point on which Martin, Richards and McGuffin agree.

They said the act and subsequent actions by the government have led to a frenzy of development, while excluding the people who live on those lands being developed.

Richards compared Ontario's move to portion up and offer out its lands for development to selling seats at a rock concert.

Developers lined up to stake claims like fans lined up for tickets, only Ontario is paying those developers to buy the rights to develop the land through subsidies.

And it's promising to pay them for the electricity they generate from it.

Meanwhile the government is also cutting home retrofitting programs that would conserve energy, while building gas-fired generating stations to pick up the slack when the wind doesn't blow.

"Nobody is against green energy or a green economy," said Martin. "We just want to make sure it's done sensibly."

That includes proper scientific study of the possible effects of a project, no matter how green it's developers say it is.

It also includes meaningful consultation with the people who will be affected by green projects, including actions taken to fully address the concerns those people bring to the table.

"Who is going to benefit from this project?" asked McGuffin. "There may be jobs to build it but what happens after it's built? Will anyone still come here when we've contaminated our vistas with industrial machinery? What will happen to the jobs in the tourism industry?"

The people of Ontario are certainly not going to benefit from it, she added.

Ontario tax dollars are subsidizing the construction of a wind project that may not even send electricity to them.

Martin agreed, saying that electricity generated in Ontario also goes to the United States and Quebec.

"The ones who benefit from this are the shareholders in the companies that build the projects," said McGuffin.

The full text of a news release from Tony Martin's office follows.

The Lake Superior Conservancy wants this area designated as a heritage site. “Mr. Bevington has worked a great deal on a national energy strategy and also has a background in energy in the private sector,” Martin said. “It makes no sense to me to move aggressively on these wind projects opposed by many in the community until we’ve done due diligence on energy needs and the necessary related programs to help the environment and reduce our bills.” “When New Democrat Leader Jack Layton visited the Sault earlier this month, we were in a home of a family that took advantage of the eco-energy retrofit program to save $200 a month on their bills and reduce C02 emissions by more than 8 tons a year. That is the type of program we need in a national strategy.” Details of Bevington’s tour will be released later this week. *************************