During the past month, the city has lost one trackless vehicle, four snowblowers and a late-model snow plow
0
Feb 22, 2019 2:57 PM By: David Helwig 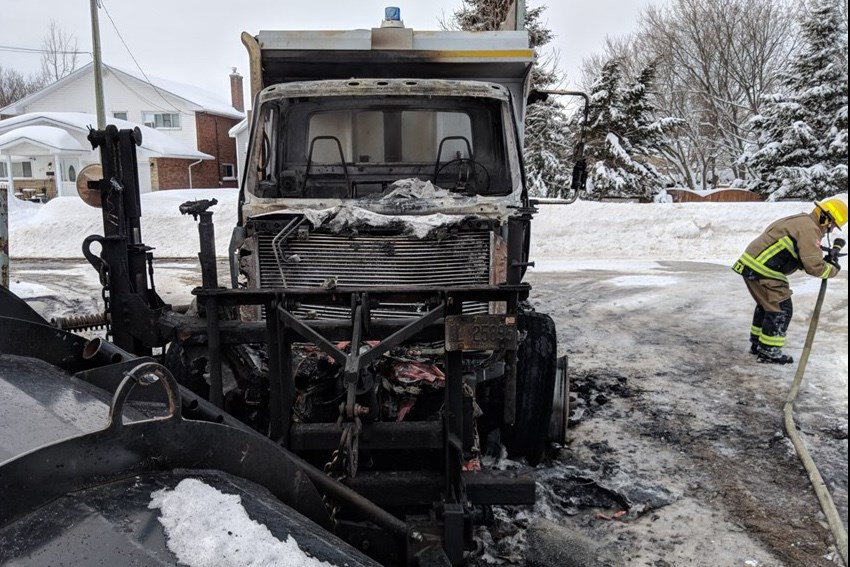 The city snow-plowing truck that burnt to a crisp last week at the intersection of Grangemill Road and Wilson Street appears to have demolished the city's public works vehicles reserve.

A resolution placed on the agenda of Monday's City Council meeting by Ward 5 Councillor Corey Gardi and Ward 2's Lisa Vezeau-Allen laments that councillors recently rejected a public works department request for an additional $750,000 for vehicles.

Over the past month, the councillors say, the city has lost one trackless vehicle, four snowblowers and the late-model snow plow.

Gardi and Vezeau-Allen are asking for $250,000 increases to the public works vehicle reserve in each of the next three years.

The following is the full text of the resolution as it appears on the City Council agenda.

SooToday will livestream the meeting starting at 4:30 p.m. Monday.

Whereas 45 per cent of the public works winter maintenance fleet is over nine years old and 23 per cent is beyond its life expectancy; and

Whereas during the last month of winter control, public works has lost a trackless, four blowers and a snow plow to either repair or irreparable damage; and

Whereas the age of the winter control equipment makes the challenge of keeping the city streets free and clear of snow and ice more difficult; and

Whereas public works vehicle reserve is insufficient to replace the vehicles that need to be replaced across the entire public works department, including the vehicles needed for winter control and maintenance; and

Whereas public works requested a budget increase of $750,000 this year to address its vehicular needs but did not receive that increase;

Now therefore be it resolved that council direct staff to include a $250,000 increase to the public works vehicle reserve in the 2020 preliminary budget with a view to providing further increases of $250,000 in the 2021 and 2022 preliminary budgets respectively, pending a fleet services program review planned for 2020.