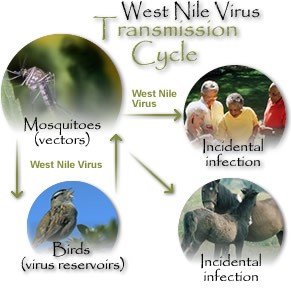 “We want to remind people to be vigilant about their personal protection against the bite of a mosquito as well as reducing mosquito breeding grounds on their property” says Sarah Bunjevac, Public Health Inspector at Algoma Public Health (APH).

By the end of 2008, the Ministry of Health confirmed the presence of West Nile Virus in birds in all of Ontario. Since then, the Ministry has discontinued individual dead bird testing. Algoma Public Health does not test birds unless a cluster of dead birds is spotted.

WNV is an illness that can be spread to humans by the bite of an infected mosquito. Mosquitoes become infected when they bite an infected bird.

How to protect yourself:

How to reduce the mosquitoes on your property.

For more information on West Nile virus, visit our website or join the conversation on our Facebook or Twitteraccount.