Bags of rat poison have been turning up on a Moody Street property, and it's feared that a pair of canines are the intended targets
Jul 10, 2020 6:30 PM By: James Hopkin 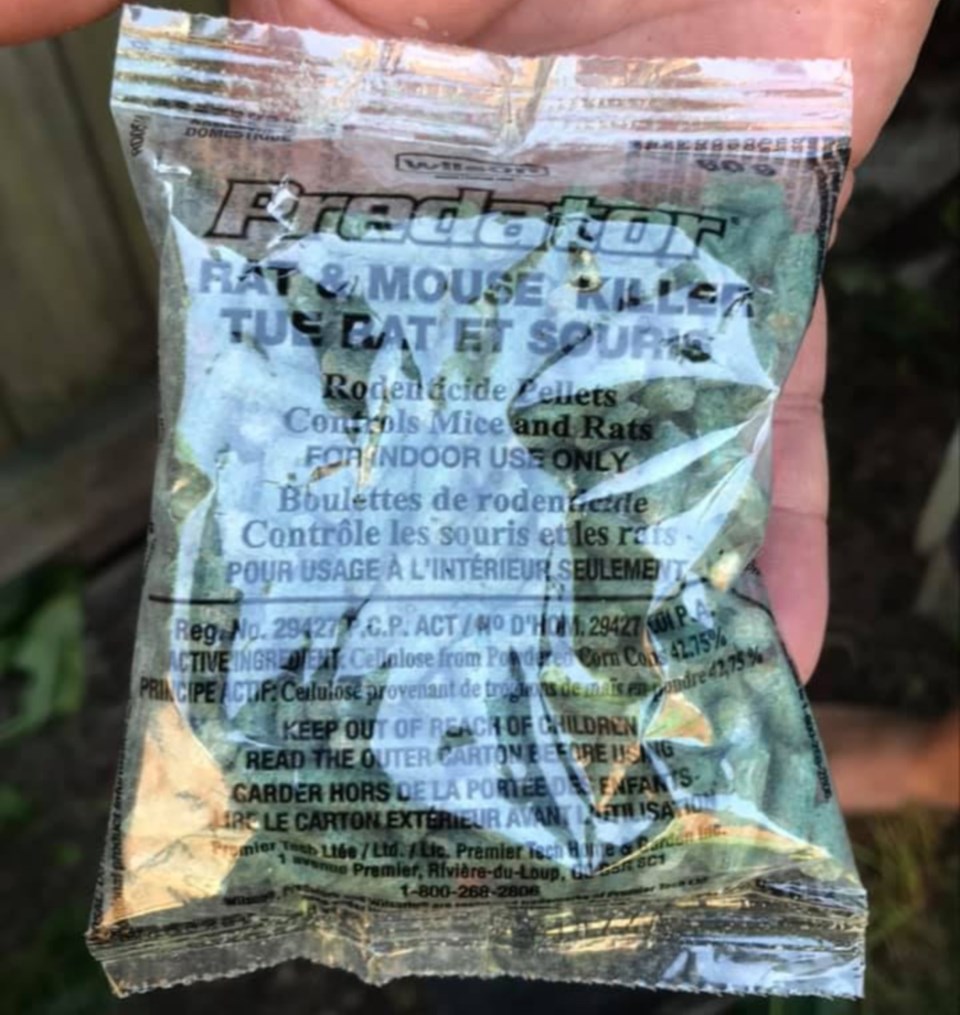 Jody Schmidt believes the three packages of rat poison found in her yard were placed there deliberately. The package shown in this photo was one of two packages discovered by her husband July 2. Facebook photo

Jody Schmidt doesn’t think the packages of rat poison being found in her yard can be chalked up to mere coincidence or happenstance.

She feels that someone is intentionally trying to harm her two dogs after her husband found three bags of rat poison in the yard of their Moody Street residence on two separate occasions.

“They’re our babies, and to think that someone could possibly be intending harm for them is very, very disturbing to us,” she said.

The first bag was discovered in early June, while the other two bags were found July 2. The Schmidts filed a report with Sault Ste. Marie Police Service following the second occurrence.

“The first time, it was just one bag, and it was kind of stuck halfway underneath the fence in our yard,” Schmidt said.

But the second time around, there were two bags - one of them torn open. Schmidt says it’s unclear if either of her dogs got into the packages.

“It didn’t look like a lot of it was missing, so if the dogs ate any, it was very, very little,” she said.

According to Schmidt, a considerable amount of barking is present in her west-end neighbourhood, and that judging from some of the comments made to the couple by neighbours, their two dogs - Piper and Sadie, a pair of mixed-breed dogs rescued by the Humane Society - are being blamed for the excessive noise.

“Our dogs, they don’t create a disturbance. When they’re out in the yard and they bark once, we let them in, because the last thing we want is to be a nuisance to neighbours,” she said.

The Schmidts now keep an eye on their dogs at all times when they’re outside and check the grass and the perimeter of the yard in the event that more packages of rat poison appear.

Schmidt originally posted details of both incidents on social media in an effort to warn other dog owners in the area.

“We would never, ever want to see anyone harm any dogs. We are animal lovers, and that’s one of the crappiest things you can do because dogs are part of people’s families. They’re like our kids,” said Schmidt. “Whether you like the dogs or not, whether you like us or not - that’s just a cruel thing to do to an innocent animal.”