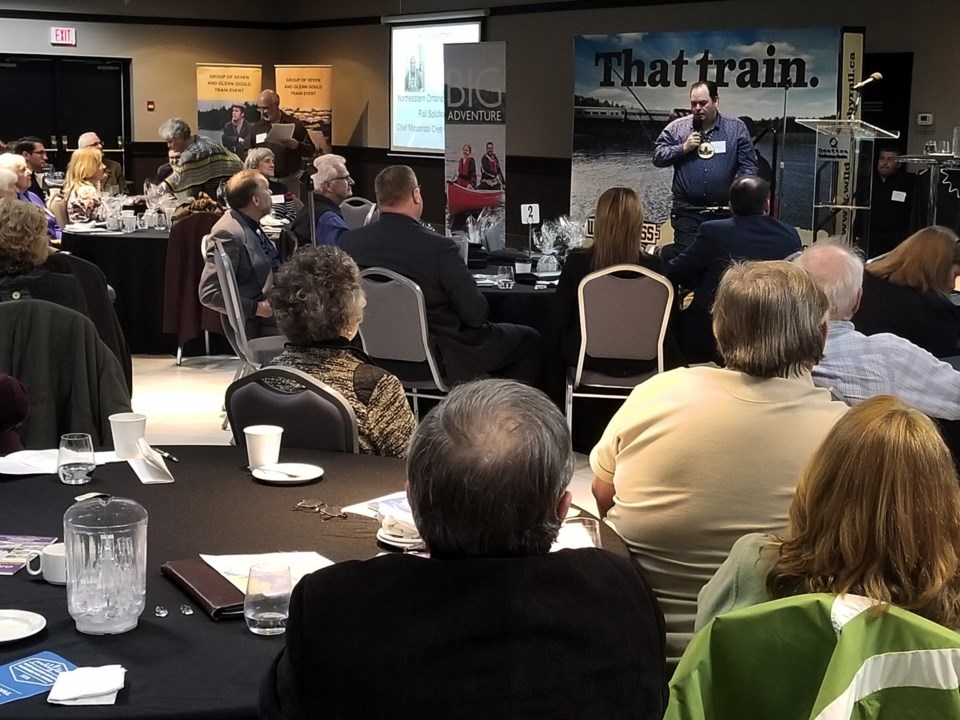 The Northeastern Ontario Passenger Rail Summit brought together a number of experts and guest speakers Thursday to talk about the issues and impacts surrounding passenger rail service.

It’s the first conference of its kind for the Northeastern Ontario Rail Network (NEORN), which counts the Coalition for Algoma Passenger Trains (CAPT) as one of its member organizations.

“We’ve worked hard, the committee, we’re not going to give up,” said NEORN and CAPT co-chair Howie Wilcox. “We’re going to keep going.”

Missanabie Cree First Nation Chief Jason Gauthier has been in talks with the federal government to acquire a portion of that loop, known as the Algoma Central Railway (ACR) running between Sault Ste. Marie and Hearst.

But those talks have proven to be somewhat of a ‘rollercoaster’ for the First Nation, as it’s been trying to establish the Mask-wa Oo-ta-ban [Cree for ‘bear train’] since the ACR shuttered its passenger rail service in the summer of 2015.

“We’ve been working on getting the passenger service for years, and I think it’s been a rollercoaster for us,” Gauthier said. “We’ve had a strong push for it to happen, and we’ve had some good back-to-back meetings and then it’s gone quiet for awhile.”

Gauthier says that at this point, it doesn’t matter what entity takes over the passenger rail service. He just wants passenger rail to happen along that corridor, a portion of which runs through the traditional territory of his First Nation.

“It’s never been really about who does it or how,” Gauthier says of his First Nation’s plans for the ACR. “There is a chance that it might happen that way, but no matter how it happens, it’s important that it does happen.”

Following a day of guest speakers and presentations, NEORN held a political panel, where all major political parties were invited to the summit to offer their platforms on the lack of passenger rail service in northeastern Ontario.

CAPT co-chair Linda Savoury-Gordon confirmed that Algoma-Manitoulin MPP Michael Mantha made an appearance to speak earlier in the day. Kara Flannigan from the Green Party and Sault Ste. Marie MPP Ross Romano from the Progressive Conservative Party spoke to the crowd during the panel. Noticeably absent from the political panel was the Liberal Party.

Minutes before the panel began, Romano told SooToday that a commitment to investment in infrastructure should be the starting point, whether it’s the Northeastern Ontario Passenger Rail Loop or the Ring of Fire project.

“We’re at a point now where we’ve got a significant amount of youth outward migration. It’s because of the reduction in services that we’ve seen for so long,” Romano said. “We need to improve that, and if we want to see those challenges change and improve, and we want to see that meaningful change that we all in the region want, we have to start investing in basic infrastructure, transportation infrastructure.”

“Having that in place will allow the economic potential within the region to thrive, and it will allow us to realize all those socioeconomic benefits and necessities that everybody across the province enjoys.”

Wilcox says that he’s hopeful that the upcoming provincial election will help NEORN be heard in the future.

“We have to keep pressing government, and some of the parties indicated today that they have it in their platform to do something with passenger train service, but we just have to keep putting the pressure on them,” Wilcox said. “It’s got to be done.”