Vince can’t wait to show off curling skills in February

The Sault’s Vince Coccimiglio was inspired to take up curling after Team Jacobs Olympics success
Dec 16, 2018 4:00 PM By: Darren Taylor 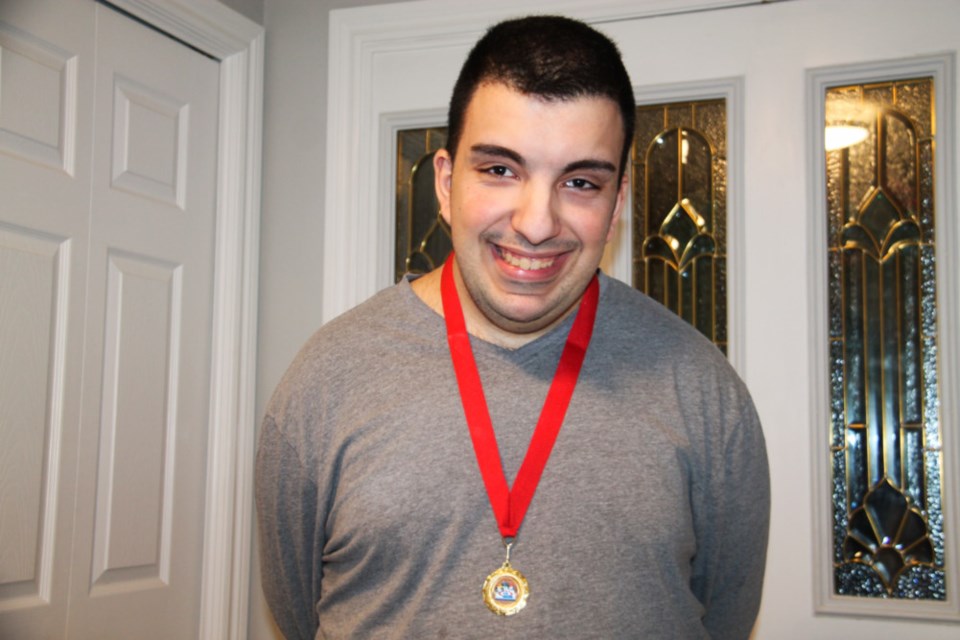 The Sault’s Vince Coccimiglio, who will take part in the upcoming 2019 Special Olympics Ontario Provincial Winter Games, to be held at various venues in the Sault and area Jan. 31 to Feb. 3, shows off a medal won in a previous curling competition, Dec. 13, 2018. Darren Taylor/SooToday

Vince Coccimiglio (known as Vinny to his friends) is looking forward to joining fellow Sault athletes at the 2019 Special Olympics Ontario Provincial Winter Games, to be held at various venues in the Sault and area Jan. 31 to Feb. 3.

Vince, a curler, was born in London, Ontario, and raised in Sault Ste. Marie.

Vince, 20, has been curling for three years.

“It’s fun. I get to curl with my friends (on a team with fellow Special Olympics athletes Nathan and Shevy Harman and Josh Chartrand),” said Vince, who told SooToday he is constantly learning how to improve his skills on the rink.

“I love throwing the rocks,” said Vince, who practices every Sunday morning at the Community First Curling Centre.

Vince has won a medal in a previous curling competition, qualifying for the 2019 games in the Sault (justifiably proud and showing the medal off for SooToday in an interview at his home last week).

A dedicated viewer of big league hockey, baseball, basketball and football, Vince, a Toronto Maple Leafs fan, will be spending the Christmas holidays with family members in Nashville, where he hopes to attend an NHL Nashville Predators game.

“I’m looking forward to meeting all the other teams,” said Vince, who will get the chance to bond with fellow athletes from across the province at The Delta, where Special Olympians will stay and mingle during the games.

“It’s really encouraging (to know friends and family will root for him as he curls in front of the hometown crowd during the games), I’ll enjoy the support,” said Vince, who said he was inspired to take up curling by Team Jacobs Olympic gold medal-winning performance.

Vince is a first-year Sault College student, enrolled in the school’s General Arts and Science program, with an interest in construction.

He also assists his uncle renovate buildings, volunteers at the Sault YMCA and is currently taking electric guitar lessons.

“I’m an old soul,” smiled Vince, who said he enjoys the songs of artists from many years ago, such as Dean Martin.

“We’re very proud of him. It would be great to see him go off to the Nationals,” Vince’s mother Sally said.