Soo Jr. Greyhounds U18 coach Jamie Henderson shot a video of his son Brady taking laps on the family's outdoor rink, but he never expected this kind of response
Feb 1, 2021 2:30 PM By: James Hopkin 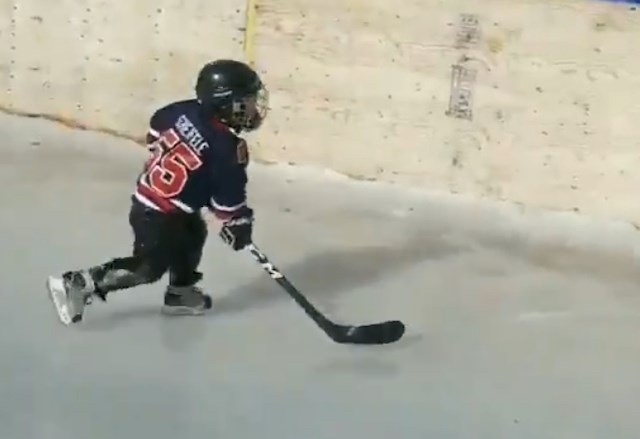 Soo Jr. Greyhounds U18 coach Jamie Henderson says his phone has been blowing up since Hockey Night in Canada shared one of his videos on Twitter over the weekend.

The video shows his three-year-old son, Brady, taking some laps around the family’s outdoor rink in his hockey gear. Henderson tells SooToday that it’s not uncommon for him to shoot footage of Brady for friends of the family who reside out of town.

“People are taking interest in how he’s doing and that, so you get the phone rolling and all of a sudden, he starts yelling and screaming and laughing and all that, and that turns into a funny little video,” said Henderson. “We certainly didn’t expect that kind of response, but you know, it’s kind of neat.”

Brady usually gets out for a skate in both the morning and afternoon, and sometimes, he even hits the ice for a third time, either before or after supper.

“He started skating last year - probably about this time last year he started kind of moving on his own. But he takes a real interest in it. He waters the rink, we’ll shovel it together, then we’ll water it together. He wants to water it pretty much on his own now,” Henderson said.

The three-year-old hockey fan has pretty much grown up around the local rinks, joining his father at Soo Jr. Greyhounds practices and games. Henderson says that Brady even hangs out in the dressing rooms and interacts with the players.

“He’s at such a fun age. It’s really neat to see, and it’s fun for the family,” Henderson said.