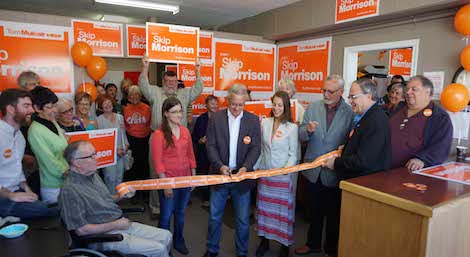 "We know that New Democrats defeat Tories, here in the Sault and across Canada," said Morrison, to the gathering of about 75 supporters, friends and family who crowded into the downtown location.

"We're ready to get the job done for the seniors, for the young families, for the workers of Sault Ste. Marie. We'll do it without taking anyone for granted. Over the next 30 days we will work harder, we will talk to more people, and we will bring a balanced, progressive plan for change to the door."

Claude Gravelle, first elected in 2008, gave a touching tribute to his long-time colleague Tony Martin, highlighting his dedication and hard work on behalf of the Sault, and that even members of other parties missed his presence in the House of Commons over the past term.

He then lauded Skip Morrison for his diverse background and his passion for the issues in this election campaign.

"Skip Morrison will stand up for the people of Sault Ste. Marie," said Gravelle. "He will make a great MP."

Visitors and volunteers are always welcome.