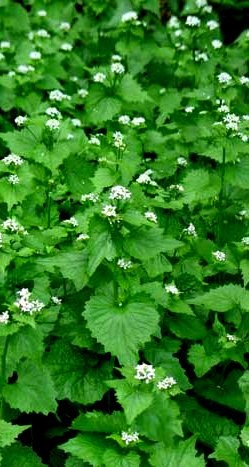 SAULT STE. MARIE, ON - (June 9) - An invasive plant which causes growth loss to maple trees has been found on St. Joseph Island.

This discovery poses a significant threat to the Island's lucrative maple syrup industry, which is one of the largest in the province. Populations of this invasive plant are extremely aggressive and spread quickly, on average doubling in size every four years.

Garlic mustard produces toxins which result in the loss of soil microbial diversity and its associated benefits to the health and growth of hardwoods.

It also out-competes native forest plants preferred as food by wildlife and has been known to dominate forest and other ecosystems it invades.

If Garlic Mustard has been eaten by dairy cattle it makes milk unusable.

"Garlic mustard poses a serious ecological and economic risk to maple forests and the maple syrup industry," says Errol Caldwell, Research Director of SSMIC. "We are asking landowners for their cooperation in identifying other possible locations that might have been invaded so that a coordinated management strategy can be developed." Each garlic mustard plant can produce up to five thousand seeds.

The spread of garlic mustard is often linked to animals and human activity.

This makes it very important to thoroughly clean shoes, pockets, pant cuffs, and equipment in and around infested areas as seeds can very easily be carried and spread to uninfected areas.

ISRI and SSMIC strongly encourage land managers, farmers, landowners and community members to vigilantly monitor for garlic mustard on their property on a regular basis.

In order to avoid larger, more labour-intensive control efforts they ask that the public report any suspected plants to the Ontario Ministry of Agriculture, Food and Rural Affairs toll-free line at 1-800-461-6132 or by email to ISRI at: invasivespecies@algomau.ca or via the ISRI Report a Sighting link at www.isri.ca. About garlic mustard

Garlic mustard (Alliaria petiolata) was introduced to North America by European settlers as a culinary herb and medicinal plant during the 19th century.

A distinctive garlic odor is emitted when the leaves are crushed.

At maturity this white flowering plant can range from between 15 cm to 1.2 m in height.

Garlic mustard thrives in shady, moist areas but can also withstand a wide range of light and moisture conditions.

It is a biennial, meaning it takes two years to complete its growing cycle, then it dies.

First year plants are referred to as basal rosettes, with just a few kidney-shaped leaves remaining green throughout the winter.

The most effective method of controlling garlic mustard is to prevent its initial establishment.

The variety of locations and conditions under which this plant grows means there is not a universally appropriate control treatment and each case needs individual assessment.

High risk areas include trails, woodlots and disturbed areas as well as homeowner properties and gardens.

All treatment methods require repeated treatment for at least five years as seeds may remain viable in the soil and single-time removal may worsen the invasion due to soil disturbance.

The first is manual pulling of entire garlic mustard plants including their S-shaped taproots, before seed maturation in June and July.

Dispose of clippings through incineration or by sealing them in bags that can either be burned or adequately buried at municipal landfills.

Do not compost the plants because the seeds will survive. The second recommended method is chemical treatment applied during the dormant season of native species to avoid losses to native plant species.

Prescribed burnings can be an effective control agent when infested areas are too large to control manually.

Both chemical and prescribed burning operations must be undertaken by professionals. Garlic mustard is widely regarded as one of the most prevalent and problematic invasive species within eastern North America's deciduous forest communities.

According to the Nature Conservancy of Canada, garlic mustard has been reported to dominate forest understories within five to seven years of initial introduction. Last year ISRI organized two garlic mustard 'pulls' in this area.

In July of the same year, 5 bags were collected from the Algoma University woodlot, with help from the Ontario Stewardship Rangers, Algoma University and SSMIC staff. An Open House providing further information on garlic mustard will be held at a date and location to be confirmed within the next few weeks.

The Invasive Species Research Institute (ISRI) at Algoma University is a not-for-profit organization with a mandate to provide innovative science-based solutions to the threat of invasive species.

ISRI acquires and disseminates scientific knowledge on the biology and ecology of invasive species, and establishes and supports networks of scientists, academics, public and private sector organizations and community members who share an interest in invasion ecology.

As the Canadian home of the internationally recognised MSc CGT from the University of Abertay Dundee, Algoma University is at the forefront of computer games technology education.