SooToday.com has received the following from Maxine Nash, one of James Loney's Christian Peacemaker Teams co-workers in Iraq. Maxine (shown right) is from Waukon, Iowa and has served with CPT since 2002.
Dec 18, 2005 1:32 PM By: David Helwig 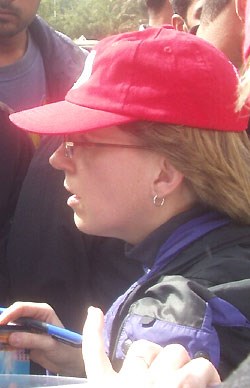 SooToday.com has received the following from Maxine Nash, one of James Loney's Christian Peacemaker Teams co-workers in Iraq.

Maxine (shown right) is from Waukon, Iowa and has served with CPT since 2002.

She has worked for the organization in Iraq since December, 2003.

The following article is copyrighted and appears here by permission of the author:

Today as I write to you the wind is rattling the window, outside a kitten mews for its mother, and occasionally a helicopter or a jet flies overhead.

Otherwise all is quiet.

It's unusually quiet because there are no generators running.

We've had a lot of electricity from the national grid in the last two days, probably because of the elections which were held this week.

In the quiet of the morning I wonder how Tom, Norman, Jim and Harmeet are doing.

I wonder if they are together, or separated.

I wonder if they are suffering in any way.

I don't wonder if they are alive - I feel their souls are among the living.

There has been no news from those holding our friends, and I pray that this silence is simply a time of much discussion.

I pray each day that God would change their hearts and minds, and that they would feel compelled to release them.

I also pray that whatever happens, I and we as CPT will be able to forgive.

I pray that also for Tom, Jim, Norman and Harmeet but realize that I cannot begin to understand what that would mean for them.

In this day, my hope is that our dear colleagues are feeling the love and presence of God.

I also pray that those who are holding them are feeling that same love, for that is truly the only way to go forward from this place.

Thank you all for the love of God we feel flowing from you in messages of support and care.

By far, SooToday.com is the most-visited website in Sault Ste. Marie, Ontario.

Isn't it time you made SooToday.com your home page?

Just click here and we'll make sure you're never out of the loop on all the news from your hometown.