This was no run-of-the-mill visit (video) 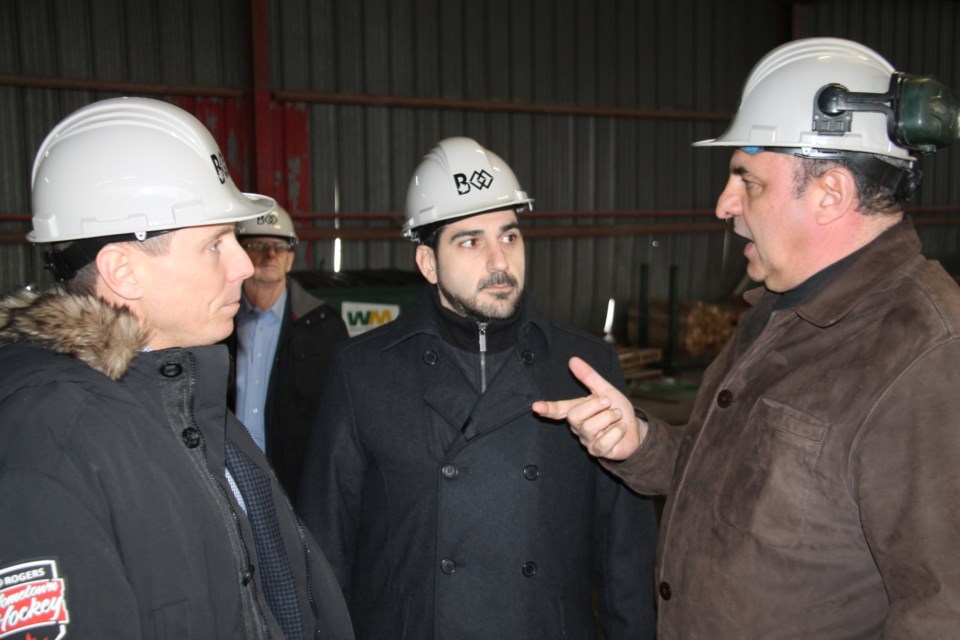 Local Progressive Conservatives are clearly pumped about the coming by-election in Sault Ste. Marie and their chances of representing this riding provincially for the first time since 1985.

“Speaking with Jim here today, he’s got to compete with Michigan.  There are 50 jobs here, another 100 out in the bush, I want to protect those jobs, and right now in Michigan they don’t have cap and trade and hydro prices like we have in Ontario,” Brown said.

Cap and trade and hydro prices, among other factors, have been called job killers by critics.

“We’re going to continue to see a decline in Ontario’s employment if we continue down this path, and that’s why I want to get hydro prices under control, I want to dismantle Kathleen Wynne’s cap and trade to protect jobs in Sault Ste. Marie and Ontario,” Brown said.

“Hydro rates are always a challenge in the industry,” Boniferro told SooToday.

“Cap and trade is up there (as a concern) because we have a natural gas boiler that provides heat and power to our organization, so all of those things coming together has a concern of ‘what’s the future going to look like for us, and what are our expenses going to be?’”

“I think it’s important that Sault Ste. Marie is very well represented in the government, I think David (Orazietti, the Sault’s former Liberal MPP) did that and I think Ross can do that.  That’s my concern as a Sault Ste. Marie business person, is that we have a strong voice in government, we’ve enjoyed that for a number of years and I want to make sure we keep that,” Boniferro said.

When asked by SooToday if Northern Ontario Heritage Fund Corporation (NOHFC) funding would be maintained at current levels in order to support projects in the Sault and across the north, Brown replied with a quick “yes.”

“If anything, I’ve said it’s not meeting the demand and opportunities, and we’ll enhance ways of helping the north,” Brown said.

The party is eager for the by-election to be called after Orazietti’s sudden resignation from provincial politics in December.

“We need to get representation in Sault Ste. Marie, we need Kathleen Wynne to call this by-election and I hope she calls it soon,” Romano told SooToday.

“We are ready to go, and I’m ready to serve the Sault…it’s important to the people of this community.”

Orazietti’s resignation marks the first time since October 1978 that the Sault riding’s seat has been vacant in the Ontario Legislature.

“We feel confident, I feel confident, I’m excited…we had a soft kick- off last night with Patrick’s visit, and I would say to all the residents of the Sault to look forward to seeing me at your door,” Romano said.

Brown and Romano said they had also spoken with other local stakeholders such as paramedics, firefighters and teachers union officials during this current leader’s visit.