This band needs a break (8 photos) 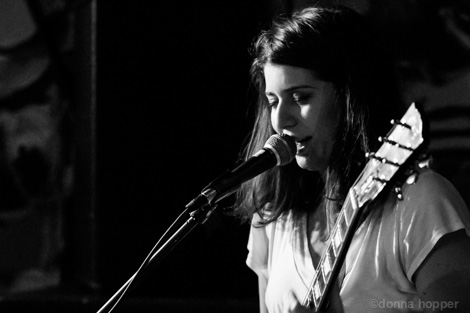 Lex Valentine, Nadia King, and French haven't been around these parts for about three years.

The three returned this past weekend for a performance at Loplops on Queen, and it may be some time before we hear from them again.

Following the release of Magneta Lane's four-song Witchrock EP last year and this current tour, the girls will be taking a bit of a break to explore other avenues and endeavours.

French plans to return to school in order to complete her masters, and sisters Lex and Nadia are currently in the process of recording as their own side project, LOLAA, which tips towards the more poppy side of the music spectrum.

"We're all super supportive of each other. I think that's what makes us really great friends," Lex told SooToday.com. "We want to be able to follow our individual paths and that's why we're probably never going to break up. We allow each other to take the breaks that we need to take."

Starting out as just teens ten years ago, the trio has since toured extensively, released two EPs and two full-length albums, and most recently started its own record label, Splendor House Records.

"We had gotten to a point in our career that we had learned so much, so we thought we'd run our own ship," Lex explained. "We were lucky to find a distributer who was supportive of what we were doing and wanted to release our record. We just decided to remove the middle man."

Lex cited the work and attitudes of Tegan and Sara as well as Serena Ryder as current influences on her songwriting and overall career as she strives to learn the business and grow her skill set.

"They're sexy without being sexual and there's something really empowering about that," she said. "I find that a lot in Canadian artists. It's inspiring and the reason we keep writing records."

To find out more about Magneta Lane, visit the band's official website.