'They had us fooled' says city daycare worker

The daycare facility at Isabelle Fletcher will remain empty for months as result of council's decision not to move municipal daycare centres into the schools
Apr 14, 2016 10:00 AM By: Kenneth Armstrong 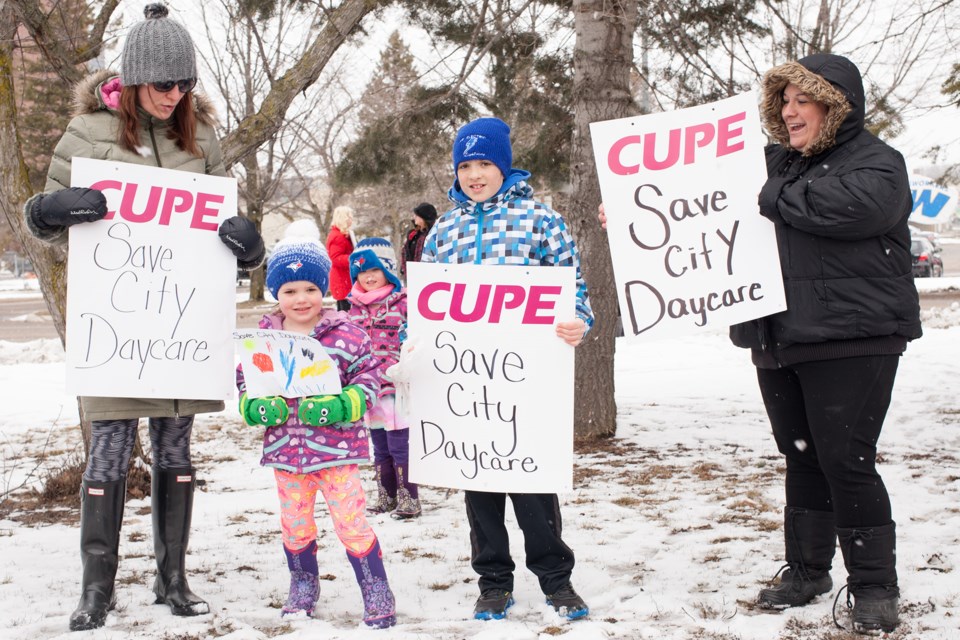 Municipal daycare workers and their supporters seen protesting outside the Civic Centre prior to Monday's city council meeting. As result of a recent council decision, the municipal daycare centres will cease to operate by December 2017. Kenneth Armstrong/SooToday

A municipal daycare worker who is facing unemployment says she and her colleagues were duped when they attended a recent city council meeting, thinking they would be moved into the schools.

Instead, they received notice the city would cease operating daycare centres in December of 2017.

Municipal daycare workers and their supporters picketed in front of the Civic Centre immediately prior to Monday’s city council meeting — even though no discussion on daycare centres was planned.

During a December 7 council meeting, a motion to close the city-operated daycare centres — also known as ‘Option 2’ — failed due to a stalemate caused, in part, by the councillor seat left vacant due to Terry Sheehan being elected as Member of Parliament.

City staff were then directed to report back on the feasibility of ‘Option 5’ — moving the city-operated daycare centres into schools, specifically St. Basil and Isabelle Fletcher Public School.

St. Basil Secondary School closed last year, but is set to reopen as an elementary school in fall of 2017.

When ‘Option 5’ came up at the March 21 meeting, the plan to move into schools was voted down.

Ward 3 Councillor Matthew Shoemaker then tabled a motion from the floor to once again vote on ‘Option 2’.

This time, the motion passed, and two of the councillors who voted against the closure in December — Rick Niro and Judy Hupponen — now voted in favour of laying off the 32 municipal daycare workers.

“We don’t know what went wrong between [December] and March to make them change their minds,” said Guido, adding, “They had us fooled.”

As a result, the three municipal daycare centres will close in December 2017, but Guido suspects the city will move the children under their care into the schools before then.

Guido said municipal daycare workers even consulted on the construction plans for one of the proposed centres.

“It’s unfortunate because there was three of our staff members that actually went to St. Basil and they did the blueprints with some people, with the architects,” said Guido.

“To me, it’s very sneaky. You bring our people, you set up the program, you do the blueprints and it is set up for whoever moves in there — but not us,” she said.

Nick Apostle, commissioner of Community Services with the city of Sault Ste. Marie, said the city will not be moving daycare services into the schools.

“Because we have unionized employees, [moving daycare into the schools] could have succession rights implications if we were to move into them for another provider who wasn’t unionized,” said Apostle.

He confirmed city staff were consulted for the plans to add daycare operations to St. Basil.

“We were consulted and asked for an opinion on what a layout would be, and we did work with them to a certain extent, but certainly not from the standpoint of moving in,” said Apostle.

Guido said municipal daycare workers were given the impression they were being consulted for an eventual move into the schools.

“We were really hoping and thinking we would be the ones moving in,” said Guido.

Carla Fairbrother, manager of Community Child Care Services for the DSSAB, said there are no organizations currently looking to occupy the Isabelle Fletcher Public School daycare site now that the city has scrapped the idea of moving in.

Instead of the city moving in right away had they selected ‘Option 5’, Fairbrother said the daycare facility at Isabelle Fletcher will remain empty for months as the DSSAB has yet to begin its request for proposal process to find a new provider for that site.