There's a surge of spruce budworms in the region 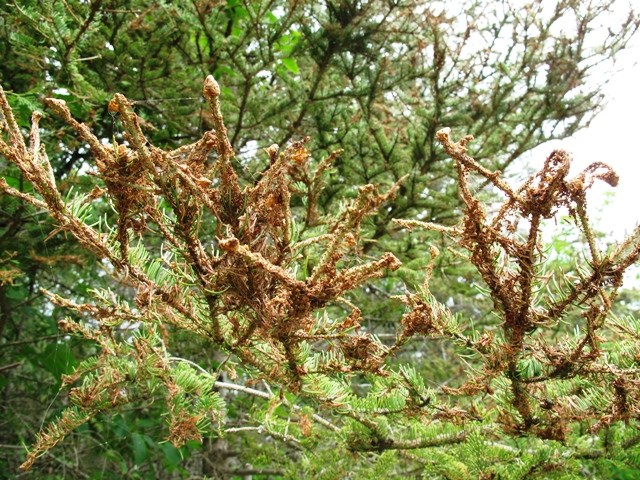 If you’ve recently noticed a reddish tinge to local evergreen trees, you’re not alone, as Northeastern Ontario is experiencing a surge in the spruce budworm, a native defoliating insect.

The Ministry of Natural Resources and Forestry (MNRF) says it’s a continuation of a natural outbreak. Two species of evergreen trees are particularly vulnerable.

“This forest pest is a free feeding defoliator that consumes the new growth on species of spruce and balsam fir and in extreme circumstances may feed on tamarack when growing in close proximity to other host trees,” said Jolanta Kowalski, MNRF senior communications officer.

It is the most destructive pest of spruce and fir forests in North America. Entomologists suggest an outbreak occurs every 30 years or so. The province of Quebec has been battling the spruce budworm for several years, and in 2019 the provincial government committed $33 million for additional aerial insecticide spraying in hopes of limiting the damage to its forests and subsequently, the forest products industry.

Reports of damaged trees are emerging from across Northern Ontario, from Thunder Bay, to the Sault Ste. Marie area, to Manitoulin Island, Sudbury, Parry Sound, and now Gogama and the Timmins area.

This pest is wastefully destructive and spreads incredibly quickly. It focuses on new growth.

“The budworm is a messy feeder that ties needles together with silk and frass (excrement) during its feeding. This bi-product gives the trees a reddish-brown appearance and it becomes much more visible during extreme dry warm conditions as the needles dry out,” said Kowalski.

Moths will emerge in late June and continue into August. The adults lay egg masses with anywhere from 15 to 50 eggs on the underside of needles. The eggs hatch in approximately 10 days. The larvae spend the winter inside the branches and emerge the following spring. It is a multi-year issue once a tree is infested.

So what can people do to save trees on their property that are showing signs of spruce budworm infestation?

“Homeowners can purchase safe insecticidal products that are registered for use on spruce budworm to provide foliage protection to smaller trees through the natural cycle. These off the shelf products are available at a local hardware store,” said Kowalski, emphasizing that the MNRF does not handle pest control on private property.

Regarding Northern Ontario’s forest and the potential for negative impacts on the forest industry, the situation is being monitored closely, and aerial spraying isn’t out of the question.

“Spraying is a tool available to manage pests on Crown land. If the spruce budworm populations show a significant increase in tree defoliation, MNRF will work with the forest industry, local citizens’ committees, and other interested parties to determine the appropriate course of action that may include the treatment of high-value forests with insecticide,” said Kowalski.

Generally speaking, three-to-five consecutive years of defoliation will be fatal for many trees and depends on the overall health and size of the individual.

“For the most part, trees that are growing vigorously can withstand a few seasons of defoliation before the damage begins to cause branch and top mortality.”

About the Author: Andrew Autio

Andrew Autio covers civic matters under the Local Journalism Initiative out of the Timmins Daily Press, which is funded by the Government of Canada
Read more