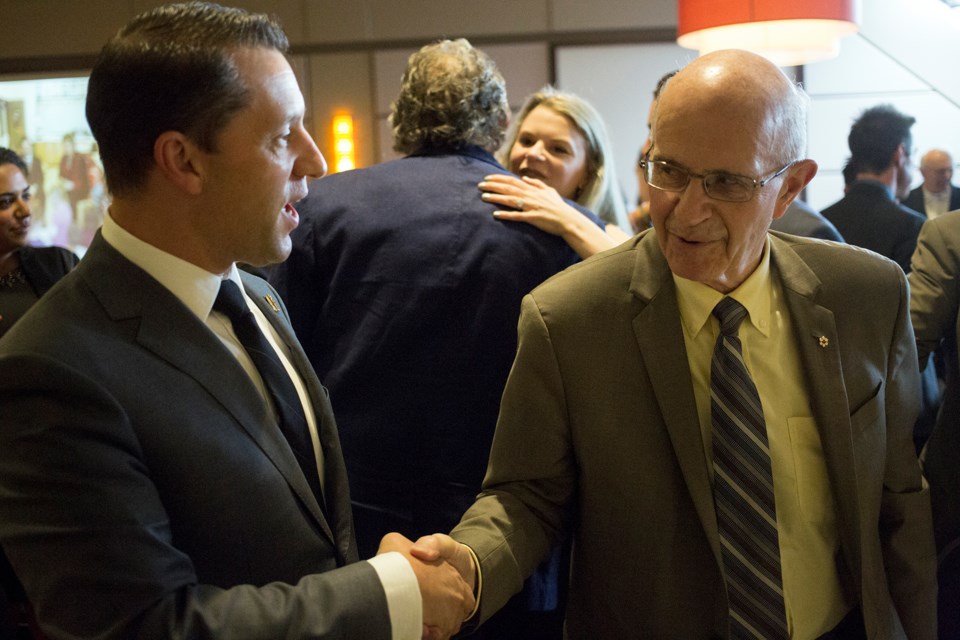 When David Orazietti was asked last night how it feels to be awarded The Honourable I.A. Vannini Award of Merit at the end of his political career, the former MPP coyly quipped, “well, you never know what might happen.”

A total of 450 people were expected to dine as Orazietti received the honour last night at the Marconi Hall.

Presenting the award last night was Former Supreme Court of Canada justice Frank Iacobucci, who was appointed Ontario’s lead negotiator in discussions about the development of the Ring of Fire mineral deposits with First Nations communities in the area.

It was in this role that Iacobucci crossed paths with Orazietti, then-MPP for Sault Ste. Marie.

“I was working on a file for the Ontario government and he was in the cabinet. So I saw him in action,” said Iacobucci.

Since his retirement from the Supreme Court in 2004, Iacobucci was appointed by then-Prime Minister Stephen Harper as a commissioner into an inquest on the alleged torture of three Arab-Canadians in Syria and Egypt, reviewed the process of First Nation representation on jury rolls in Ontario and chaired the selection committee of commissioners for the Truth and Reconciliation Commission.

The award, which is not given out every year, was given to Orazietti by the G. Marconi Society as a result of the former MPP’s 20 years of public service.

Orazietti said it is an honour to be recognized and noted his years of service were made possible by sacrifices made by his family.

“I don’t think there is a greater recognition than those that come from your fellow citizens and I am humbled by the award, which I believe largely belongs to my family,” said Orazietti.

When Orazietti stepped down as MPP in December, society president Joe Orazietti started thinking about how to recognize the achievements of his cousin.

A committee was struck within the society decided unanimously to honour the former MPP with the award.

The award is named after its first recipient, justice I.A. Vannini, and is intended to recognize members of the community ‘of Italian descent who have achieved distinction nationally or internationally in the academic, cultural or athletic fields’.

“It’s not given out every year. If there isn’t anyone we feel that deserves the award it isn’t given out,” noted the society president.

The award was last given in 2011 to joint-recipients Geno F. Francolini and professor David M. Paciocco.

Iacobucci, who is honorary chair of the Villa Marconi in Ottawa, came to the Sault in 2012 for the 100th anniversary of the founding of the local G. Marconi Society.

The retired justice notes of all the cities in Canada, the Sault boasts the highest percentage of the population that are of Italian origin, which he said stood at about 20 per cent.