Unless COVID-19 interferes, officials are also hoping to extend hours at the main downtown library starting the same day next month
Sep 22, 2020 9:00 AM By: David Helwig 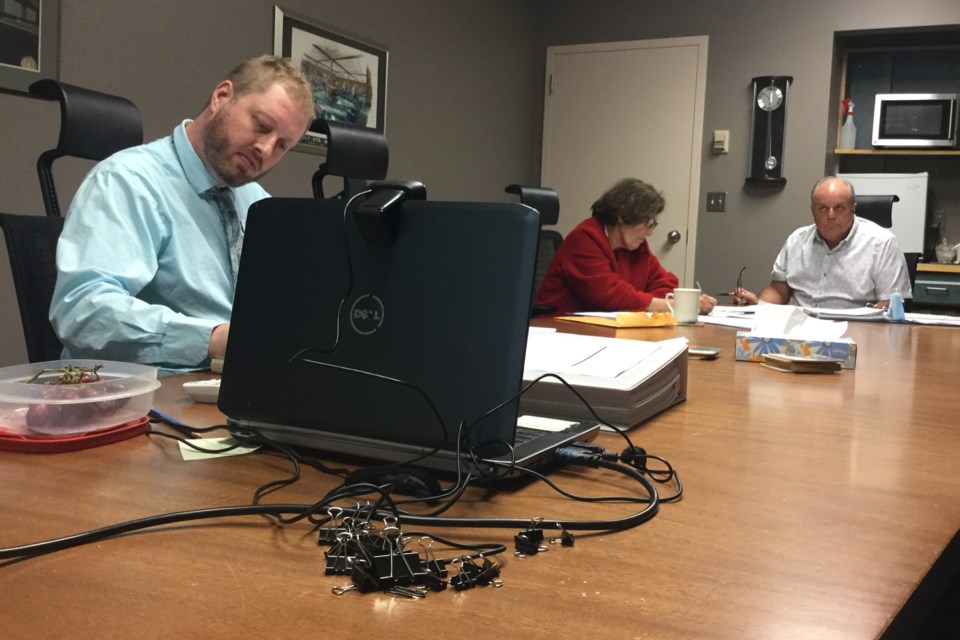 Left to right: Matthew MacDonald, Elspeth Belair and Wayne Greco at a hybrid face-to-face and teleconferenced meeting of the city's public library board on Monday, Sept. 21, 2020. Most board members attended virtually. David Helwig/SooToday

There's no telling what COVID-19 and our provincial politicians will do over the next couple of weeks, but Sault Ste. Marie Public Library is hoping to re-open its North Branch library on Northern Avenue on Monday, Oct. 5.

"This date is subject to change due to changes within the community and/or government orders," MacDonald said in a written report.

"It's hard to make any firm plans, especially when you're seeing the cases of COVID-19 going up. We have no idea how the government's going to respond to that," he told SooToday.

If conditions aren't favourable, the downtown branch could instead be forced to return to curbside pickups with visitors not allowed inside the place.

MacDonald provided few specifics about the hoped-for extended hours downtown, but said a news release will be issued once that information is decided.

Since August 17, Centennial Library has been open to the public with limited hours of operation: 1 p.m. until 6 p.m. Monday to Friday and 10 a.m. to 1 p.m. on Saturdays.

Before that, only curbside service was offered from May 26 to Aug. 16.

Curbside operations provided the first access to library materials since the facilities were closed Mar. 16 by the provincial pandemic emergency.

Initially, curbside pickup was a hit with more than 10,000 items circulated.

But as library patrons became increasingly confident in the COVID precautions taken, the popularity of curbside service flagged.

By this month, the initial 290 pickups a week had dropped to fewer than 20.

"Curbside pick-up is still being offered to those individuals that are wary to come into a public setting like a library, however the majority of people have shifted to picking up their holds inside," MacDonald says.

The downtown library's quiet study area is currently closed and most furniture has been removed from public areas.

Only 35 patrons are allowed in the downtown building at a time, but so far the library hasn't achieved maximum occupancy.

In other news, a committee is bring struck to look for ways to celebrate the Sault Ste. Marie Public Library's 125th birthday on Aug. 31, 2021.

"Also known as a quasquicentennial year, it marks an important milestone in our organization's development and history," MacDonald says.

"Though the ongoing pandemic makes it challenging to organize, plan and hold events and activities, the library should not pass up the opportunity to illustrate and celebrate that it is one of the oldest-running organizations in Sault Ste. Marie."