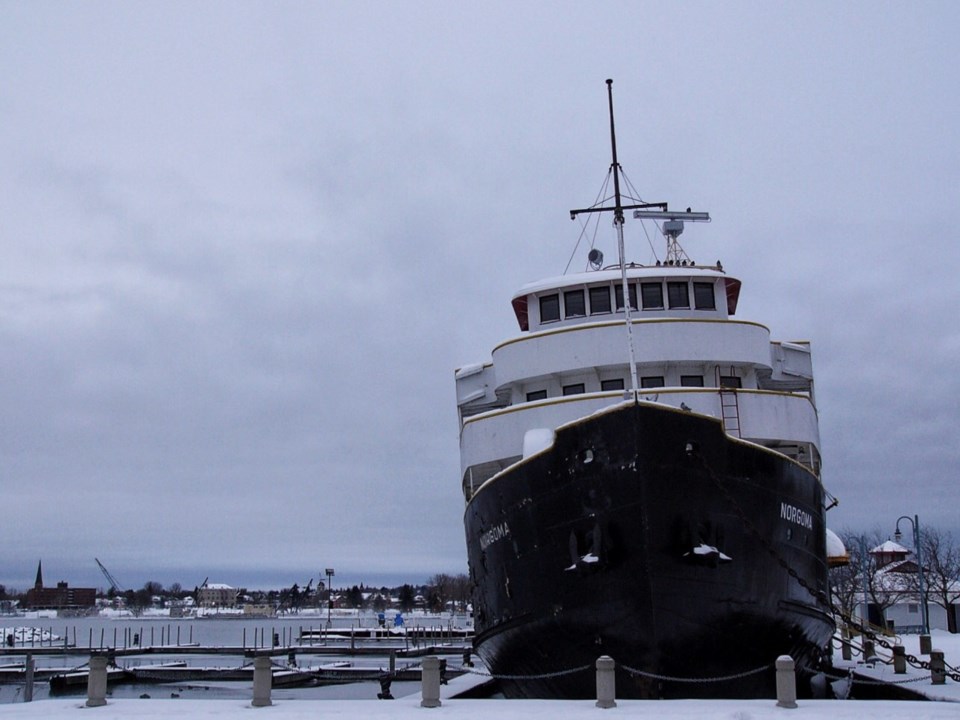 The M.S. Norgoma is pictured in this file photo. Michael Purvis/SooToday
Ward 2 Councillors Susan Myers and Sandra Hollingsworth are planning to put up a fight to save the M.S. Norgoma.
As SooToday has previously reported, City Council will vote Monday on a resolution calling for the rusting former passenger ship to be seized by the city and sold to a Chicago businessman.
The two councillors have placed the following motion on the agenda for Monday's council meeting.
The meeting will be livestreamed on SooToday starting at 4:30 p.m. Monday.
*************************
Council resolution
Mover: Councillor S. Myers
Seconder: Councillor S. Hollingsworth
Whereas the City Council-approved 2016-2020 City Corporate Strategic Plan under 'quality of life' does identify four areas of strategic focus, one being to promote and support arts and culture; and
Whereas in the introduction of the Corporate Strategic Plan it does state “The priorities identified in this plan will guide our corporation through the next five years”; and
Whereas in the City Council-approved recommendations from the community adjustment committee and included in the City Council-approved Future Sault Ste. Marie plan, cultural vitality is identified as one of four key pillars; and
Whereas on October 3, 2017 the Future SSM plan was presented to an invited group of 19 heritage arts and culture groups including the St. Marys River Marine Heritage Centre; and
Whereas at that time six recommendations were presented under the cultural vitality pillar including:
Whereas the Future SSM plan does state: “Sault Ste. Marie celebrates its history, natural and cultural heritage, and
diverse identities, transforming the city into a global centre of cultural excellence through inclusive, broad-based, meaningful participation in the sector with continual renewal and growth of its creative economy”; and
Whereas two City Council-appointed advisory committees, cultural advisory board and municipal heritage committee have reported and recommended to City Council the following:
And whereas the NORDIK Institute has come forward to the St. Marys River Marine Heritage Centre Board with a contract to provide pro bono work and develop a new strategic plan for the Norgoma; and
Whereas the Norgoma Museum Ship has seen attendance averaging more than 5,000 annually for the past four years (2017 – 5370; 2016 – 5547; 2015 – 4797; 2014 – 5445) including a special event held for 10 days in October; and
Whereas the original mandate of the St. Marys Marine Heritage Centre was to operate as a museum and tourist attraction as outlined numerous times in the 1981 agreement with the City; and
Whereas informal discussion with local tourism industry and business leaders indicates there is agreement that while the Norgoma vessel needs refreshing, there is indeed potential to expand its role as an important marine heritage tourist attraction especially with the burgeoning cruise ship visits and said leaders are willing to participate as an advisory focus group in the development of a new strategic plan; and
Whereas four summer students including special needs are employed by the St. Marys River Marine Heritage Centre,
Now therefore be it resolved that City Council not take any action towards removal of the Museum Ship Norgoma; and
Further be it resolved in consideration of CV-1, CV-2 and CV-3 above that City Council direct the appropriate staff to work with the Norgoma Board and NORDIK Institute to develop an achievable plan to enhance and sustain the Norgoma as a marine heritage culture attraction and report back to City Council on said plan.
*************************