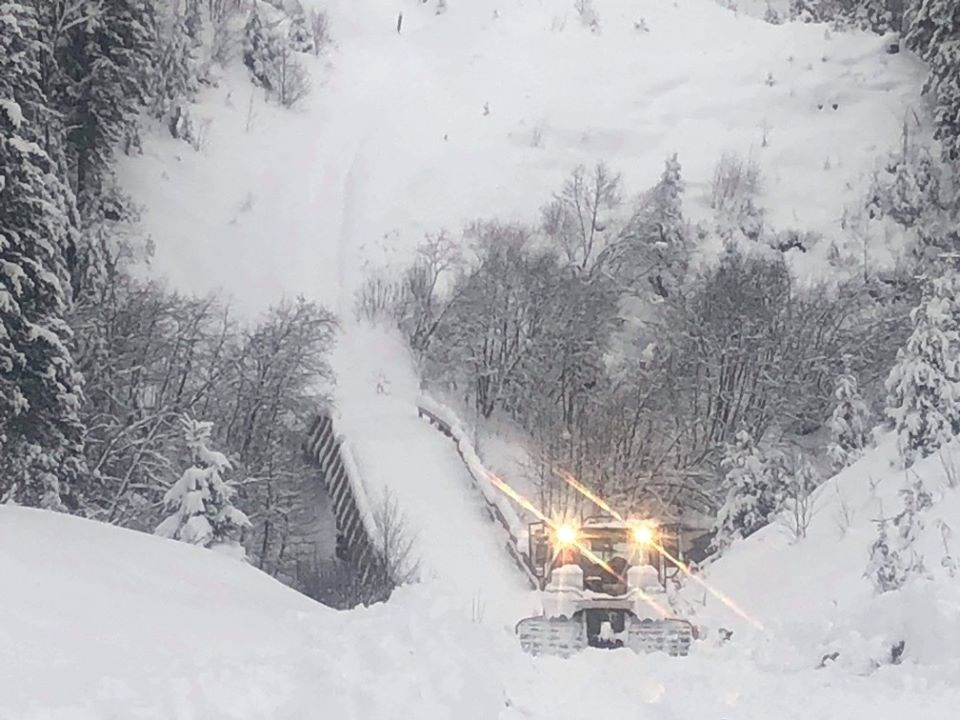 A heavy mix of rain and wet snow which has struck the Sault and area, apart from causing prolonged power outages, has also led to misery for the area’s snowmobilers.

A core group of about 20 Sault Trailblazers volunteers have been working several hours a day to clear Sault and area snowmobile trails.

But, to add to the weather woes, Breckenridge said “everyone (Sault Trailblazers volunteers) was out this morning. We got from Fifth Line to Old Goulais Bay Road and then the groomer broke down halfway through that trail. I have four groomers, but only one that’s running right now.”

“The weight of the rain and the snow on the trees brought trees right down on to the trails. I live in the Heyden area and my local trail which goes to Old Goulais Bay Road is like a tunnel. I cut for two and a half hours yesterday just so I could get through, but it’s not rideable by any means.”

Sault Trailblazers use and maintain 600 kilometres of trails in the Sault and area, with another 2,400 kilometres in the greater Algoma district.

Area trails stretch from the Sault to Goulais, Heyden, Searchmont and beyond to Halfway Haven, then eastward to Echo Bay.

“Because of this weather, it’s just amazing how many trees are down on the trails. I don’t remember it ever being this bad. We’ve had years where we’ve had to go spend some extra time on certain sections of the trails because of the weather, but this time our whole trail system is like this,” Breckenridge said.

Sault Trailblazers is one of a dozen snowmobile clubs in Algoma operating under the Algoma Sno-Plan Affiliation (ASPA) and the Ontario Federation of Snowmobile Clubs (OFSC).

“All our money goes to that one pot and then it’s allocated, and we have a little bit of money that we can do trail work with, but not enough to cover the expense of what’s happened here...(but) we’re going to try for some funding. We might get it a couple of months away, and it’ll put money back in our pockets after we’re done our work,” Breckenridge said.

“It’s definitely going to be a few days before the trails are up and running. It makes me feel frustrated because we don’t have the funding to do anything, and if we had some money then we could probably get some equipment through but that’s not a simple chore because a lot of the area is wet and swampy.”

Any help from the public to help clear the trails would be “much appreciated,” Breckenridge said, but cautioned the work can be dangerous as tree branches are cut.

Sault Trailblazers, Breckenridge said, may be contacted by email through their website

Meals on Wheels program ups its game as COVID-19 threatens its most vulnerable clients
Apr 7, 2020 12:30 PM

Ontario reports 379 new confirmed cases of COVID-19
Apr 7, 2020 11:00 AM
Comments
We welcome your feedback and encourage you to share your thoughts on this story. We ask that you be respectful of others and their points of view, refrain from personal attacks and stay on topic. To learn about our commenting policies and how we moderate, please read our Community Guidelines.