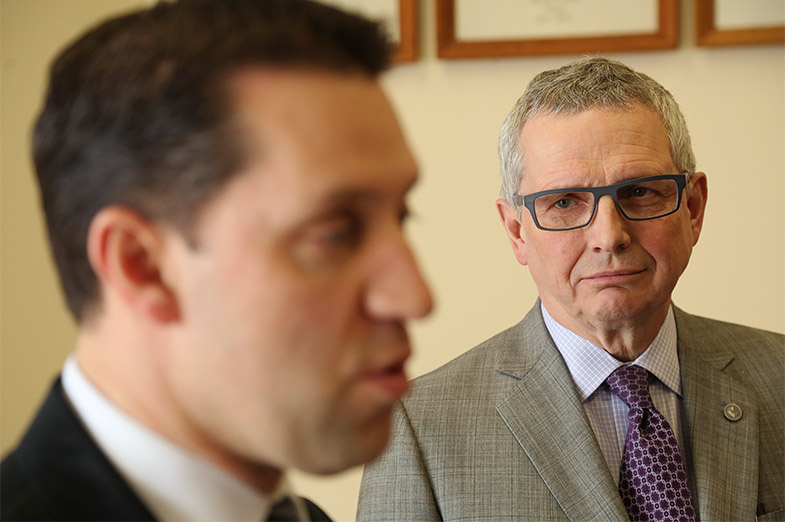 The new president and CEO of Ontario Lottery and Gaming (OLG) said it was his priority to visit Sault Ste. Marie from day one on the job.

Most recently, Rigby acted as National Security advisor to Prime Minister Stephen Harper, a role he took on in 2010.

Prior to that appointment, as president of Canada Border Service Agency, he oversaw the launch of a 4-year management improvement plan which simplified the way businesses and travellers interacted with the agency.

Rigby said his experience with transformative exercises, combined with his time in federal politics made him attractive for the position.

“What I think I bring is experience with large organizations, experience in change and mixing political policy and operational considerations into one argument,” he said.

He will draw on that experience as he steers OLG through its modernization process, which will see parts of the organization privatized while remaining under OLG oversight.

MPP David Orazietti said the Sault will continue to have a leadership role in the organization as it works through the modernization process.

“It’s one of the larger, more complicated, complex change initiatives that I have seen in many years doing these sorts of things but it is one I am confident we will see it through to a successful end.”

He said he took the job because he believes in the promise of modernization for the organization, but that doesn’t mean the course is set in stone.

“I also don’t think they would have hired me if I didn’t have ideas of my own,” he said.

Sault Ste. Marie Mayor Christian Provenzano said he is committed to continuing as an active and positive partner to OLG, as long he is satisfied they are acting in the community’s interest.

After the meeting, he said he believes they are.

“Mr. Rigby has been on the job 12 days and after 12 days it has obviously been a priority for him to be here and meet with the minister (Orazietti) and I and to express his commitment to Sault Ste. Marie. So I think it’s a positive start to our relationship,” said Provenzano.

Rigby also sees Sault Ste. Marie as being a part of the corporate fabric of OLG, continuing on the vision of his predecessor Tom Marinelli.

“I hope to come close to what Tom meant to this community. He’s been a great asset to OLG for so many years, we’re going to miss him,” said Rigby.

Marinelli, who is a long-time OLG executive and has acted as interim president and CEO since last January, is set to retire.

“It’s been a real benefit to lead an organization like OLG and the people of OLG. It’s quite humbling to come in at the bottom of the organization and make it to the top,” said Marinelli.

He has committed to spending the next few weeks assisting Rigby in taking the helm of the organization.

“The days before he retires are quite precious to me,” said Rigby.