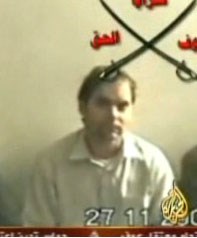 Loney and three CPT workers have been kidnapped and accused of spying by a group calling itself the Swords of Righteousness Brigade.

We love him and are praying for his safe return.

I want to be able to communicate just how loved my father is, but more than that, I just want to hug him.

I want to find a way to give him back the strength he has given me.

I want to show him how much the peace in his heart has inspired me and helped me find my way in life.

My father made a choice to travel to Iraq and listen to those who are not heard.

His belief that peaceful resolutions can be found to every conflict has been tested time and again, but he remains committed to that ideal, heart and soul.

This is very difficult for my brother and me.

We want to be with our dad again.

I didn't want him to go to a country where his American citizenship could potentially overshadow his peaceful reasons for being there.

But this is who my father is and I am strengthened by it.

I write this with the utmost respect and agreement with what he stands for.

I love my father. I am so thankful to have been raised by such a loving, honest, gentle man who continues to teach me the importance of living by my principles.

In pictures, in video, my dad looks so tired right now.

I do not care to imagine.

I struggle to even find the space to experience my own emotions.

I will continue to hold him and everyone that he is with in the Light and pray for a peaceful resolution.

*********************** A note on Tom Fox's career as a musician in the Marine Band Tom Fox was a music major in college. He graduated at the height of the Viet Nam war in May of 1973. He was already opposed to war and was unwilling to participate in the United States military actions in Viet Nam. Tom auditioned and was accepted into the Marine Band, based in Washington D.C. This fulfilled his military obligation. Tom played clarinet with the band as a professional musician in order to support his family. He received no military training. He left the Marine Band to work as a grocer.

We wish to stress again, that he was in Iraq solely for peaceful purposes and was passionate about taking an active role in giving humanitarian aid to the Iraqi people.

There were no other motives for him to go to Iraq.

Harmeet is a gentle person, softly spoken, and is an incredibly thoughtful human being.

He is an excellent squash player and artist.

He is a much-loved son, brother and uncle and an asset to his community and friends.

We ask that he be released to us safely as soon as possible.

Norman Kember, age 74, is one of the four people missing in Baghdad.

He was there for a short time to join a peace team talking and listening to people of all persuasions.

He believes that dialogue and not confrontation will lead to reconciliation.

He feels strongly that the occupation is a mistake.

He was in Iraq because of human rights abuses against the Iraqi people.

He has been a pacifist all his life beginning with his work in a hospital instead of National Service at age 18.

Before his retirement he was a professor of medical physics at St Bartholemew's Hospital in London.

As a well-known peace activist, he knows that many people are praying for his early release.

We are grateful for all the messages of support that we are receiving.