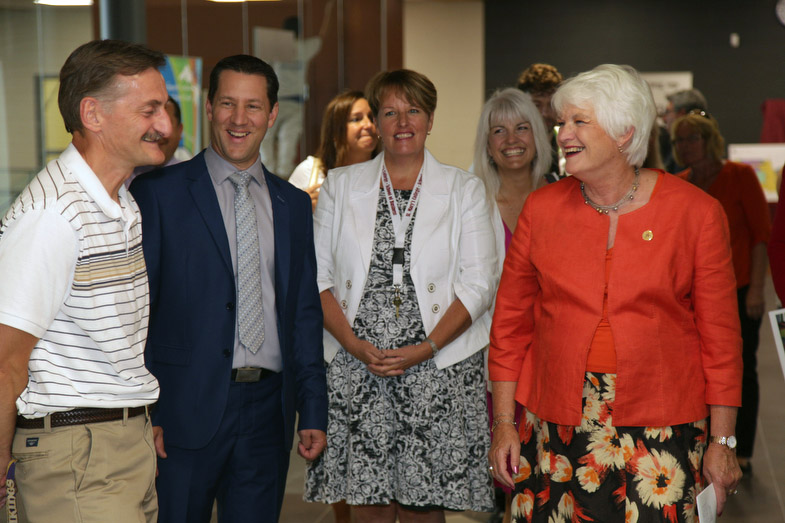 Sandals, accompanied by Sault MPP David Orazietti, visited Sault Ste. Marie Tuesday and was taken on a tour of the new school by H-SCDSB officials.

The new school stems from declining enrolment and closures of the old Mount St. Joseph College, the old St. Mary's College and the transformation of the St. Basil secondary school into an elementary facility.

Rather than focussing on declining enrolment and school closures, Sandals put emphasis on the new school's construction and enhancement of programming.

"It's a new beginning because we have staff and students coming from other schools to form a diverse and exciting new school community," Sandals told a gathering of H-SCDSB officials and reporters.

"When schools consolidate you don't just have the benefit of a bigger, and in this case, brand new facility, what it really means is the school is able to offer a broader range of credits."

"That means students in Sault Ste. Marie have more options…the staffing is available to offer a broader range of credits and to let the students really match their future interests with the credits that are available at the school," Sandals said.

"So while we're here very much to celebrate the building, we need to remember the reason for the building is the ability it provides to enhance programming for students."

There are approximately 1,200 students enrolled at the school, with capacity for 1,450.

The new school, designed by local architect Franco Pastore, cost $41 million to build with provincial funding, and was built over the course of 20 months.

Earlier this year, MPP Orazietti announced $630,000 for an expansion at East View, which includes a 1,200-square-foot addition known as a Common Area, along with renovations of the main office, library and a Cultural Room for indigenous students.

Sandals also told reporters she is hopeful tentative new collective agreements with two major teachers unions will be ratified by their members.

Sandals also expressed hope agreements with two other unions can be worked out, thereby avoiding work-to-rule sanctions and possibly a full-blown teachers strike.

Tentative agreements have been worked out with the Ontario Secondary School Teachers Federation (OSSTF) and the Ontario English Catholic Teachers Association (OECTA).

Teachers with the English Teachers Federation of Ontario (ETFO) sat down again with the province Tuesday morning.

Negotiations are also going on with the province's French language educators.

Ontario's teachers have been without a new contract since August 31, 2014.