Mayor Provenzano's bid to get rid of the M.S. Norgoma returns to City Council next month. But this week, His Worship found himself honouring the man who got the boat permanently docked at Bondar Marina
Feb 23, 2018 10:00 AM By: David Helwig 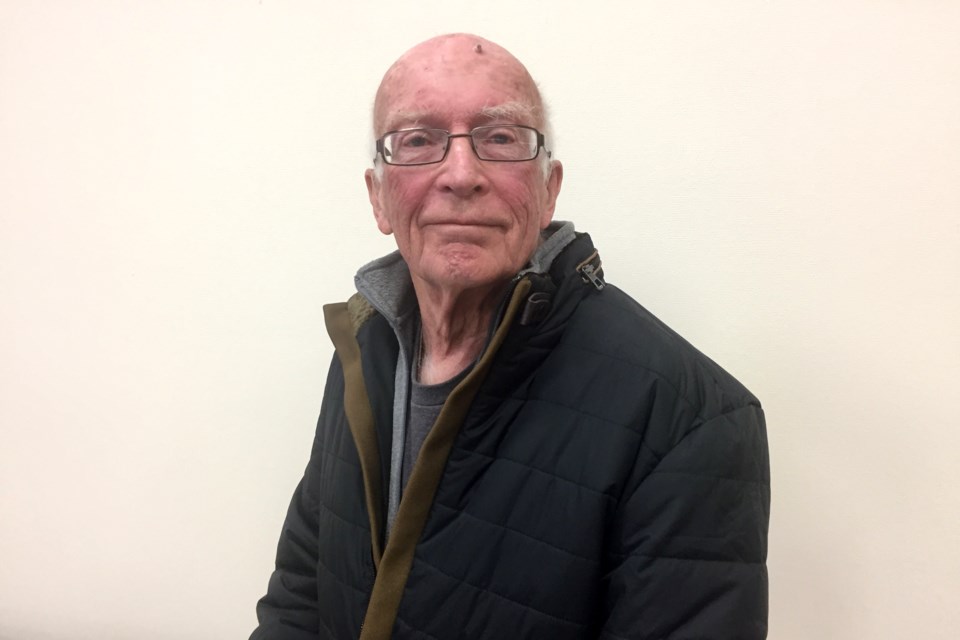 Gord Smedley, the volunteer largely responsible for putting the M.S. Norgoma on our waterfront, was honoured this week as 2018 recipient of the Municipal Heritage Award. David Helwig/SooToday

Mayor Christian Provenzano was on his excruciatingly best behaviour at this week's City Council meeting.

Hardly five months earlier, the mayor was proclaiming he wants the rusting M.S. Norgoma towed out of Roberta Bondar Marina, clear out of the Sault's downtown. "That boat has got to go!" he said then.

This week, His Worship was trilling a sweeter melody, extolling four decades of volunteer work by Gord Smedley, a man largely responsible for saving the old package freighter and getting it permanently docked on our waterfront as a tourist attraction.

Smedley, a retired architect and long-time community volunteer, was recognized as the 2018 recipient of the Municipal Heritage Award.

The honour is bestowed annually by the City of Sault Ste. Marie, with the winner recommended by the local municipal heritage committee.

Mayor Provenzano presented the Norgoma advocate with the award with his usual polished grace, even though his campaign to get rid of Smedley's rusting boat is expected to be back before City Council on Mar. 19 with two municipal committees opposing the mayor, recommending we find a way to keep it here.

Attending Tuesday night's council meeting, Smedley was back in a building he personally helped design and build in the early 70s.

The local architectural firm Gugula, Smedley and Barban worked on the Civic Centre with the renowned Toronto architects Marani, Rounthwaite and Dick, who were responsible for many of Canada's most impressive insurance and bank head offices.

Built on reclaimed land at the old ferry dock, the showpiece municipal building was intended to set the stage for urban renewal of the whole waterfront.

The old ship that Smedley laboured for 41 years to turn into a marine heritage museum is no longer worthy, in the eyes of some, to desecrate the handsomely renewed waterfront that Smedley's architectural prowess helped inspire.

Chris Tossell, another architect and a member of the municipal heritage committee, said this week's award celebrates more than Smedley's work on the museum ship.

"The award recognizes your dedication throughout your architectural career to the respect needed for heritage conservation within the city," Tossell told Smedley in a letter read at Tuesday's City Council meeting.

"I still think that your group home on the north side of Queen St. E. between Simpson and Leo is one of the nicest, most sympathetic of infill developments, in scale and in colour."

Councillors also agreed to ask two local groups, the cultural advisory board and the municipal heritage committee, to evaluate the Norgoma's cultural and heritage significance.

The municipal heritage committee usually concerns itself with fixed things like buildings, plaques and monuments.

The M.S. Norgoma doesn't fit neatly under the committee's mandate, but the group has nonetheless advised Provenzano that the retired package freighter has heritage significance.

Similarly, the cultural advisory board has written to the mayor, asking that a way be found to continue preservation work on the Norgoma and to keep it downtown.

"While recognizing that the St. Mary's River Marine Heritage Centre [the Norgoma's owner] is an independent not-for-profit corporation over which committees of council have no authority, we suggest that that the centre complete a new strategic plan," cultural advisory board members Chris Rous and Sean Meades say in a letter to the mayor and councillors.

"With a number of new members joining the board, it is hoped that the St. Mary's River Marine Heritage Centre will enjoy renewed sustainability with an increase in curatorial skill and capacity, aesthetic improvements, and thereby increased visitation."

Rous and Meades propose that the Norgoma might play a role in an idea that emerged from the recent community adjustment committee deliberations: seeking a United Nations Educational, Scientific and Cultural Organization (UNESCO) heritage site designation for the St. Marys River.

The St. Mary's River Marine Heritage Centre would be a fitting location for any interpretive features that would accompany UNESCO designation, they say.