Silvi doesn’t let anything hold her back 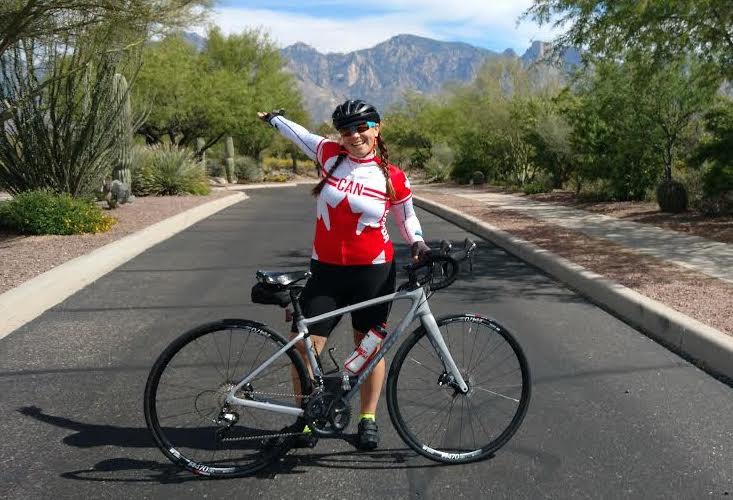 Silvi Pold, a Sault native now living in Calgary, is currently cycling across the U.S. with 19 other cyclists to raise awareness and funds for Type 1 diabetes. Photo supplied.

Silvi Pold is among a group of 20 cyclists currently pedalling across the United States in the Bike Beyond Ride, an effort to raise awareness and funds for Type 1 diabetes.

Pold, 34, a Sault Ste. Marie native who now resides in Calgary, was diagnosed with Type 1 diabetes when she was eight-years-old.

But she certainly doesn’t let the illness get her down.

“I’m a certified scuba diver, I’ve done some mountaineering, a lot of backcountry hiking and recently started cycling, I love my yoga, I do some rock climbing…any adventure I can do, I’ll try it at least once.  If I like it, I’ll go back for more,” Pold laughed while speaking to SooToday from Pittsburgh.

Pold said she had been following Beyond Type 1, a global non-profit advocacy and cure-seeking group, on Instagram for some time when the organization suddenly posted an invitation for Type 1 diabetics to cycle across the U.S. in Bike Beyond.

“At first I thought ‘oh no, that sounds awful’ because I never was a big fan of cycling, but I just couldn’t get the idea out of my head.”

Pold said the bicycle trek across America became something she felt she must do.

“I decided to apply to join the ride…once I applied there was no turning back.”

The group of 20 cyclists (19 Type 1 diabetics and one mother with a Type 1 daughter) set out from New York City June 4 on a 10-week cycling trip across America, a 4,248 mile journey which will end in San Francisco, where Beyond Type 1 is based.

Along the way, the cyclists will be making stops for education and advocacy events and fundraising opportunities in New York City, Cleveland, Nashville and Denver, with a final wrap party in San Francisco.

"This ride is all about showing what it means to live beyond Type 1 diabetes,” Pold said.

“There have been a lot of ups and downs, hard moments, some bad weather and the logistics of having 20 people trying to sort out how to get everything done has been a little bit tricky, but after the first couple of days we started hitting our stride.”

“I did quite a bit of training so I feel stronger than I thought I would feel.”

“I think the biggest thing I’m learning about myself is that I’m a lot stronger than I ever thought I was, and I’m also a bit more stubborn than I thought I was,” Pold chuckled.

Unlike the common Type 2 diabetes, which is acquired in adulthood and caused largely through lack of exercise and an unhealthy diet, Type 1 diabetes is a result of genetics or exposure to certain viruses, and usually manifests itself during childhood or teen years (though it can, like Type 2 diabetes, also begin in adulthood).

There is no cure for Type 1 diabetes, but it can be managed by taking insulin and other medications, keeping an eye on blood sugar levels, eating healthy, getting regular exercise and maintaining a healthy weight.

Type 1 diabetes can cause kidney damage, eye damage, nerve damage in the feet, skin and mouth conditions and pregnancy complications.

“There’s no cure yet but I think someday there could be, but even better treatment would be amazing.  When I was diagnosed in 1989, the treatment I’m using now versus then has come a long, long way, but its definitely not a cure.  Insulin’s a tricky thing,” Pold said.

Each cyclist in Bike Beyond has a personal fundraising goal, with Pold having raised over $5,700 so far.

“Don’t let it (Type 1 diabetes) hold you back,” Pold advises.

“It’s not easy, it makes things harder but it doesn’t make things impossible. You just need to know what your limits are, put in a little bit of extra planning and foresight, and pretty much anything is possible.”

“I don’t want to see people sit on the sidelines and not get out there and do something they’re really passionate about just because of diabetes. I just don’t think it should hold anybody back from doing anything,” Pold said.