Ship aground in St. Marys river

A Canadian lake freighter which ran aground in the St. Marys River will be stuck there for a while, said a US Coast Guard official. The US Coast Guard were called at around 1 a.m.
0
Apr 22, 2015 6:13 PM By: Kenneth Armstrong 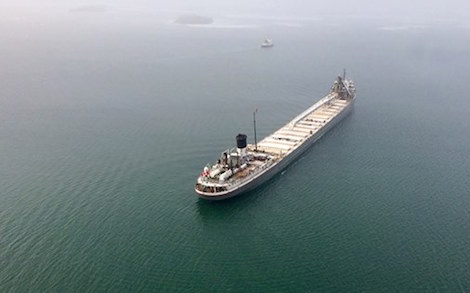 A Canadian lake freighter which ran aground in the St. Marys River will be stuck there for a while, said a US Coast Guard official.

The US Coast Guard were called at around 1 a.m. this morning and informed of the 603-foot Mississagi bulk carrier that had run aground in Potagannissing Bay, at which time a search and rescue team was sent out to board the vessel.

“There was no reports of injury and no pollution and that was confirmed,” said Lieut. Erica Brewton, command duty officer for United States Coast Guard in Sault Ste. Marie, Michigan.

The freighter was carrying a load of stone from Bruce Mines, Ontario but ran aground near De Tour Village, Michigan, south of St. Joseph Island.

“It didn’t get too far,” said Brewton.

Coast Guard inspectors have been sent out to investigate the damage and will report back tomorrow.

In the meantime, the owners of the vessel are creating a salvage plan for the vessel.

“We’re hoping they start that plan Friday,” she said.

The following is a news release from the U.S. Coast Guard:

The motor vessel Mississagi, a Canadian-flagged bulk carrier with a load of stone, was transiting downbound the St. Marys River from Bruce Mines, Ontario, when it ran aground in the Potagannissing Bay approximately 4 miles northeast of De Tour Village.

At about 1:00 a.m., the master of the motor vessel Mississagi notified a watchstander at Coast Guard Sector Sault Ste Marie, Michigan, that the carrier was hard aground on shoal water in the vicinity of De Tour Village.

Vessel navigation in the St. Marys River is currently unimpeded.

Coast Guard marine inspectors from Sector Sault Ste Marie will board the vessel to survey the damage.

The crew of the motor vessel Mississagi is working with the Northeast Tech Salvage Company to create a salvage plan.

The crew of the Coast Guard Cutter Buckthorn is scheduled to conduct aids to navigation verification.

The Coast Guard is also establishing a 500-yard safety zone around the vessel.